The great irony here is that this accurate and helpful data point is provided by a very anti-ACA story, but whatever:

A total of 243,230 Ohioans have already been added to the state’s Medicaid rolls under the Obamacare expansion implemented by Republican Governor John Kasich this January.

Based on the Ohio Department of Medicaid’s May caseload report released last week, enrollment under the expansion was 232,711 in April — not the 184,671 reported last month.

The March enrollment figure was also revised dramatically upward last week, to 208,213 from the 171,910 reported last month. In April, the Ohio Department of Medicaid estimated that March enrollment for those eligible under Obamacare was 106,238.

The promise and the problem with "Fact Checking" (UPDATED)

This morning, Glenn Kessler of the Washington Post discussed former HHS Secretary Kathleen Sebelius's recent quote, speaking at a rally, that "There are now 22 million people with affordable coverage thanks to the Affordable Care Act, and that’s a big deal and that number will grow.”

As regular visitors to this site know, my own "estimated total, all sources" number shown on The Graph currently ranges between 24 - 29 million people...but is in turn broken down into different types of enrollments, with different caveats, disclaimers and so forth depending on what criteria you're trying to measure.

In the case of Sebelius's quote, Kessler is attempting to parse 3 specific points: The number (22 million); the description ("affordable coverage") and the credit ("thanks to the ACA").

Add Georgia to the list of states where the "Obamacare is socialism!!" meme seems to be having trouble taking hold:

ATLANTA ‑ UnitedHealthcare, Coventry, Cigna and Time Insurance Company have each submitted plans with the state to offer insurance in the federally run health care exchange in Georgia next year.

Also, you may recall a nice graph by Dan Diamond from a couple of weeks back showing the states which are increasing their exchange competition for 2015; I've crudely updated it with new competition data from 4 additional states: Connecticut, Maryland, North Carolina and Georgia (plus one more added to Kentucky since he posted it):

Comprehensive review of every vaccine study under the sun proves what we already knew: Vaccines are safe, effective & DON'T CAUSE AUTISM.

Not that any of this will appease anti-vaxxers any more than solid, comprehensive, overwhelming scientific evidence will get Climate Change Deniers, Obama Birthers, 9/11 Truthers or the Flat Earth Society to let it go already, but I'm presenting it here anyway:

The researchers, from the RAND Corporation, searched databases of scientific literature for vaccine-related studies, turning up 20 ,478 in total. This included studies of childhood vaccines — such as DTaP (diphtheria, tetanus and acellular pertussis), hepatitis A, hepatitis B, influenza, meningococcal, MMR (measles, mumps and rubella), and varicella — as well as adult vaccines such as flu shots.

Then they boiled this number down to 166 controlled studies — the gold standard of scientific research — in order to directly compare the effects of being vaccinated with the effects of getting a placebo injection or no vaccination.

CRUCIALLY, THEY FOUND ABSOLUTELY NO LINK BETWEEN CHILDHOOD VACCINES AND AUTISM SPECTRUM DISORDERS

With the addition of some new enrollment data out of Kentucky and Minnesota, I've updated the Off Season QHP Enrollment chart. Note that the available data only includes states representing about 8% of the total enrollments nationally, and even some of those are only updated through early May, so the numbers will no doubt bounce around a lot as fresh numbers come in.

I plan on only updating both the Off Season chart as well as The Graph on the 1st and 15th of each month, unless there's major new data which comes in (like, say, from CoveredCA...hint, hint...). 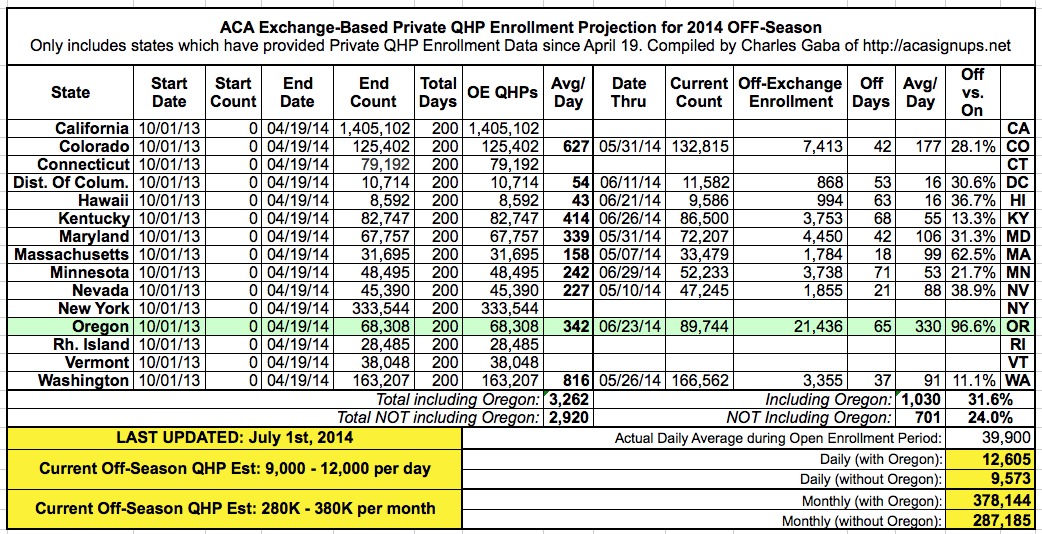 The data showed how many people across New York signed up for private health insurance plans, enrolled in Medicaid and took advantage of Children's Health Plus.

In total, nearly 1 million people got health insurance coverage through New York State of Health, or about 5 percent of the state's population. The exchanges were created by the Affordable Care Act.

The cognitive dissonance of the Republican Party (otherwise known as "hypocrisy" or simply "chutzpah" in layman's terms) is amazing.

Remember the complete FAIL of the Healthcare.gov launch last October? Remember how Republicans were screaming from the hills about a Canadian firm (instead of a U.S. based one) winning the largest site development contract, and then proceeding to utterly botch the job? Remember how the same company, CGI of Montreal, also dropped the ball in several of the state-run exchanges, including Hawaii, Vermont, and most infamously, Massachusetts???

LANSING, MI -- Michigan has awarded a $90 million contract to the Canadian tech company that built HealthCare.gov despite rollout problems with the federal website and a lower bid from another company.

There's a bunch of data updates to The Graph on both the QHP and Medicaid side, but the biggest change is the new Medicaid enrollee data out of California, which has jumped up by a whopping 789,000 people from the last data that I had. Note that many of these may be stuck in a major backlog, in which case this number may or may not continue to grow substantially over the next few months as they're processed.

Almost all of the other data is also on the Medicaid side, of course, as Michigan, Kentucky, West Virginia etc. continue to quietly add expansion & woodworker enrollees to their tallies.

Finally, the estimated QHP total now sits at around 8.6 million (around 8,000 per day since the end of open enrollment, although this rate will likely drop down a bit as we move into the late summer and fall). On the other hand, that 8K/day is at the lower end of my current estimated range (currently estimated at between 9,000 - 12,000 per day, although this will fluctuate as more state exchange data comes in), so who knows?

Michigan: ACA Medicaid expansion up to 315K (63% of total eligible!)

Michigan's belated Medicaid expansion program continues to grind along...not only is MI up to 96% of the first year goal already, it's actually up to 63% of the total number who are eligible state-wide!

Minnesota: QHPs up 3,738 since end of Open Enrollment

The Kaiser Family Foundation estimated that WV has 143,000 residents eligible for Medicaid expansion. This means the state has now enrolled nearly 89% of them:

"The fast-track enrollments, on average, cost West Virginia about $6.50 less than would a full Medicaid application," the report states, estimating the staff worker received $14 dollars per hour.

Multiplying the 71,860 people who enrolled by that dollar amount provided a savings of roughly $470,000, according to the report. The state spent $200,000 in IT upgrades that also allowed it to mine the SNAP data base for potentially eligible residents. Subtracting those costs, the report argues the state saved about $270,000.

Bowling said the most up-to-date data show about 128,000 people have joined Medicaid through the expansion, much more than the roughly 91,000 anticipated to sign up. She said that success means the state probably won't send out another round of letters, but the numbers keep rising as those eligible may sign up at any time.

Some days I forget just how friggin' HUGE the state of California is...

Part of the delays can be attributed to high demand. In California, as in many of the 26 states that opted to expand Medicaid eligibility under the Affordable Care Act, people turned out in much higher numbers than projected. The state health department said it now expects 2.2 million people to enroll in Medi-Cal by next month -- 300,000 more than estimated last fall.

Roughly 1.4 million of those applicants were newly eligible for Medi-Cal, which was expanded under the Affordable Care Act, commonly called Obamacare, to serve people who earn up to 138 percent of the federal poverty level. About 600,000 more were previously eligible for coverage but had not enrolled. Experts say the massive outreach campaigns across the country helped alert many of these people to their eligibility.

While the massive backlog issue is a serious problem, this story does give some nice solid numbers to plug into the Medicaid spreadsheet for the largest state in the country:

Kentucky: Another 29K headaches for Mitch McConnell, & at least 78% of Medicaid-eligible enrolled!

A nice unofficial update from Kentucky...but again, no QHP/Medicaid breakout. As I did last time, I'm going to play it cautiously and assume 90% Medicaid & 10% QHPs; since the combined total was around 421,000 last time, this brings the totals up to around 87,000 exchange QHPs and 363,000 Medicaid enrollees;

Sebelius later tweaked Sen. Mitch McConnell of Kentucky by pointing out that Kentucky’s state health insurance program, the Kentucky Health Connector, now has 450,000 people enrolled in it and many of them had no health care before.

OK, I could be dead wrong about this; if so, I've provided a second Hobby Lobby-related item to justify having this blog entry. Let me put the 2nd item out there just in case:

The Washington State Insurance Commissioner just issued an interesting immediate response to the SCOTUS Hobby Lobby decision...interesting, because I'm a bit surprised that a state insurance commissioner (which I generally thought of as a fairly non-partisan job...although this jackass from Georgia obviously proved me wrong on that one) would post something like this, especially so quickly: