Kentucky: Another 29K headaches for Mitch McConnell, & at least 78% of Medicaid-eligible enrolled!

A nice unofficial update from Kentucky...but again, no QHP/Medicaid breakout. As I did last time, I'm going to play it cautiously and assume 90% Medicaid & 10% QHPs; since the combined total was around 421,000 last time, this brings the totals up to around 87,000 exchange QHPs and 363,000 Medicaid enrollees;

Sebelius later tweaked Sen. Mitch McConnell of Kentucky by pointing out that Kentucky’s state health insurance program, the Kentucky Health Connector, now has 450,000 people enrolled in it and many of them had no health care before.

OK, I could be dead wrong about this; if so, I've provided a second Hobby Lobby-related item to justify having this blog entry. Let me put the 2nd item out there just in case:

The Washington State Insurance Commissioner just issued an interesting immediate response to the SCOTUS Hobby Lobby decision...interesting, because I'm a bit surprised that a state insurance commissioner (which I generally thought of as a fairly non-partisan job...although this jackass from Georgia obviously proved me wrong on that one) would post something like this, especially so quickly:

In which I apologize to Mr. Conover: Yes, if you count fractions of people as human beings, he was absolutely correct.

Chris Conover has responded to both of my items from yesterday. Let's take a look:

Let’s start with this howler: “Actually, the Obama administration never said that they’d reach 7 million paying customers by March 31st.”Seriously? Has Mr. Gaba really not read the September 5, 2013 memo from Marilyn Tavenner (chief of Centers for Medicare and Medicaid Services) titled Projected Monthly Enrollment Targets for Health Insurance Marketplaces in 2014? Table 2b of that memo clearly shows an enrollment target of 7,066,000 for March 31, 2014. End of story.

The other day, Paul Krugman posted a short blog entry over at the New York Times in which he laid out 6 of the biggest anti-ACA attack points which have been, in his view, completely obliterated by reality:

In response, Chris Conover has posted a piece over at Forbes which claims to rebut Prof. Krugman point by point, basically calling him full of beans on 4 points and "generously" giving him a split decision on 2 others.

Chris Conover's Truth Twisting on the ACA: Part One

The other day, Paul Krugman posted a short blog entry over at the New York Times in which he laid out 6 of the biggest anti-ACA attack points which have been, in his view, completely obliterated by reality:

In response, Chris Conover has posted a piece over at Forbes which claims to rebut Prof. Krugman point by point, basically calling him full of beans on 4 points and "generously" giving him a split decision on 2 others.

Yesterday I finally got around to actually plugging the post-4/19 data to date into a spreadsheet to clarify my earlier "off-season" estimate of 200K - 300K exchange QHP enrollments per month (it was actually more like 230K - 330K).

Today, Maryland issued their latest report, which brings their data up through May 31st. After entering the new data, the overall projection chart has jumped dramatically and now stands at between 270K - 360K per month: 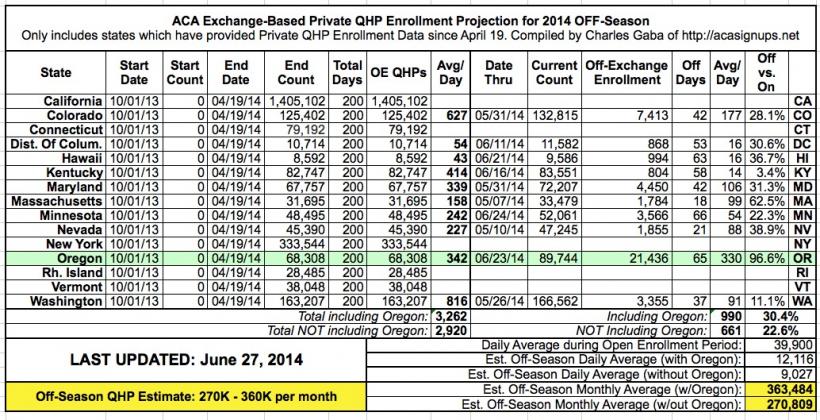 As I noted this morning, the Maryland Health Exchange has released an updated enrollment report running through the end of May (the June report will be out at the end of July):

As of May 31, 300,310 individuals have gained Medicaid coverage in 2014 and remain active in Medicaid. This includes the 95,889 PAC enrollees who were automatically converted on January 1, 2014 to full Medicaid coverage.

As of May 31, 72,207 individuals have enrolled in a qualified health plan.

Compared with the previous report, MD had a 4,300 QHP increase from 5/10 - 5/31, and an increase of 4,450 since the end of the open enrollment period. This means that they're averaging around 106 per day, or 31% of their average rate during open enrollment...which has had a significant impact on the Off-Season Projection Chart that I started posting yesterday (as you can see, MD had been only running 2% of the OE rate until now).

Not sure how I missed this yesterday; thanks to Steve C. for the heads' up:

The Obama administration on Thursday plans to issue much-anticipated instructions for Americans to reenroll for next year in the new federal health insurance marketplace — a set of rules intended to make it easy for consumers but that nevertheless will require some people to reapply through HealthCare.gov to preserve their subsidies or coverage.

Under the rules, people will need to do very little to remain in their health plans if their incomes and covered family members are not changing and their plans are offered again for 2015.

All 17 of the insurance companies participating in the federal ACA exchange this fall for Year Two of open enrollment have released their preliminary rate requests for 2015. It's important to stress preliminary, since the rates still have to be approved by the HHS Dept. Update: State insurance commissioner.

There could be some sticker shock, but some welcomed price cuts as well, when consumers go shopping for insurance this fall on the Michigan Health Insurance Marketplace, according to numbers the state released earlier today.

Overall, it appears that Michigan’s proposed average rate increase of just 2.2% is modest compared to changes in some other states, according to an ongoing analysis by consultant PricewaterhouseCoopers that so far has compared insurance pricing on more than a dozen state marketplaces. 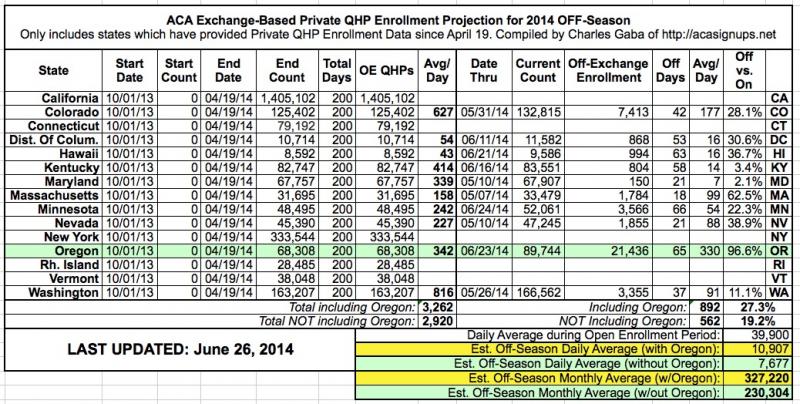 Only 58 more QHPs but, interestingly, 104 more people on SHOP plans...

Over the years there have been a whole mess of court cases challenging the ACA, either en masse or sections thereof, and most of them have either been dismissed or absorbed into the law. The most famous of these was NFIB v. Sebelius, otherwise known as "the SCOTUS decision which upheld the ACA overall but made Medicaid expansion optional instead of mandatory."

Basically, the SCOTUS ruled that Congress couldn't enforce the individual mandate using a financial penalty, but it was all good because it isn't really a penalty, it's a tax, which Congress has every right to impose. Yup, the entire law hung in the balance over the semantics of a single word, which happens more often in court cases than you'd think.

However, there's still a half-dozen assorted cases left to be decided, and while most of them nibble around the edges of the law, one of them could potentially cause an epic clusterf*ck if it's successful: Halbig v. Burwell.

Three stories which didn't seem worthy of their own full blog entry but each of which are pretty interesting...

In a letter sent to health insurers this morning, Kreidler reminded health insurers that exclusions and denials of coverage on the basis of gender identity are against the Washington Law Against Discrimination (RCW 49.60) and the federal Affordable Care Act (Section 1557).

...“Transgender people are entitled to the same access to health care as everyone else,” said Insurance Commissioner Mike Kreidler. “Whether specific services are considered medically necessary should be up to the provider to decide on behalf of their patient.”

I contacted the NY State of Health exchange a couple of weeks back and spoke a couple of times with a very nice media relations woman who explained that yes, a highly-detailed, comprehensive enrollment report would be released sometime in late June, but that no, it wouldn't include any information about exchange enrollment since the end of the first Open Enrollment period (ie, the extension period which ended on April 15th).

She said that she'd see about trying to get "off season" enrollment data back on the agenda, but just like the HHS Dept. running 36 other states, it looks like NY has decided not to bother. This leaves me crossing my fingers that California will release their off-season data sometime soon; since CA handles almost 20% of the total enrollments by itself, that (combined with the other half-dozen state exchanges providing regular updates) should be enough to extrapolate for the rest of the country. NY is the 2nd largest exchange, however, so it would've been helpful if they'd done so as well.