How much could YOUR insurance company end up having to pay you thanks to the Risk Corridor ruling? 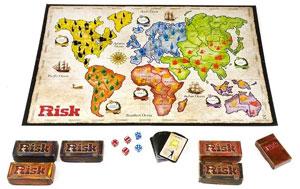 One of the biggest non-COVID19 related healthcare policy stories in the news this week was the Monday ruling by the U.S. Supreme Court stating that yes, the federal government does, in fact, have to keep its contractual obligation to make $12 billion in payments legally owed to a bunch of health insurance carriers.

As I've explained many times over the years, the idea behind the ACA's Risk Corridor program was that the launch of the major ACA regulations starting in 2014 involved such a radical reworking of requirements for private health insurance policies (especially on the individual market) that it was unreasonable to expect insurance companies to be able to accurately predict how well or poorly they would fare under the new rules. While the "free market" is supposed to be a "sink or swim" environment, it was agreed that this was so dramatic a change that the carriers should be given "training wheels" of sorts to smooth out the bumpy ride for the first three years.

There were three programs put in place, known as the "3 R's": Risk Adjustment, Reinsurance and Risk Corridors. The first program is permanent and continues (mostly) quietly until this day; it basically helps mitigate cases where certain carriers are unfortunate enough to have only the riskiest enrollees dumped on them. The second program (reinsurance) sunsetted after three years, but has since been reinstated at the state level by over a dozen states.

And then there's the third program, Risk Corridors. I wrote a lengthy explainer about how they were supposed to work and what happened here.

The bottom line is that in the end, the federal government essentially stiffed federal contractors (the carriers) out of over $12 billion in payments due. $10.9 billion of this is for the Individual Market (mainly ACA exchange plans); the other $1.3 billion is for the Small Group market, which was less radically (if still significantly) recreated by the ACA. These payments were supposed to be paid out over the course of 2015, 2016 and 2017. The actual total was somewhat higher, but only a few hundred million was ever actually paid, leaving the $12.2 billion balance, which is what the carriers were suing over.

OK, so the SCOTUS ruled that the feds have to pay up. Normally that'd be the end of it--the insurance carriers and their shareholders will be happy, but it shouldn't really impact anyone else beyond tacking another $12 billiono onto the national debt, right?

Well, not quite. As I explained the other day, there's a good chance that a significant chunk of that same $12 billion will end up being paid back to insurance policyholders in the form of Medical Loss Ratio rebates!

I did make sure to include plenty of caveats:

Remember, the way the MLR rule works is that the carriers are limited to a 20% gross margin, calculated over a 3-year rolling average basis. If they come up at, say, a 78% MLR using that formula, they have to pay 2% of their gross revenue out in rebates. In some cases they'll already be below the 80% threshold before the RC revenue is added, in which cases all of it would have to be paid back. In other cases, the RC payment might only knock their MLR down from, say, 85% to 83%, in which case they wouldn't have to pay back a dime. Some carriers will have to pay a portion of it back (if it brings them from 81% to 79% or whatever).

WITH ALL THIS IN MIND, I decided to take a crack at figuring out just how much money could potentially be paid out in MLR rebates, and to how many people. Here's how I did it:

Note that I'm only focusing on the individual market here. Around $1.3 billion in RC payments are owed to small group carriers as well, but the Indy market is already a pretty big project. I might go back and do the same for the sm. group market as well in the future.

In some cases you'll note that the number of enrollees is shown as either "0" or "n/a". Zero means they didn't have anyone enrolled in 2018, likely because they had left the market in that state between 2016 and 2019. "n/a" means that the carrier isn't listed in the 2018 MLR files at all--as I noted above, some went out of business or merged with/were bought out by other carriers.

I'll reserve any other commentary until after the actual tables (click images for high-res versions): 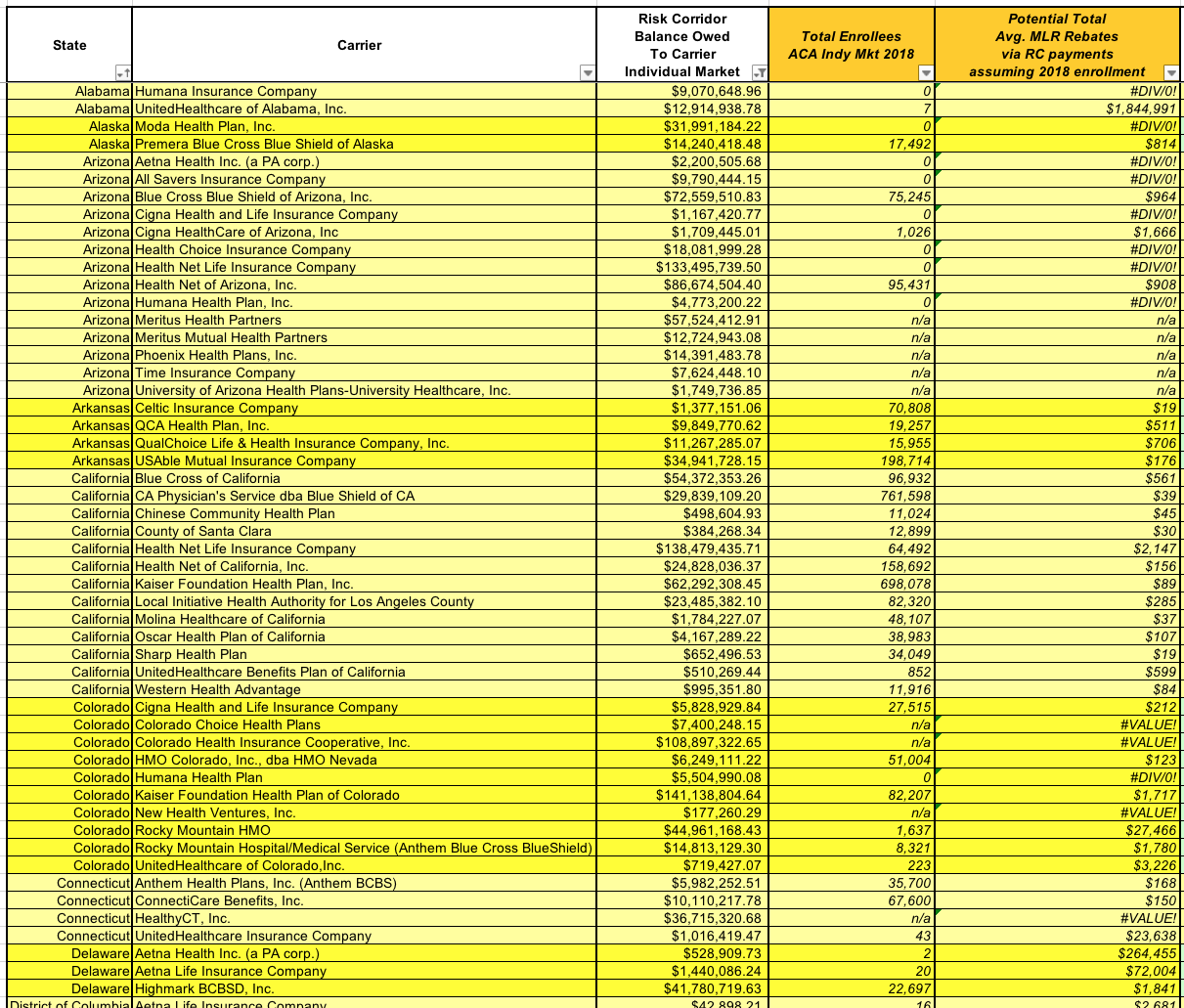 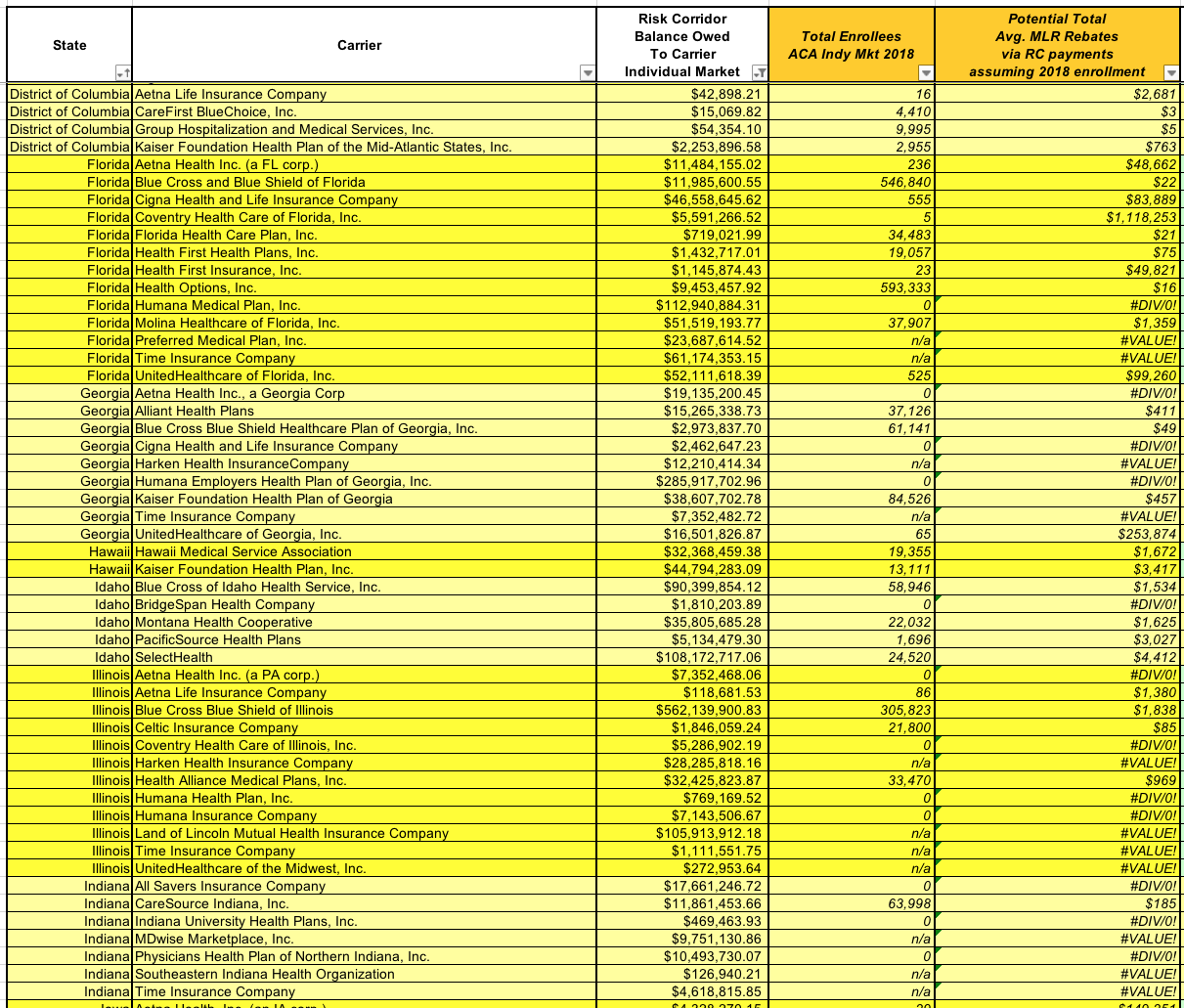 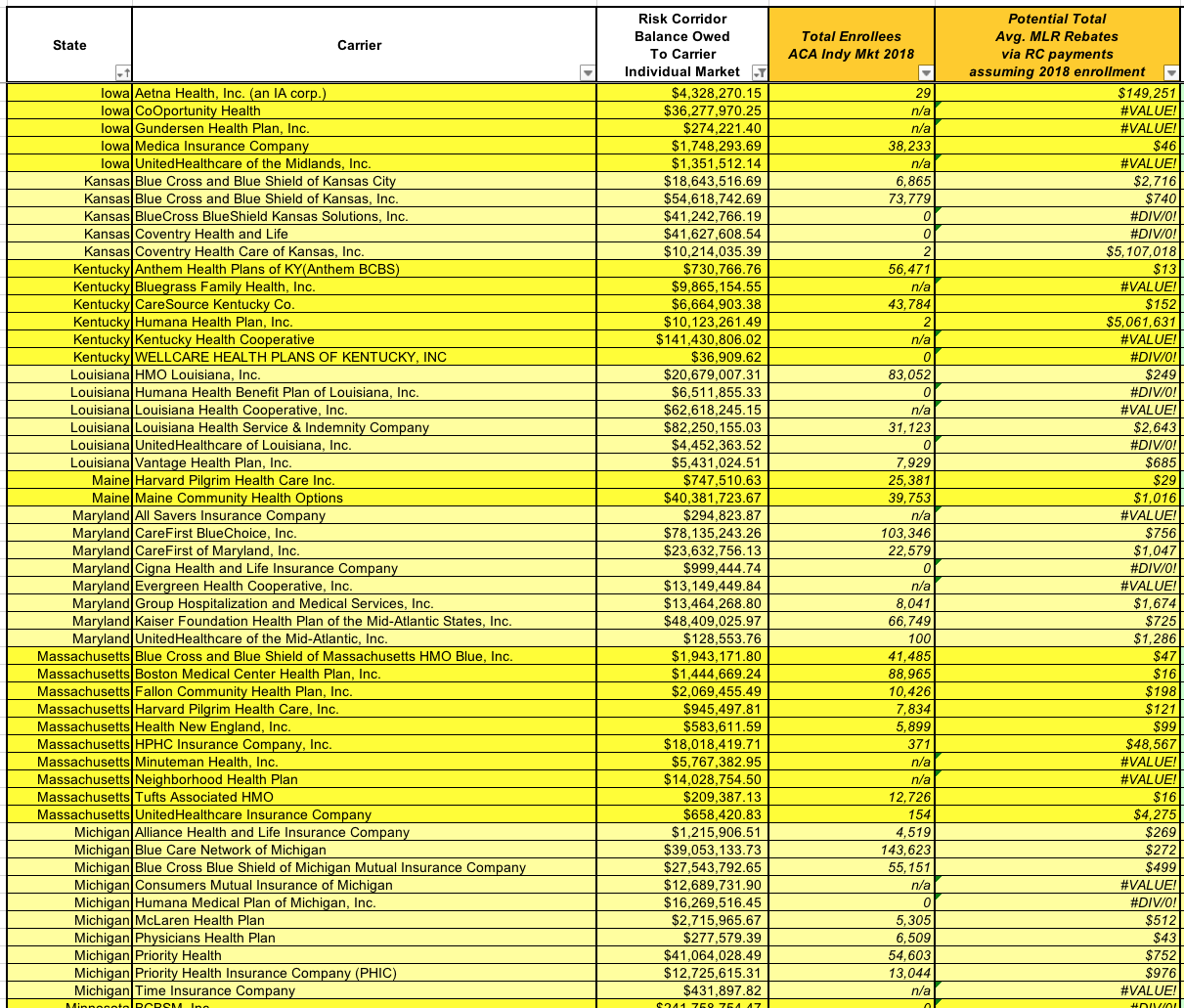 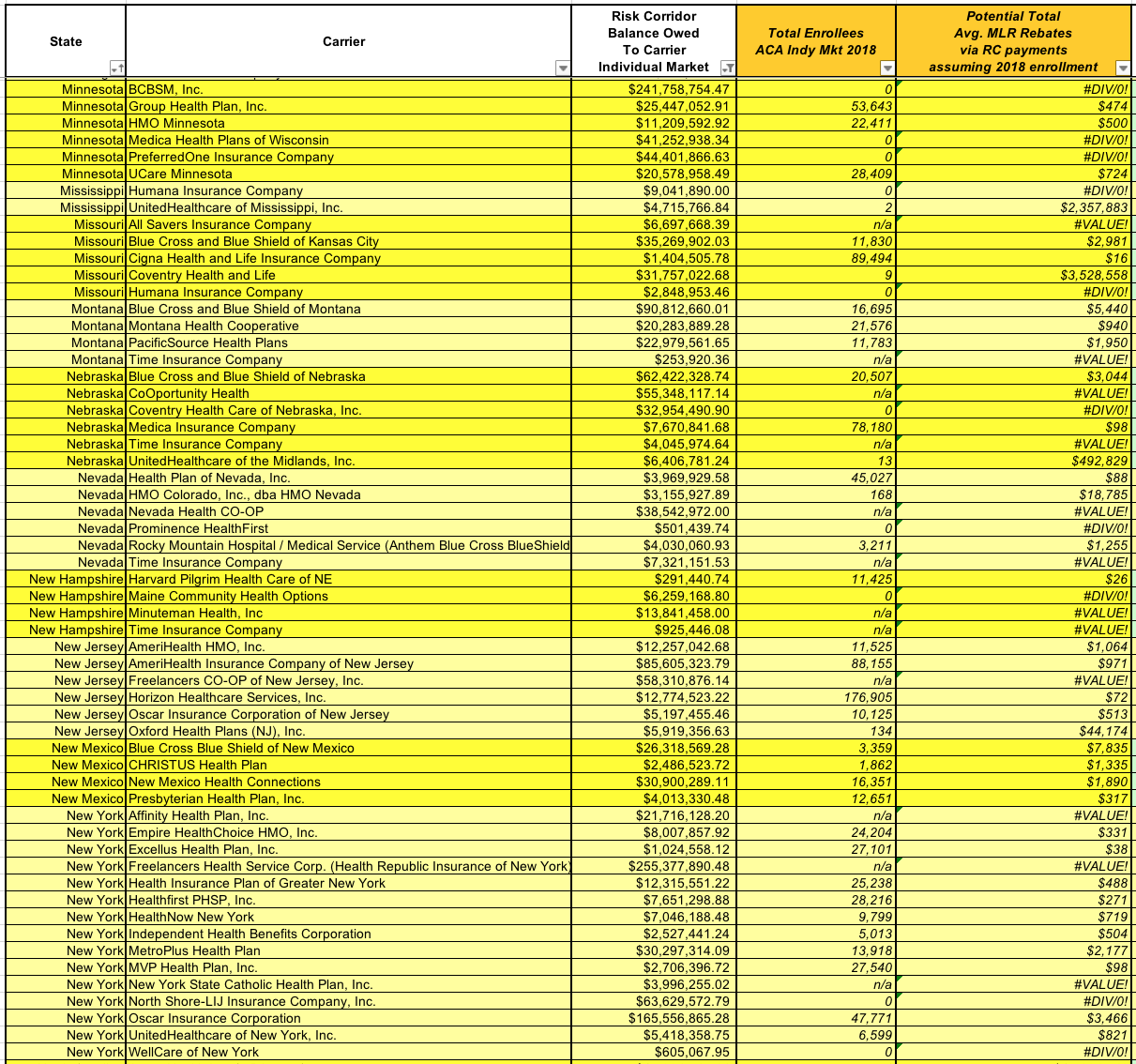 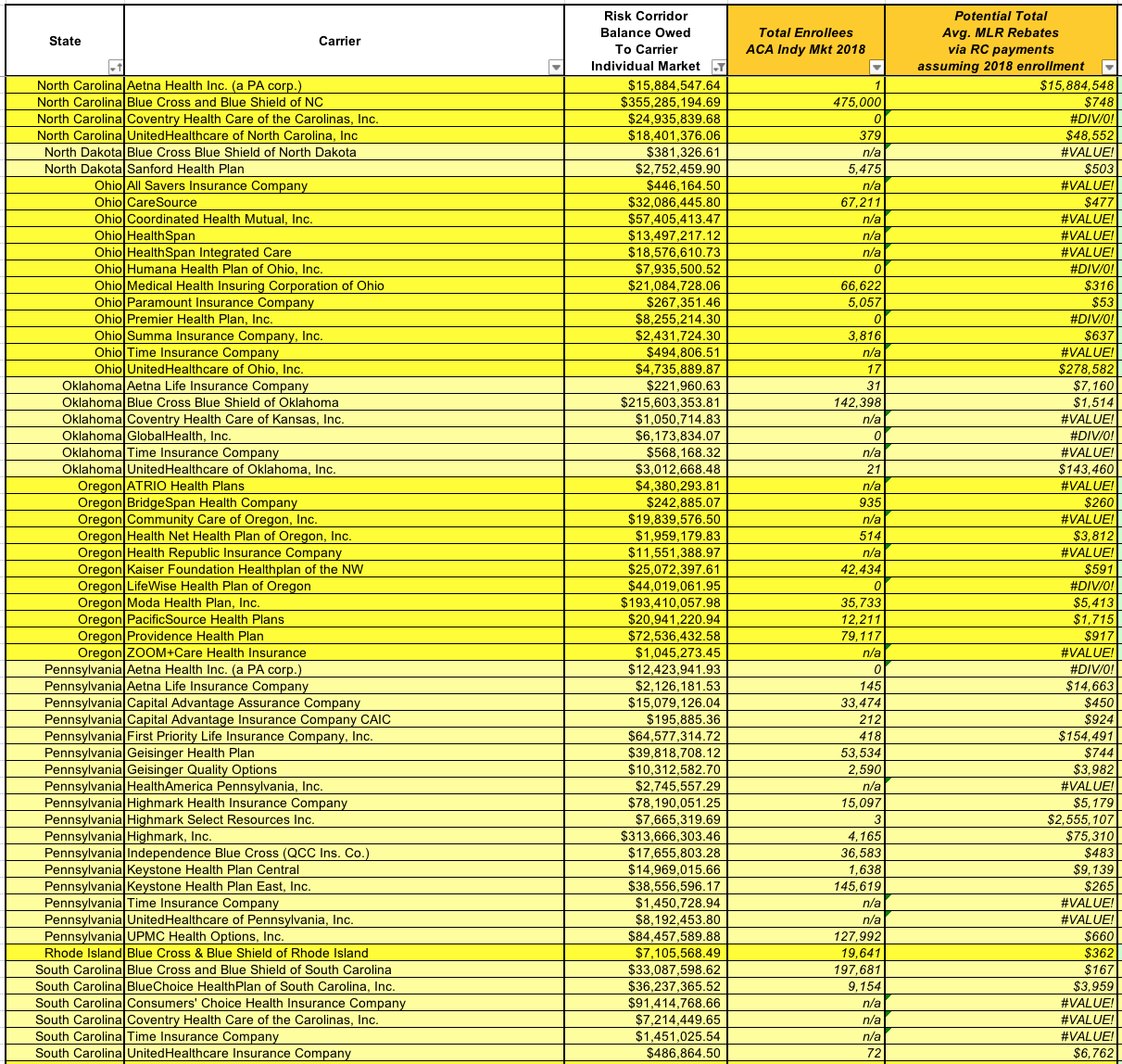 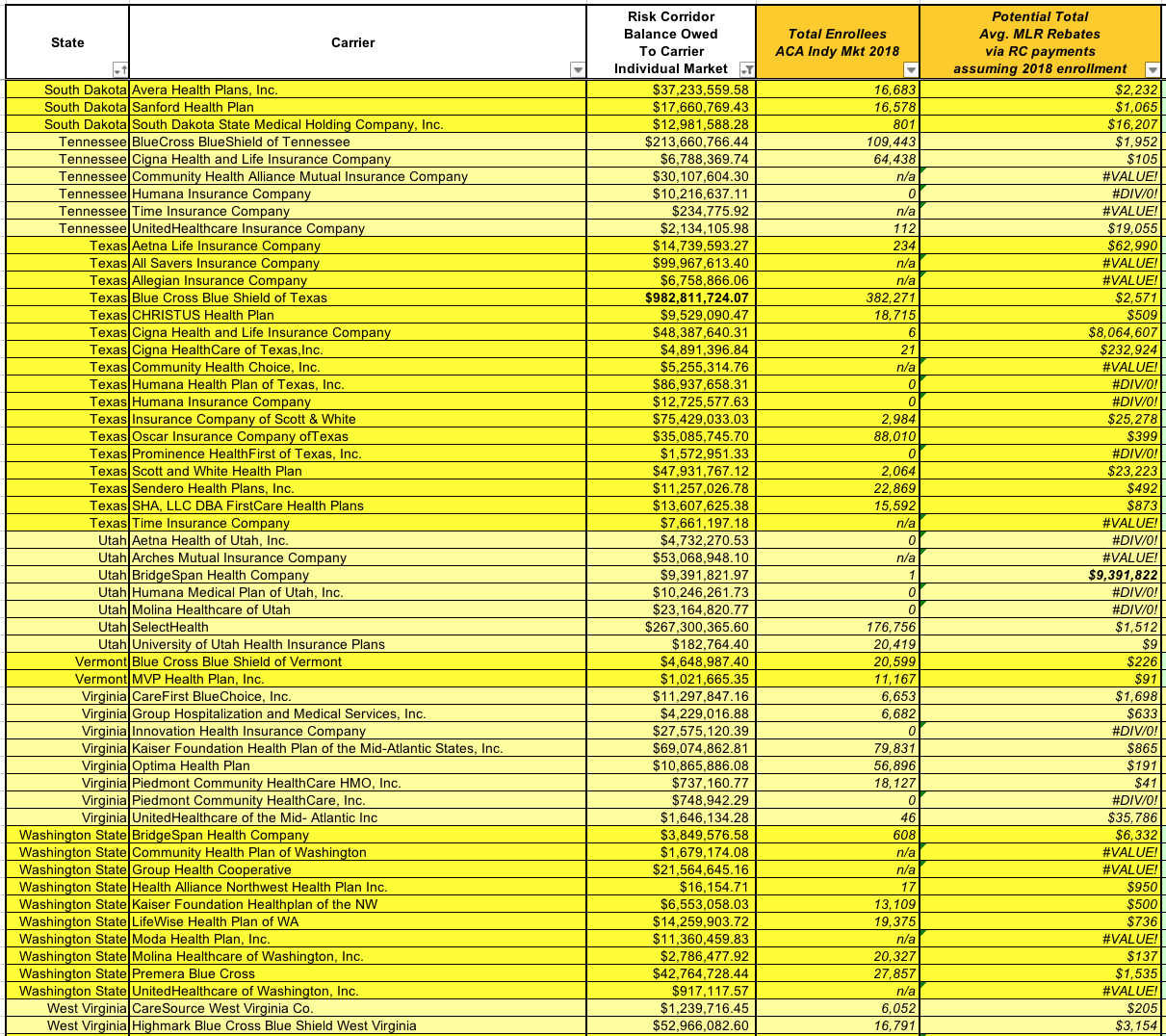 Whew! That's a lot of data.

Note that of the 345 total companies owed money, 56 of them had NO individual market enrollees in 2018, and another 77 aren't listed in the 2018 MLR filings at all. As I mentioned earlier, many of these are co-ops and other carriers which went out of business in 2015 or later, but others may have been bought out or merged at some point. Still others might still be around under a different name, I'd imagine, but I don't know which ones those are.

(At the opposite end of the spectrum, as I mentioned earlier, is CareFirst BlueChoice of DC, which is only owed $15,000...and they had 4,400 enrollees in 2018, which means that assuming a similar enrollment this year, each one would likely only receive $3....spread out over 3 years. Enjoy that $1/year, folks!)

As I noted above, I have no idea how the MLR rebates would be handled in the cases where there were no enrollees whatsoever...there'd be no one to even send the checks to. In cases of bankruptcy/liquidation, I presume it goes to the creditors. If the carrier was bought out, I assume it goes to whoever bought them out...which in turn could mean they would have to send out more MLR rebates to their policyholders.

But forget about all of that for now...look at the potential per-enrollee rebates which could potentially end up being paid out. In the list above, these range from as low as $619 apiece for BCBS of Alabama (not bad)...to as high as a jaw-dropping $75,311 apiece in the case of 4,100 Highmark enrollees in Pennsylvania! WOW!

BUT HERE'S THE TRUE SHOCKER.

The carriers above may be the ones owed the most money, but most of them had tens or hundreds of thousands of enrollees in 2018; assuming similar numbers in 2020, those vast quantities of cash would be divided up among them, making the per-person total tend to be in the low- to mid-four figures (Highmark of PA aside).

But what about a carrier which mostly dropped out of the individual market but not quite? I'm talking about carriers which are owed millions of dollars in Risk Corridor payments but only have a small number of actual individual market policyholders to divide it up amongst?

I'm about 99% sure that CMS will order the carriers not to record the Risk Corridor payments on a cash basis, and instead will require them to do so on an accrual basis. That would be a royal pain in the ass for them logistically, but it would also avoid absurd scenarios like one person in North Carolina receiving a a check for nearly $16 million.