Well, this news is either moderately interesting or jaw-droppingly awesome, depending on what the actual number is.

@charles_gaba The total number of individual enrollees in the Hawaii Health Connector is over 12,000. More info here: http://t.co/ertrxWh6n4

When you visit the link, it goes to a video interview with the executive director of the HI exchange, who states, when asked "do we know how many signups there've been so far?" that "it's about 12,000; we were at 250 this time last year, so we've made a lot of progress."

Now, hold the phone a minute. According to the Kaiser Family Foundation, Hawaii only has around 53,000 residents total who are even eligible to enroll via the ACA exchange to begin with.

Another 4,725 QHP determinations. Assuming 60% of those have selected plans already, that should bring the total to around 42,100 to date...or 33% higher than MA's total 2014 enrollment tally. 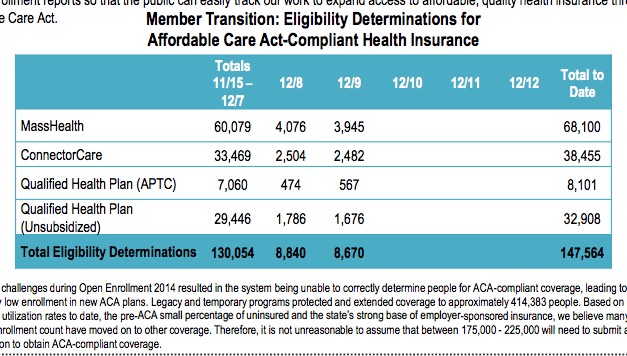 OK, this definitely makes me feel better about the confusing CoveredCA data release less than an hour ago, in which the data was so spotty it made figuring out how close I was next to impossible.

So, let's think about this. "Almost 1 million" suggests at least 900,000 people to me, and the "more" part makes it clear that he's referring to new enrollments, NOT renewals of existing ones.

The most recent official data point given was HHS's announcement of 765,135 plan selections as of 11/28 via HealthCare.Gov. They also announced that 48% of those were new enrollees, or around 367,000 people in the first 2 weeks of open enrollment.

Just moments ago, CoveredCA head Peter Lee held a conference call in which he issued the first full 2015 open enrollment period data (until now, the only number released was 11,357 QHPs in the first 4 days...except that only included new enrollees, not renewals).

As I noted yesterday, I estimated appx. 397K QHPs through Monday (12/08). I'm also guessing it'll be about a 55/45 split between renewals of existing enrollees & new additions.

Hmmm. Well, now...on the surface, this makes it look like I was way off, overestimating by a whopping 8-fold factor.

HOWEVER, there are two rather important (and unexpected) points which make that comparison impossible:

Meanwhile, they've also added an additional 10,017 people to Medicaid. They don't specify whether all of those are brand new (the vast majority of KY's Medicaid-eligible folks should already be enrolled by now) or if some of them are renewals by existing enrollees, however:

I don't know exactly how many individual people a "household" represents, but I've typically used a 1.8x multiplier to be very cautious (the Census Bureau uses 2.63x).

That suggests the actual number of PA expansion enrollees is more like 49,000 people in just the first week, which would be a fantastic start.

The Corbett administration reached an agreement with the federal government this year to launch the Healthy PA program in lieu expanding Medicaid. Open enrollment in the program has started and coverage will take effect Jan. 1.  However Governor-elect Tom Wolf says he will scrap Healthy PA and opt in to Medicaid expansion.

The impending switch apparently has confused many low-income Pennsylvanians, and some are sitting on the sidelines rather than signing up for coverage.

“The most important things is for people to enroll and to get their names on the list,” said State Rep. Vincent Hughes (D- Philadelphia).  “If they are not on the list then they won’t get the coverage."

Despite the confusion, more than 27,000 households applied for coverage in the first week of enrollment, which began Dec. 1.

I'm gonna take a stab at their number:

We'll see how close I come.

Again, I don't have the hard QHP selection numbers for the past 5 days, but assuming 60% of the QHP determinations have also selected a plan, the total should be roughly 39,300 as of last night. 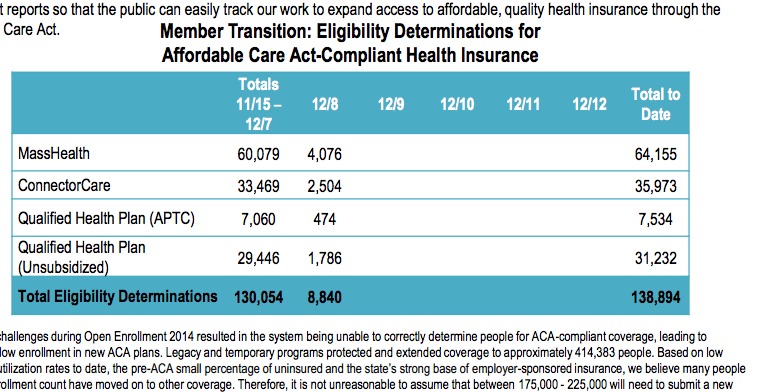 Massachusetts is now on track to enroll a minimum of 154,000 people...and that's not including the mid-December/mid-February surges which are sure to come.

One of the big media stories this morning ( a positive one for once, which has been all too rare of late) was President Obama filling in for Stephen Colbert's "The Word" segment (rebranded "The Decree" for one night only). In it, Obama made a hilariously self-depcrecating pitch to young people ("folks" as he loves to put it) to enroll in Obamacare, in the same vein as his "Between Two Ferns" segment last spring:

Yes, it's awesome; there were a few bits which literally made me laugh out loud. However, there was also one very important data point thrown in--and I guarantee you that it wasn't included lightly. Did you catch it? It comes in at exactly the 3:00 minute mark:

"Nearly 7 million people signed up last year, and almost 1 million more have signed up in just the past few weeks."

Pennsylvania is about to suffer from whiplash with their version of Medicaid expansion; outgoing GOP Governor Tom Corbett set it up as an Arkansas-style "private option" program, but incoming Democratic Governor Tom Wolf plans on switching everything back over to "standard" Medicaid expansion after he takes office, so things could get a bit confusing for awhile.

The good news, anyway, is that it's off to a great start:

Gillis said people have reached the call center, but calls were taking longer than expected, with some taking two hours or more.

Meanwhile, she said the online enrollment process is working well. She said the state received 11,500 applications during the first two days of enrollment. There is no enrollment deadline, but people who want coverage on the first day it's available, Jan. 1, must enroll by Dec. 15, Gillis said.

Note to 35* States Running off of HC.gov: My "Denny's Grand Slam" Solution is only TECHNICALLY easy, not LEGALLY so.

I'm filing this entry away in order to smack every damned one of these states--including the ones with Democratically-controlled governments--over the head with it 7 months from now when the Supreme Court is expected to rule on the King/Halbig case.

They're playing Russian Roulette with the lives--literally--of millions of people, sitting on their asses on the assumption that a) the SCOTUS will shoot down the King plaintiffs or b) if they do rule for the plaintiffs, they can slap something together with duct tape & chicken wire at that time.

Just a few things to note...

MASSACHUSETTS: The MA Health Connector allows for online premium payments (and in fact, payments have to be made to the exchange, not to the insurance company itself). The good news is that the website & billing system appear to be working properly this year, a vast improvement over last year's disaster. The bad news (or, odd news anyway) is that for some reason the system requires you to pay using only direct electronic fund transfers or a written check--it does not accept credit card payments!

I don't know if this is for technical reasons (which I doubt) or policy reasons (avoiding the 2.5% transaction fees or whatever), but it seems very odd to me.

HAWAII: Not only hasn't the HI Health Connector provided any enrollment updates since open enrollment started again on November 15th, they haven't even updated their enrollment report section since July 26th! Guys, either post an update or at least remove the link entirely; keeping it as is, locked in on 7/26 is just embarrassing.

Not an official press release, but the number is solid: 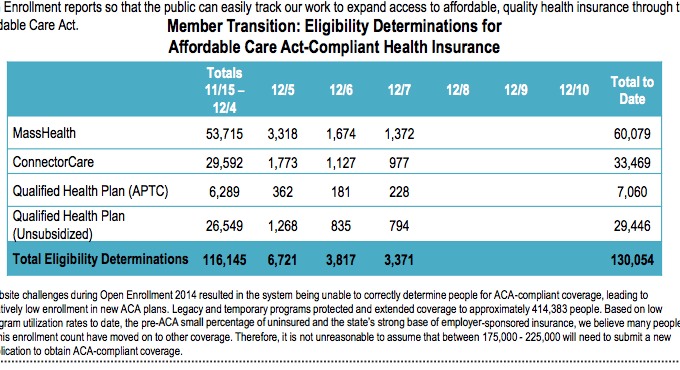 The December Surge Has Begun.

As I noted in my nightly newsletter last night:

I've projected that total QHP enrollments nationally hit around 1.57 million as of Friday (12/05) night (of which about 1.18 million should have been via HC.gov).

As of last night (Sunday the 7th), the totals should be roughly 1.74 million nationally (1.30 million HC.gov). Until now, enrollments nationally should have been averaging roughly 75-80K/day (except for a lull on Thanksgiving, of course).

As you can see on The Graph, however, I now expect things to start ramping up dramatically: Likely 200K/day for 9 days straight, hitting around 3.4 million manual enrollments via either renewals, re-enrollments or brand-new enrollments through the 14th.

Then, on December 15th, I'm expecting something like 3.5 million current enrollees to be auto-renewed all in one shot, plus another 200-300K manual enrollments that day alone, which should push the total well over the 7 million mark.