...Factually, the claim doesn't appear to be accurate. Kentucky had 26,271 more people working last month than it did in March 2010 when President Barack Obama signed the Affordable Care Act into law, according to the U.S. Bureau of Labor Statistics. The state's unemployment rate in that same period fell from 10.5 percent to 7.1 percent.

Manoj Shanker, an economist at the Kentucky Office of Employment and Training, said the health care law "is expected to be a net gain for the economy."

"It is definitely expected to create jobs, and not just for doctors and nurses," Shanker said.

...About 3,600 additional health care jobs were created over the last year in Kentucky as places such as Perry County...saw the percentages of their population without health insurance drop from as high as 20 percent to no more than 8 percent.

Still no Medicaid update since 8/13, but Oregon's total QHP figure is up another 687 since 9/22, while NET QHPs are down 696, giving an overall attrition rate since the peak in mid-July of around 2.3% per month. Note that the net current enrollment figure is still 14% higher than the last official HHS report tally of 68,308: 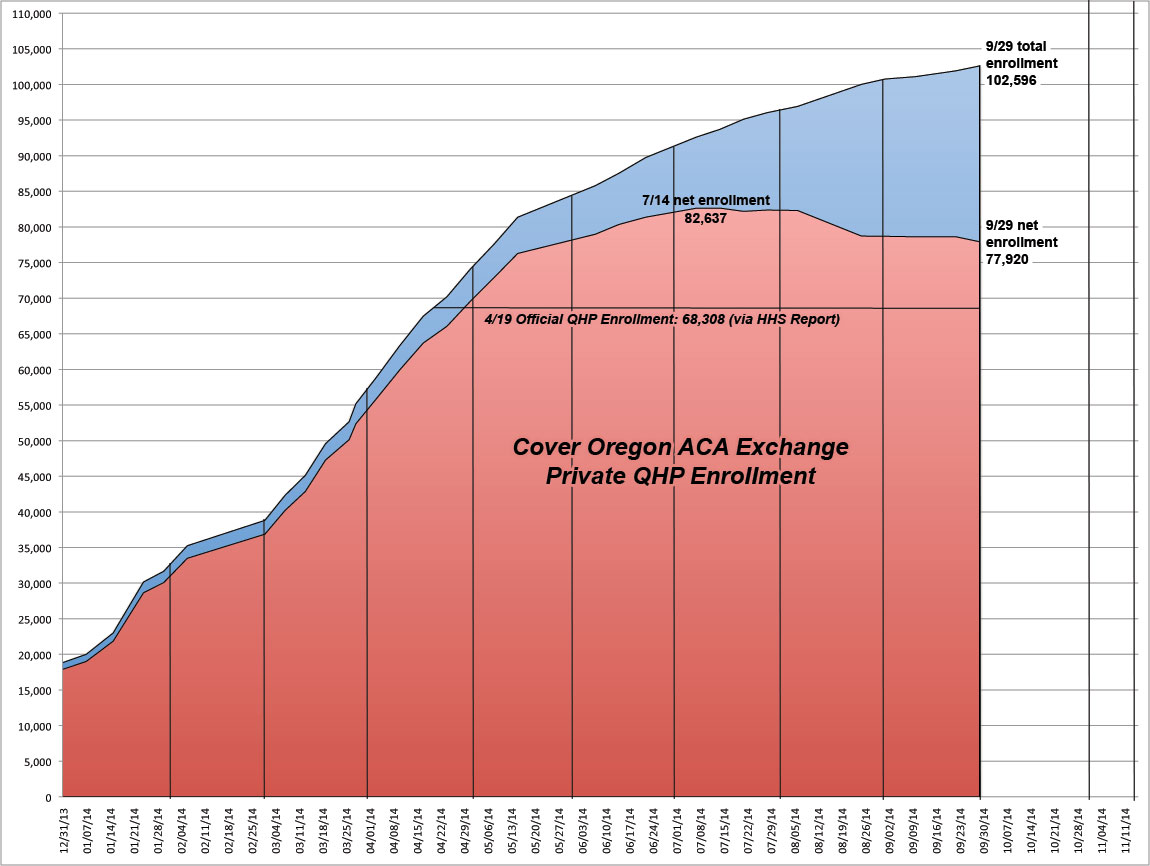 REMINDER: Today is the last day for 300,000 HC.gov enrollees to clear up income discrepancies!

I've already posted about this issue several times before, but I, like the Wall St. Journal, figured I should post a reminder since today's the deadline:

WASHINGTON—Hundreds of thousands of Americans face a Tuesday deadline to verify their income and are at risk of losing or having to pay back their federal health-insurance subsidies under the Affordable Care Act.

The need for people to pay back the government could become a headache during next year's tax season, when Americans are expected to pay back any subsidies they weren't eligible for.

The Obama administration has told more than 300,000 individuals who obtained coverage through the federal HealthCare.gov site that they may lose some or all of the subsidies if they don't provide additional income information that jibes with Internal Revenue Service data. That information includes tax returns, wages and tax statements, pay stubs and letters from employers.

This morning I introduced an all-new, cleaned-up version of The Graph which only includes commercial policy enrollments via the ACA (exchange QHPs, plus references to off-exchange QHPs, ACA-enabled ESIs and sub26er enrollees), projected out through Nov. 15th (when the whole process starts all over again).

Now I've added the other half of the revamped graph: ACA-enabled Medicaid/CHIP enrollments.  Like the QHP graph, there are 3 color-coded sections, but in this case they represent "Strict ACA Expansion" (people who are only eligible for Medicaid/CHIP due to the income provisions within the law in half the states); "Bulk Transfers" (ie, transferred from existing state-run programs such as LIHP in California, Commonwealth Care in Massachusetts, etc. due to ACA provisions) and "Woodworkers" (people who were already eligible for Medicaid prior to the expansion provisions, but who never enrolled before due to either being unaware of their eligibility, not understanding the process, etc). "Woodworkers" are folks who have been "drawn out of the woodwork" since last October thanks to a robust outreach program by the government and affiliated nonprofits, as well as a streamlined enrollment process and other measures.

Minnesota: Total enrollments up 6,585 in past week

QHPs are up another 183, Medicaid 5,242 and MinnesotaCare (which is a little bit like high-end Medicaid, from what I can tell) is up another 1,160 over the past 7 days: 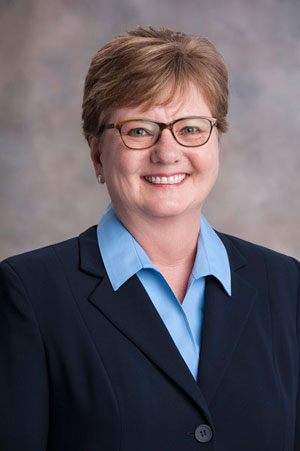 Louise Norris of HealthInsurance.org has posted a couple of fantastic articles the past week or so. First up is an explanation of why most current healthcare policies weren't cancelled...which is to say, the insurance companies cancelled most of them for different reasons than what ACA critics are claiming:

But AV is just one of numerous factors involved in compliance with the ACA. There were many other reasons that existing plans were not compatible with the law. Of particular importance, less than 2 percent of the individual health plans in existence in early 2013 provided coverage for all ten of the ACA’s mandatory essential health benefits.

...So when policies are being cancelled and replaced with ACA-compliant coverage, AV isn’t likely to be the primary culprit. Virtually no individual policies that were in effect prior to 2014 are compliant with the ACA, for a host of reasons other than AV.

ACA-compliant plans will be cancelled? Wrong.

OK, I feel a bit silly posting this several days after HHS Sec. Burwell stated it officially, and it may seem especially anticlimactic given that I had already posted similar numbers from not one, not two, not three, not four, but five different respected national health insurance coverage surveys a couple of months ago (RAND Corp, Gallup, Urban Institute, Commonwealth Fund and the New England Journal of Medicine, to be precise), but it still seems like a good idea to lock this down for the record:

Taking questions yesterday from reporters for the first time at a White House news conference, HHS Secretary Sylvia Mathews Burwell said insurance programs created by the Patient Protection and Affordable Care Act have reduced the nation’s uninsured population by 26 percent. She called the reduction “the most important number” to measure the law’s success.

Not The Onion: Forced-birthers getting the vapors over abortion costing 1 penny too little.

A couple of weeks ago, a GAO report concluded that a dozen or so insurance companies, along with the Washington State ACA exchange, weren't fully complying with the "no federal funding of abortion" provision within the Affordable Care Act:

The new GAO study shows that, instead, taxpayers are subsidizing abortions. Customers in five states have no abortion-free plans available to them, and in many states, customers can't tell which plans cover abortion and which don't.

...Fifteen issuers and the Washington Health Benefit Exchange ... did not itemize the premium amount associated with non-excepted abortion services coverage on enrollees’ bills nor indicate that they send a separate bill for that premium amount.

Minnesota: PreferredOne had to pull out due to bad decisions on company's part, not the MNsure exchange

One of last week's big ACA stories was the news that the largest insurance company on Minnesota's exchange, PreferredOne, was dropping out of MNsure.

ACA critics pounced all over this news as Yet More Proof That Obamacare Is Failing®, even though pretty much every "proof" they've presented to date has turned out to be nonsense or, at best, vastly exaggerated (never mind, either, the fact that overall, 77 new insurers are joining the ACA exchanges while only 15 are dropping out, for a net gain of 62 companies nationally).

Michigan: ACA Medicaid expansion up to 400K (84% of total eligible)

...but there's an even more recent figure given today, as GOP Governor Rick Snyder tries to take credit for the program (note that the article doesn't mention "Obamacare" or "the Affordable Care Act" anywhere in it):

LANSING, Mich. (AP) — Just over 400,000 low-income adults in Michigan have signed up for Healthy Michigan, the state’s Medicaid expansion program.

In addition, the original estimate of the maximum eligible number of MI residents was apparently a bit high (500K); evidently the actual number is slightly lower...meaning that the percentage reached is even better by comparison:

A couple of weeks ago, I reported that Maryland, which was one of the states which had embarrassingly bad technical problems with their ACA exchange--and which ended up scrapping their platform completely and moving to an all-new system based on Connecticut's excellent platform--was making some very wise decisions for 2015 based on lessons hard-learned from 2014: