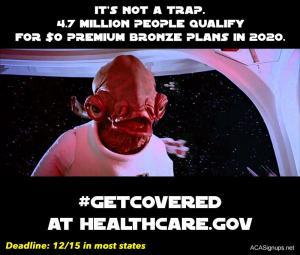 For three years running, thanks to a combination of the way the ACA's premiums subsidy formula works and the Silver Loading workaround, several million low-income people are eligible for fully ACA-compliant healthcare policies which end up costing them NOTHING in premiums after federal tax credits are applied.

If you earn less than 200% FPL (just under $25,000), you also qualify for heavy cost sharing reduction assistance as well...but only if you enroll in a Silver plan.

A Platinum plan would then cost $435/mo and thus would be a nonstarter. A Gold plan would cost $285/mo; this would still likely be impractical for the enrollee at their income level. A Bronze plan, on the other hand, would only cost $15/month!

In fact, if you earn less than 200% FPL, you'd qualify for even higher subsidies, thus driving the net premium for a Bronze plan down to $0 (no, your actual premium will never go negative even if the formula says it should...you're not going to get paid for enrolling in a Bronze plan).

Now, for the vast majority of people earning under 200% FPL, the Silver plan would still be the better value, because Bronze plans don't include CSR assistance and thus you'd be stuck with a $6,000 deductible, whereas if they got the Silver plan, the deductible might only be a few hundred dollars.

However, even Bronze plans still include the ACA's long list of free preventative services the deductible doesn't apply to (annual checkups, blood screenings, mammograms, etc.) and they still include the ACA's cap on maximum out of pocket expenses for in-network care, so if you don't have to pay a dime in premiums, it's still a hell of a lot better than not having any coverage at all.

As for those earning between 200 - 400% FPL, normally the "Free Bronze!" wouldn't apply...but due to the quirk of how Silver Loading has warped ACA premium pricing the past few years, there are a lot of people who qualify for free (or at least dirt-cheap) Bronze plans in this range as well. Since these folks don't qualify for CSR assistance, there's less incentive for them to go for Silver instead of Bronze, although it's still a trade-off to consider.

Each year, the Kaiser Family Foundation runs an analysis across the country to see just how many people are eligible for zero-premium Bronze plans. In 2018 they estimated it to be around 4.5 million nationally. In 2019 they pegged it at 4.2 million.

While the percent of the population without health coverage has decreased since the major coverage expansion in the ACA, at least 10% of the non-elderly population is still uninsured. This analysis looks at how many of the remaining uninsured are eligible for premium subsidies large enough to cover the entire cost of a bronze plan, which is the minimum level of coverage available on the Marketplaces.

...In this analysis, we focus specifically on the approximately 16.7 million uninsured people who could be shopping on the Marketplace, regardless of whether or not they are eligible for a subsidy.

...We estimate that 28% of uninsured individuals who could shop on the Marketplace, or 4.7 million people nationwide, are eligible to purchase a bronze plan with $0 premiums after subsidies in 2020.

...As shown on the map and table below, the availability of free bronze plans varies widely between states. More than half of the uninsured who could get a free bronze plan live in Texas, Florida, North Carolina, or Georgia. Other states with large shares of uninsured residents who could sign up for a no-premium bronze plan include Iowa (59%), Alaska (45%), Wyoming (44%), Idaho (41%), and South Dakota (41%).

Kaiser's analysis includes a handy interactive map and a state-by-state breakout of how many uninsured residents likely qualify for zero-premium Bronze plans.

It's important to note that this only includes those who are currently uninsured. Presumably a few million of those who are already covered by ACA policies qualify as well (some of whom are already enrolled in a $0 premium Bronze).

You still have five days. GET COVERED!