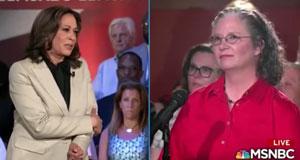 As I've written about many times, the elimination of private health insurance is not only baked into the current "Medicare for All" bills on the table in both the House and Senate, it's actually one of the major selling points. Harris (and some other MFA supporters) have tried to hedge on this by pointing out that MFA would still allow for "supplemental" insurance, but (again, as I've pointed out many times before) this is disingenous since MFA also purports to cover so many additional services that there's very little left for "supplemental insurance" to cover.

This, by the way, is why I'm emphasizing "primary" above...when people talk about "losing their current coverage" they aren't generally talking about MediGap (if you're on Medicare) or standalone dental or vision plans...they're talking about their primary, major medical insurance.

However, in two recent appearances, Harris seems to finally have found her footing...sort of. About two weeks ago, when asked about it, she noted something new:

TAPPER: There are a lot of members of unions, for example, who like their private insurance...

TAPPER: ... and the plans that have been negotiated on their behalf and don't want that replaced.

HARRIS: Right. Well, listen, let me just tell you something. I completely agree with those members of organized labor who have negotiated for plans and have, in those negotiation processes -- processes, often give enough what could have been higher wages in exchange for a higher coverage for health care...and we have got to -- we have to address that. It's a legitimate concern which must be addressed.

Then, last night, Harris pretty much reiterated the "union healthcare plan" response (starting at around 27 minutes in; this is my own quick transcript, so I'm slightly paraphrasing):

LAWRENCE: "There are now a few different versions of Medicare for All that people are talking about; it won't be exclusively up to the President. Congress, if it does, will deliver some version of Medicare for All to the President. Let's rattle off a few of these...which ones would you sign? Would you buy a version which makes Medicare an option for people under 65 to buy into?

HARRIS: "My preference is Medicare for All...(mandatory) for everyone...but I am also supporting currently...

LAWRENCE: "...so that does mean giving up their current, private healthcare plans?"

HARRIS: "No, but they'd be entitled to receive and have supplemental insurance...but under Medicare for All...my vision for it...we would expand the coverage of Medicare so it'd include dental, vision, hearing aids..."

LAWRENCE: "But before you get to expanding coverage, the version which you support is the way Medicare currently works for people 65 and older, which means it might be what they depend on and it's the only thing they have, or if their union has a retirement plan that works as a supplemental they can have that private supplemental plan on top of Medicare."

HARRIS: "They can have the supplemental plan on top of...but the idea and the goal is that everyone is gonna be in the same system. We still do need to deal, though, with the fact that we've got plenty of men and women who work in unions who have given up extra pay to get more benefits under their healthcare plans, and that's a real issue that I'm aware of and want to be able to reconcile. Because they shouldn't have to pay the price of having given up some of their salary to get greater benefits, and then we shift to a Medicare for All system."

LAWRENCE: "So would you then veto a Medicare for All bill that doesn't include that option? A bill that makes it mandatory for everyone, and there is no private insurance system in place?"

HARRIS: "I would not support something that did not take care of the men and women of organized labor who have negotiated those plans, and deserve the benefit of the plan that they've negotiated."

Unfortunately, Lawrence did not get around to "rattling off a few" of the plans on the table...because if he had done so, he presumably would have listed:

It's both heartening and incredibly frustrating for me to see this, because Harris is this close to endorsing my preferred plan (Medicare for America), which would accomplish pretty much exactly what she's talking about:

I really wish Harris would just come out and endorse Medicare for America, as Beto O'Rourke has already done. At least three other Presidential candidates (Pete Buttigieg, Kirsten Gillibrand and Elizabeth Warren) are also in the same boat--their rhetoric makes it sound an awful lot like they're pushing for Medicare for America without coming right out and saying it--but for some reason Harris is the only one for whom the issue has become a major recurring theme in TV appearances so far.

I'm not sure why it's so difficult for any of them to simply put it this way:

"The individual market was a mess before the ACA and still has a lot of problems today, so it'd be mandatory for that population. The employer market still has problems but is a lot more stable, so it'd be optional for them. Boom."

OK, perhaps they could leave out the "boom". 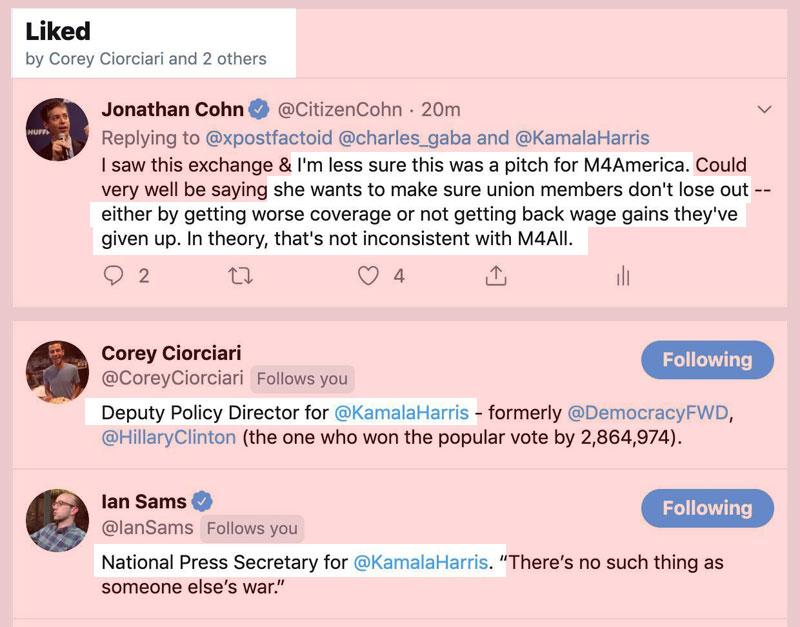