BREAKING: CMS causes thousands of actuaries to get ulcers & heartburn for nothing. 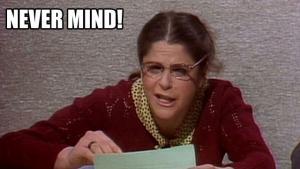 Less than three weeks ago, the Centers for Medicare & Medicaid (CMS) dropped a Friday night bombshell: In response to a judicial ruling in a federal lawsuit brought by a small New Mexico insurance carrier, CMS had decided to temporarily "freeze" the transfer of roughly $10.4 billion in Risk Adjustment funds either owed to or owed by several hundred carriers nationwide.

The whole story about how the Risk Adjustment (RA) program, what the lawsuit is about and why the funds were frozen gets pretty wonky, but the bottom line is...

Hans Leida of Milliman, the global actuarial firm based in Minneapolis, echoed these concerns. He told HuffPost that a long suspension in payments “could be catastrophic for an insurer that is in a weak financial position and needs the cash. Maybe it’s just a delay of [payments] that will eventually happen, and as an insurer in theory you know you will come out whole, but that assumes you have enough money to keep operating.”

It's my understanding that the risk adjustment issue has been resolved for 2019 and beyond, and theoretically shouldn't impact 2019 premium rates, but...

Shorter delays could be consequential as well, Leida said, because industry officials are already negotiating with state regulators over next year’s rates. Insurers aren’t supposed to adjust premiums in the future to adjust for past gains or losses, but they use past risk adjustment payments as a way to calibrate projections of who they will enroll next year.

In other words, if the freeze had dragged out past the final deadline for 2019 ACA exchange participation, a lot of carriers might have either pulled out of the market or at the very least jacked up their premiums accordingly. As Leida notes above, they're not allowed to do that to make up for prior year losses...but at least one carrier in Tennessee has already baked in an extra 7% or so to ward off any additional RA losses for 2019 and beyond:

Again, if the RA issue dragged out, I was expecting a lot more carriers to follow in BCBSTN's footsteps...and it was all utterly unnecessary, because...

...Administrations don’t typically concede so much, so soon in the face of district court decisions, [U of M law professor Nicholas] Bagley said. “Otherwise, a lone judge could throw an entire agency’s work into disarray,” he added.

He noted that the administration has multiple options at its disposal, like interpreting the court decision narrowly, so that it only affects New Mexico. It could also write a so-called interim rule that would allow payments to proceed.

“They’re asking the court to reconsider, which is something,” Bagley said. “But there are lots of ways to limit the scope in the meantime and they’ve chosen to do none of them. ... Normally, you would work a lot harder, as the federal government, to keep your program going.”

Well, the good news is that apparently Trump's CMS Administrator, Seema Verma, has reversed course and decided to resolve the RA issue fairly quickly after all:

Today, the Centers for Medicare and Medicaid Services (CMS) posted a final rule that reissues, with additional explanation, the risk adjustment methodology that CMS previously established for transfers related to the 2017 benefit year. This important step fills a void created by a federal district court’s vacating of the previously issued methodology, and enables the agency to resume the CMS-operated risk adjustment program in the individual and small group markets.

...A hearing on the motion for reconsideration was held on June 21, 2018 in which the judge suggested a final ruling may not come until Labor Day. Following that hearing, it was clear that the case would not be resolved through the normal process in time to for the agency to make scheduled risk adjustment payments and collections in August.

This circumstance provided good cause for CMS to issue a final rule that dispenses with the typical notice and comment period. This final rule provides a fuller explanation supporting the 2017 risk adjustment methodology, consistent with the judge’s request, and allows us to resume the risk adjustment program without delay.

Furthermore, today’s final rule announces the agency’s intention to issue a Notice of Proposed Rulemaking (NPRM) to propose and solicit comment on the CMS risk adjustment methodology that will apply to the 2018 benefit year, which was also vacated by the court. In the draft 2019 Payment Notice, we sought comment on our proposal to use the statewide average premium in the CMS risk adjustment methodology for the 2019 benefit year and beyond. We finalized that approach as proposed in the final 2019 Payment Notice published on April 17, 2018.

OK, so...good. This should mean that the entire #RiskAdjustmentFreeze panic attack which freaked out insurance companies, actuaries and healthcare wonks a few weeks ago turned out to be a lot of ulcers, heartburn and headaches over nothing.

In any event, this is a rare good thing which has happened. Presumably insurance carriers will proceed the same way they were planning on doing before the RA freeze announcement, "only" having to take into consideration the Individual Mandate being repealed, #ShortAssPlans being expanded, and the existential threat of the ACA's Guaranteed Issue and Community Rating provisions being stricken. So, you know...that's something.

Meanwhile, the only material impact I can think of is that Blue Cross Blue Shield of Tennessee will now presumably resubmit a revised filing for next year, removing the extra RA cushion. If so, that should mean that 2019 rates in Tennessee will drop around 9.4% overall instead of 5.7% (and rates would have dropped by as much as 21% without the mandate repeal and #ShortAssPlan expansions).