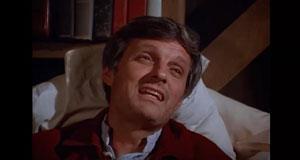 Note: Much of this entry is a repeat of yesterday's, but I felt it was worth a separate entry.

This metaphor will take a bit, but bear with me.

On March 16, 1981, CBS aired the 17th episode of Season 9 of M*A*S*H. For those of you too young to remember, M*A*S*H, set at a U.S. Army medical camp in Korea during the Korean War, was one of the most successful TV shows in history, running 11 seasons. I believe the series finale remains the most highly-viewed broadcast in history. While M*A*S*H started out primarily as a sitcom, it evolved over the years into more of a drama with comedic moments.

Anyway, in S9 Ep17, "Bless You, Hawkeye", the main character, Dr. Benjamin Franklin "Hawkeye" Pierce (played by Alan Alda) finds himself stricken with a sudden, unexplained and violent allergic reaction to something. He spends much of the episode trying standard medical solutions, but his fits of sneezing and coughing become so bad that eventually a recurring character, psychiatrist Dr. Sydney Freedman, is brought in to see if there might be a psychological cause.

Freedman asks Hawkeye about his childhood, and Hawkeye, among other things, mentions his cousin Billy.

If you're unable to watch the video clip above, the transcript doesn't do the scene justice, but the gist of it is that one time, when they were kids, Hawkeye and Billy went fishing in a boat at a local pond. Hawkeye fell in the water, nearly drowned but was then rescued by his cousin Billy.

Freedman pushes Hawkeye hard on the details of this story, and eventually Hawkeye has a revelation, as a long-suppressed memory boils up to the surface:

Sydney: But how did you get into the water?

Hawkeye: I-I stood up. And he was kidding around. He pushed me! [Sobbing] Why did he do that? I loved him! I loved him! ...I hated him! Why did he push me? [Breathing Heavily] I got I got back in the boat.

He said to me "You're so clumsy. If it wasn't for me, you'd be dead." And I thanked him. He pushed me in the water and I hated him so much for that. And all I could do was thank him.

Sydney: Why couldn't you say you hated him?

Hawkeye: I couldn't. I couldn't even think it. I loved him.

Sydney: So you altered the event. He didn't push you in. He only pulled you out. And with that little piece of reality safely tucked away so was your conflict.

Hawkeye: Until the day before yesterday.

It turns out that Hawkeye's allergic reaction is psychosomatic, triggered by the arrival of a wounded soldier two days earlier who had fallen into a ditch of moldy water.

Obviously the Democrats don't love the GOP, so why am I telling you about this scene?

Because yesterday, Trump's CMS Administrator Seema Verma did pretty much the same thing.

Bravo to New Jerseyans, who will see their premiums in the individual market drop by about 15% from the expected premiums because @NJGov took action to address the failures of Obamacare. Today, @CMSgov approved NJ’s 1332 State Innovation Waiver. https://t.co/xvX4kcVZLW

Furthermore, the "1332 State Innovation Waiver" system is itself part of the Affordable Care Act. One of the best parts of the ACA is that it includes a framework for states to come up with improvements over it.

In other words, New Jersey Democrats are responsible for nearly every part of the 21.8 point relative rate reduction...all of which was either already part of the ACA or was specifically allowed for by it.

In fact, the only thing that Verma has any right to pat herself on the back for is pretty much scribbling her name down on the approval paperwork.

This is the same Seema Verma, mind you, who was caught openly attempting to extort insurance carriers into supporting repeal of the ACA last year.

The same Seema Verma who gave serious consideration to banning Silver Loading (the clever workaround carriers came up with to mitigate the damage caused by Trump's cutting off CSR reimbursement payments last year)...before doing a total 180 and deciding to actively promote Silver Loading.

The same Seema Verma who threw the entire industry into a panic last month by unnecessarily "freezing" Risk Adjustment fund transfers...before turning around and "resolving" the problem a few weeks later.

The classic definition of "chutzpah" is "a child who murders his parents, then begs for mercy because he's an orphan". In the future, this definition should just be replaced with a picture of Seema Verma's face.

UPDATE: For those who thought I was too tough on Verma seeing how she did approve the reinsurance waiver, consider this. 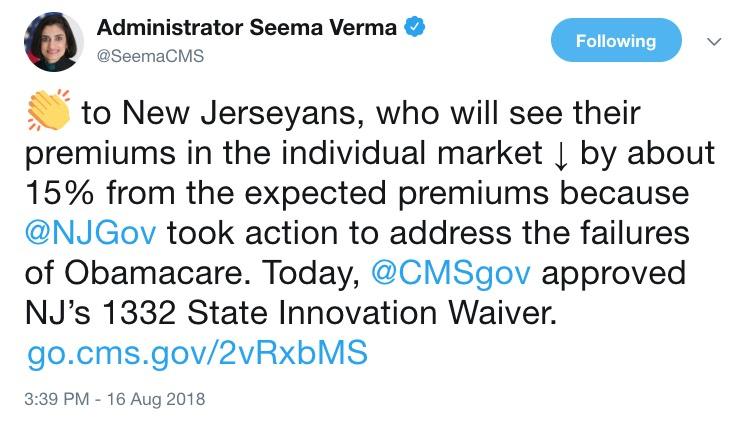 Here's her tweet from just 18 hour later in which she trashes the ACA's individual mandate: