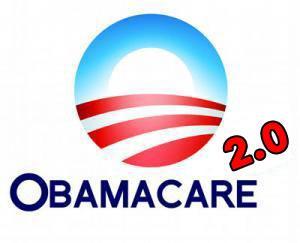 Anyone who reads my site, listens to my presentations or watches my videos should already know this, but the path for 2018 and 2020 on healthcare for Democrats is clear:

Since #USEAHIA is an absurdly stupid acronym/hashtag, I'm terming this bill ACA 2.0 instead.

Before anyone says it: Yes, I realize this would probably be vetoed by Donald Trump; unless some miracle happens and we're blessed with President Pelosi, the odds are 99.9% that we're gonna be dealing with a President Trump or President Pence through January 20, 2021.

However, unlike a total overhaul bill, there's a small chance that Trump might sign such a bill if it's bundled as part of a "must-pass" omnibus/budget bill, the way he signed the 6-year (later 10-year) CHIP extension recently. Stranger things have happened.

If it becomes law, it will stabilize and strengthen the ACA for several years, tiding things over until...

There's been some more developments since then. First of all, the Senate Democrats came out with their own "ACA 2.0" bill (officially called the "Consumer Health Insurance Protection Act" or "CHIPA"), which overlaps about 80% with the House version and actually includes more items on my wish list, so I'll slightly modify my recommendation above (I'd actually prefer a merged version of the two). 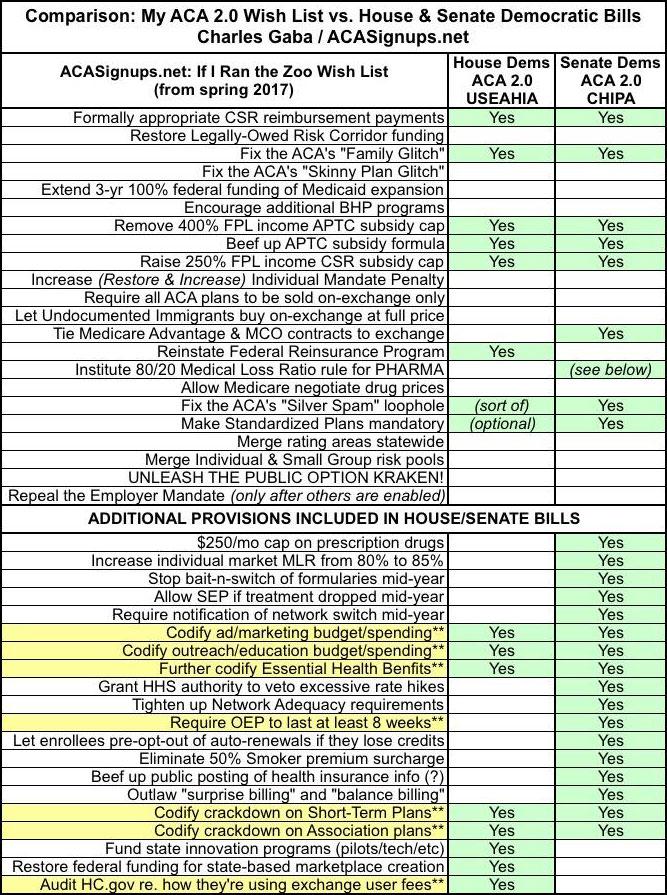 Then, the Kaiser Family Foundation issued a study which found that 59% of the country is now at least mildly supportive of a universal "Medicare for All"-like single payer healthcare system...but also found that a whopping 75% support something similar to the "Medicare Extra for All" universal coverage system proposed by the Center for American Progress. As a refresher, the most obvious differences between the two is that the M4A proposal would be mandatory for everyone within a 4-year timeframe, while the MEFA proposal would gradually become mandatory for about half the country over a 6-8 year period, with the other half (i.e., those covered by employer insurance) having the option of moving to it of their own volition.

Last week, Democratic Senators Merkley and Murphy introduced their "Medicare Part E" plan (aka "Choose Medicare"), which would fall sort of halfway between "ACA 2.0" and "MEFA" in my view...although not really, since Part E would still leave major holes such as the Medicare Gap. Their proposal joins some other major ideas such as "Medicare X" from Sen. Kaine & Bennet and the "Medicaid Buy-in" proposal from Sen. Schatz.

Then, a couple of days ago, there was another special Congressional election in Arizona, where emergency room doctor Hiral Tipirneni came within 5% of defeating Republican former state Senator Debbie Lesko for an open seat. On the one hand, Tipirneni lost...but this was in a deep red district where Donald Trump won by over 20 points in 2016. And just like the Pennsylvania race, healthcare was a huge factor which heavily helped out the Democratic candidate: 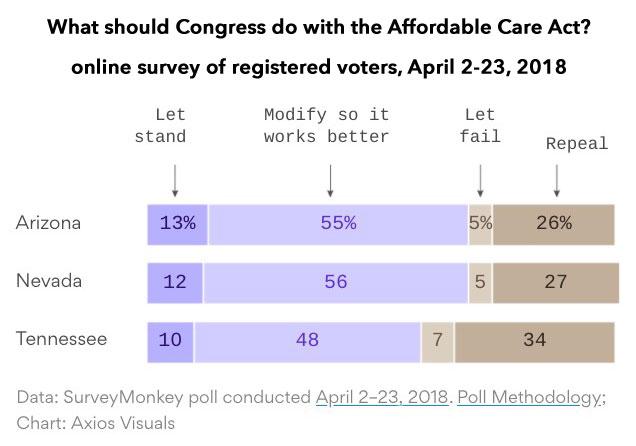 More than half of voters in Arizona, Nevada and Tennessee want Congress to modify the Affordable Care Act, while less than a third want it to be completely repealed and only 6% think Congress should “let it fail.”

Why it matters: Arizona and Nevada are seen as the states where Democrats have the best chance in November to take Senate seats currently held by Republicans, and Tennessee is working its way up the list. One of Democrats' most unifying and effective messages this cycle is health care, and they'll be sure to campaign hard against the GOP's repeal effort in these states.

Granted, "modify so it works better" can mean different things to different people, but seeing how everything the GOP keeps trying to do involves making the ACA crappier, I'm pretty confident that's not what most people have in mind. Combine that with the 10-13% who think the law should be left as is (I have to imagine those folks are the ones who aren't impacted by the real problems with the law today) and that's anywhere between 58 - 68% of voters who support improving the ACA...and the low end of that range belongs to deep red Tennessee.

OK, so why not simply push MEFA/M4A this year instead of waiting for 2020? Two reasons: First, because while the odds of Trump (or Pence, if it comes to it) signing ACA 2.0 are extremely slim, the odds of him signing MEFA/M4A are literally nonexistent; I'd rather go for something with a 1% shot than 0%. Second, because either M4A or MEFA would, by design, take anywhere from 4-8 years to ramp up fully, whereas the ACA as it stands is in desperate need of significant beefing up immediately. We'll need an improved ACA for 2019 - 2021 at the very least, and more likely for 2019 - 2023 or so. For anyone who doubts me on this, consider that even Bernie Sanders himself has signed on as a co-sponsor of Elizabeth Warren's ACA 2.0 proposal.

In any event, it's crystal clear that healthcare is among the major campaign issues that the Dems should be moving to offense on this year...while simultaneously defending it from further sabotage by Donald Trump's HHS Department.