COME ON DOWN TO CRAZY EDDIE'S HEALTHCARE BLOWOUT WHERE OUR PRICES ARE *INSAAAAAAANE*!!! 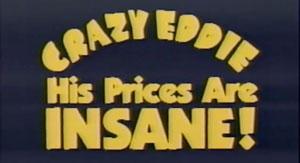 I've written a LOT about Silver Loading, the Silver Switcharoo and the bizzare policy pricing many people will find on the ACA exchanges this year due to two actions:

The gist of Silver Loading/Silver Switcharoo is that across roughly 40 states, subsidized enrolles may find themselves eligible for dirt-cheap (or even zero-premium) Bronze plans...as well as bargain-priced Gold plans which may cost the same or even less than Silver plans.

Meanwhile, unsubsidized enrollees could find their prices shooting through the roof, with Silver premiums going up as much as 50% or more...but in roughly 20 states, they can lop that down to as little as a ~10% or so rate hike by deliberately shifting to a near-identical policy off-exchange.

It turns out that not only are there a lot of people who qualify for Gold plans which run less than Silver, there's even a few folks who qualify for a Gold policy which costs nothing whatsoever (in premiums, anyway).

Are there any studies/stories out there about the prevalence of zero-dollar gold plans in the ACA marketplace?

I’ve seen research on zero-dollar bronze plans — but curious about the golds! Saw some out in the wild reporting last week.

I think they exist in a few places for the csr-eligible crowd. But those people presumably better off buying silver.

Sometimes it takes reading a tweet like that ^^^ to remember how bananas this year's situation really is.

See our analysis (second graphic). Free gold is very rare. But some more frequent availability for $10/mo or less.https://t.co/DfvpZ3xutr

Come on down today and we'll even throw in a free set of Ginsu® Steak Knives!*