ANOTHER reason why EVERYONE needs to CHECK FOR TAX CREDITS and SHOP AROUND, dammit! 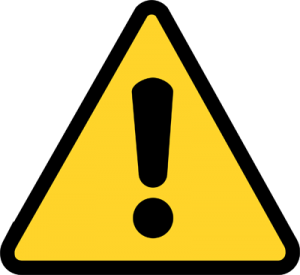 Over the past week or so I've seen or been sent several screen shots along these lines: 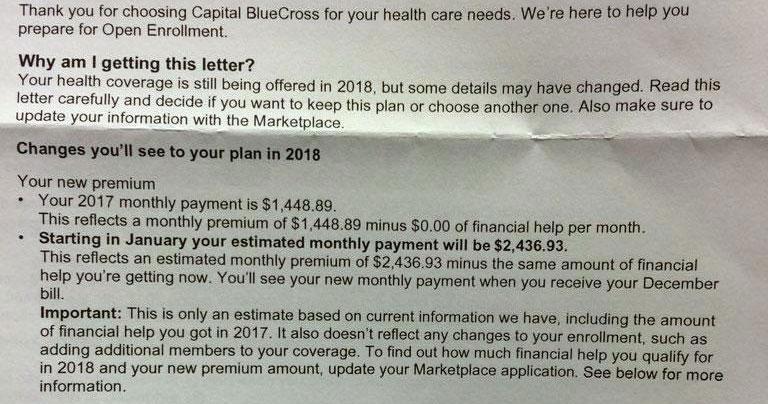 If you click on the image to see the full-size version, the key part is this:

Now, don't get me wrong: In the example above, Mr. Gallagher appears to earn over 400% of the Federal Poverty Line, and therefore didn't qualify for any financial assistance this year. I'm going to assume that he expects his income in 2018 to also be well over 400% FPL, so yeah, he has a right to be pissed (although he also appears to live in Lehigh Valley, Pennsylvania, which is an active Silver Switcharoo state, so assuming he's on a Silver plan today, if he were to shop around off-exchange he should be able to find a nearly-identical Silver plan for only around 8% more instead of a whopping 68% more:

Acting Commissioner Altman strongly encouraged individuals who do not qualify for premium subsidies to consider off-exchange options. The department worked with each of Pennsylvania’s five marketplace health insurers to ensure they would offer an off-exchange only option that is not impacted by the disproportionate rate increases for on-exchange silver plans. Off-exchange plans must be purchased directly through one of Pennsylvania’s five marketplace insurers or through an agent or broker licensed by the department to sell on behalf of these companies.

...The Pennsylvania Insurance Department is partnering with Consumers’ Checkbook again this year to create a shopping tool that allows consumers to compare both on-exchange and off-exchange plans available in Pennsylvania. Consumers can enter their income to see what subsidies may be available to them and estimate the monthly premium and total annual cost of plans in their area. If consumers find a plan they would like to buy, the plan comparison tool will take them to either Healthcare.gov or the company’s website to make a purchase. Consumers can visit https://pa.checkbookhealth.org to use the plan comparison tool.

UPDATE: OK, I don't know Mr. Gallagher's actual family specs, of course, but I tried using the PA.CheckBookHealth.Org site to plug in a family of 4 with both adults age 35 and both kids age 12 living in Lehigh Valley, PA and came up with the following, which seems reasonably close to the unsubsidized cost he's paying now. The only visible difference I can see is that the off-exchange version also has a $100 lower deductible, so in this case it would save the family a total of $7,200: 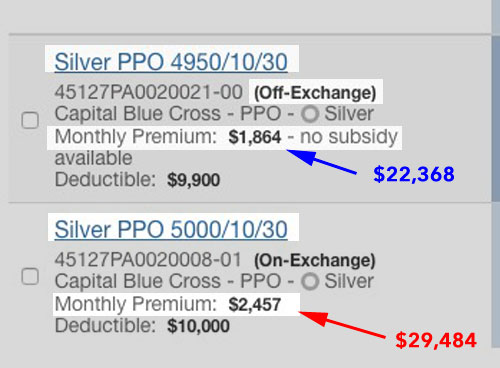 HOWEVER, that's not even my main point. which is the highlighted words above.

In Mr. Gallagher's case, he isn't getting any tax credits this year or (I assume) next year...but if he was, the premium estimate would only reflect his 2017 tax credits, NOT how much they increase for 2018.

I CAN'T STRESS THE IMPORTANCE OF THIS ENOUGH.

Guess what? At the exact same income level, his tax credits in 2018 would likely increase to a whopping $16,992. Mr. Gallagher would be eligible for $1,416 in tax credits per month.

Furthermore, since Gold or Bronze plans would only have increased by a much smaller amount (perhaps 8-10%), the odds are that he and his family would be able to get a Gold plan for less than the Silver, or a Bronze plan for dirt cheap.