CoveredCA announces Open Enrollment promotion, reminds Californians that the Mandate Penalty is back

Covered California and the Challenged Athletes Foundation Team Up to Promote Open Enrollment and the Dec. 15 Deadline for Coverage During All of 2020

Covered California continued its statewide open enrollment campaign by teaming up with the Challenged Athletes Foundation in San Diego for its Holiday Boot Camp on Tuesday. The event comes as Covered California alerts consumers about a critical upcoming deadline. Consumers must sign up by Dec. 15 if they want their coverage to start on Jan. 1.

A few weeks ago, I did a write-up about a concerning development at HealthCare.Gov: The growing push under the Trump Administration to not only partner with 3rd-party web brokers (which has been done since the first days of the ACA under the Obama Administration), but to actively promote those third-party brokers over HealthCare.Gov itself.

In and of itself, this wouldn't be too problematic as long as people are still ultimately enrolling in fully ACA-compliant policies and receiving ACA subsidies if they're eligible for them. Hell, one of these 3rd-party authorized web brokers even has a banner ad at the top of my website...which I only allow because this particular one only sells on-exchange ACA-compliant policies.

I have a different California-specific post coming later this afternoon, but I stumbled across a mildly interesting bit of data and figured this would be a good time to share it while I wait to be able to post that one.

As you may recall, while the ACA required that most individual market major medical healthcare policies sold have to comply with full ACA regulations, there were some exceptions to this. The biggest exception made was for major medical plans which had been continuously enrolled in since before the ACA was signed into law in March 2010.

These plans were grandfathered in, and so are appropriately called "Grandfathered Plans", and applied to perhaps 5 million people or so back in 2014, when ACA-compliance became mandatory for newly-sold policies.

MAJOR UPDATE: Californians: How much will CA's expanded subsidies reduce YOUR ACA premiums?

IMPORTANT: As I've noted before, Covered California has arranged to expand and enhance their ACA premium subsidies beyond the official ACA formula starting with the 2020 Open Enrollment Period. Back in October, I posted a detailed analysis, complete with tables and graphs to explain just how much hundreds of thousands of Californians could save under the new, beefed-up subsidy structure.

However, Anthony Wright of Health Access California just called my attention to the fact that I made a major mistake in my analysis which impacted every one of the examples: I was basing them on the draft enhanced subsidy formula from back in May instead of the final version, which is considerably more generous at the upper end of the sliding scale than the draft version was!

I've therefore gone back and re-calculated and re-written the entire blog post below with the updated, corrected subsidy formula. My apologies for the error!

I'm very pleased to see this.

I've made quite a bit of fuss about California expanding availability of ACA financial subsidies to those earning 400 - 600% of the Federal Poverty Line ($75K for a single person, $154K for a family of four). The subsidies aren't massive for most people, but for hundreds of thousands of Californians--especially older folks earning between 400 - 450% FPL--this is a huge savings. In addition, they're sweetening the subsidies somewhat for those already receiving ACA tax credits.

The only real concern I had about this is whether enough people in California know about it. Just like with reinstating the mandate penalty (which California has also done this year), expanding & enhancing ACA subsidies isn't gonna cause a spike in enrollment if no one knows they're available. A lot of people who might have checked into it in prior years isn't likely to bother taking another look if they don't know that the income cut-off threshold has gone up, and many others have never bothered trying in the first place because they "heard somewhere" that they won't qualify.

This press release came out last week but I covered all the other state-based exchange Open Enrollment press releases so I figured I should include this one as well:

Covered California for Small Business Announces Expanded Choices and an Average Rate Change of 4.1 Percent for 2020

UPDATE: You can window shop for 2020 Open Enrollment TODAY in 7 states! 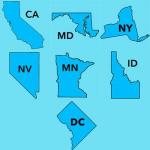 I'm not sure how this slipped by me, but in addition to Covered California already having launched their 2020 Open Enrollment Period yesterday, five other state-based ACA exchanges are already partly open as well. That is, you can shop around, compare prices on next year's health insurance policies and check and see what sort of financial assistance you may be eligible for:

I'm not sure when the other 7 state-based exchanges will launch their 2020 window shopping tools, nor do I know when HealthCare.Gov's window shopping will be open for the other 38 states, although I believe they usually do so about a week ahead of the official November 1st Open Enrollment Period launch date.

Californians: How much will CA's expanded/enhanced subsidies reduce YOUR ACA premiums?

As I noted yesterday, while the 2020 Open Enrollment Period doesn't officially start until November 1st across the rest of the country, in California it already started on October 15th, two weeks earlier than everywhere else.

I also noted that there's two important points for CA residents to keep in mind starting this Open Enrollment Period:

REMINDER: Six* States will have their own Individual Coverage Mandate Requirement in 2020!

*(Yes, I know, the District of Columbia isn't actually a state, and Vermont's mandate is...well, read on...)

As the 2020 Open Enrollment Period rapidly approaches (it starts November 1st nationwide...except for California, where open enrollment is starting on October 15th), it's time to start getting the word out about some important things to keep in mind this fall.

One of the most critical things to remember for residents of California, the District of Columbia, Massachusetts, New Jersey, Rhode Island and Vermont is that each of these states* has reinstated an individual healthcare coverage mandate law/ordinance to replace the federal ACA mandate penalty which was zeroed out by Congressional Republicans back in December 2017. This means that if you live one one of them, unless you receive an affordability, hardship or other type of acceptable exemption, you'll be charged a financial penalty when you file your state/district taxes for 2020 in spring 2021 if you don't have qualifying healthcare coverage.

OK, it feels a bit surreal to post about California's 2020 ACA premiums--and especially mentioning the fact that they're reinstating the ACA individual mandate penalty at the state level--on the very same day that the entire ACA itself is on the brink of complete oblivion (again), due specifically TO the fact that Congressional Republicans repealed the federal mandate penalty.. 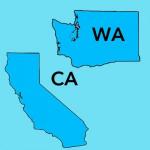 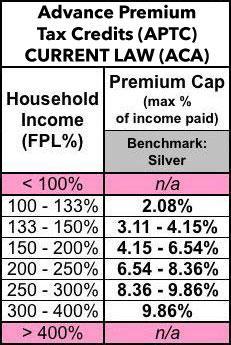