UPDATE: Ohio & Georgia: 11-year old girls can now be sentenced to life (or death) for being raped. 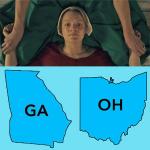 UPDATE: It's been pointed out that the Supreme Court has ruled that minors can't receive the death penalty, so I guess that means "only" life in prison for them. If they're 18 or older, however...

On the other hand, several people have noted that an 11-year old pelvis isn't generally developed enough to even deliver a baby safely, along with other health risks, so it could very well be a death sentence regardless, so I'm leaving the headline as is.

Georgia's "pro-life" Republicans have passed a law that would subject a woman who self-terminates after six weeks to life imprisonment or capital punishment. https://t.co/vbBpfRzIgj @Slate pic.twitter.com/Djqn0LbLf6

Ohio GOP: Men can keep raping their wives, but now they can force them to give birth as well! Seriously.

The tagline for ACASignups.net is "healthcare policy data, analysis & snark", so naturally many of my blog posts have tongue-in-cheek, sarcastic headlines.

This is not one of those times. The headline above is absolutely, sickeningly true.

The six-week abortion ban known as the "heartbeat bill" is now law in Ohio. That makes Ohio the sixth state in the nation to attempt to outlaw abortions at the point a fetal heartbeat can be detected.