In which Tulsi Gabbard literally calls her own preferred healthcare bill un-American. Seriously. 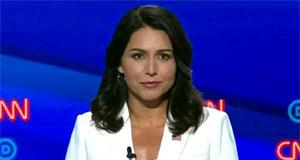 Both evenings of the Detroit Democratic Debates earlier this week started off with half-hour segments on healthcare policy. I meant to do write-ups about both of them but for one reason or another never got around to it until now. Tons of other healthcare wonks have already written their own think pieces by now, so I'm not going to go back and rehash the whole thing at this point.

HOWEVER, there's one quote which made my jaw drop, and it doesn't come from any of the Big Four (Biden, Warren, Harris or Sanders). It comes from Hawaii Representative Tulsi Gabbard...and it didn't even come during the debate itself, but afterwards in the "Spin Room" (they actually call it that) with Anderson Cooper.

During the debate itself, Gabbard's only response on healthcare was to trash Kamala Harris' new proposal (which I covered here...it sits sort of halfway between the "Medicare for America" bill I'm a fan of and Bernie Sanders' version of "Medicare for All"):

GABBARD: The reality is right now, we don't have a healthcare system. We have a sick care system, and there are far too many people in this country who are sick and unable to get the care that they need because they cannot afford it. So the core of this problem is the fact that big insurance companies and big pharmaceutical companies who've been profiting off the backs of sick people have had a seat at the table, writing this legislation.

Now, Kamala Harris just talked about Kathleen Sebelius who helped write her bill. This just pointed to the fatal flaw in her proposal. Sebelius works for Medicare Advantage, a private insurance company who will stand to profit under her plan. If we're seeking to really reform our healthcare system, we've got to shut out big insurance and big pharma out of the drafting process so they cannot continue to profit off the backs of the sick people in this country who are searching and in desperate need of care.

I should note that "Medicare Advantage" isn't a company any more than "Obamacare" is a company. Sebelius does sit on the board of directors of Devoted Health, a Medicare Advantage provider, which is what Gabbard was referring to there.

However, it was after the debate, when she was interviewed by Cooper (see embedded video above), where Gabbard gaslighted the hell out of viewers (without any pushback by Cooper, I should note). The first few minutes were about her attack on Harris' criminal justice record as California Attorney General, which was also filled with inaccuracies, but it was the exchange starting at around 3:30 to which a friend on Twitter (@nycbubbles) called my attention:

Cooper: In terms of healthcare, where are you on the spectrum of Medicare for All, or improve Obamacare...where are you?

Gabbard: Well, first, let me just say, our objective has to and must be making sure that no person, no American who is sick in this country should go without care because they can't afford it. That's why I have been and continue to be a supporter for Medicare for All that would guarantee that quality healthcare for every single American in this country. I also believe like every other developed country in the world that has universal healthcare that there is a role for private insurance to play for those who want it.

Cooper: Do you think that for those who are embracing taking away private insurance from people alternately, is that just politically/strategically a non-starter?

Gabbard: I don't know about the politics of it, but I just think about it from the perspective of people...of the American people...that if all of a sudden you are taking away their choice...that's not a very American thing in my opinion. I think our responsibility as leaders is to meet the challenge and address the problems that people are facing that they're suffering because of big insurance and big pharma's influence over our healthcare system for so long, how they are profiting on the backs of sick people. So let's do our jobs, try to bring down the cost of healthcare in this country that's exorbitant, make sure people can get the quality care that they need, and if they still choose that that's not what they want, they can go get the private insurance.

First of all, the "Medicare for All" bill which Tulsi Gabbard, as she states herself, is currently a co-sponsor of, is H.R. 1384, the House version introduced by Rep. Pramila Jayapal in February of this year.

Secondly: Just like Bernie's version in the Senate, H.R. 1384 specifically prohibits duplicative coverage by private insurance companies. It does allow private insurance to cover any "supplemental" services not already included in the scope of the bill, but as I've explained numerous times before--and as Bernie Sanders himself openly admits and even brags about--that amounts to "nose jobs":

(a) In General.—Beginning on the effective date described in section 106(a), it shall be unlawful for—

(1) a private health insurer to sell health insurance coverage that duplicates the benefits provided under this Act; or

Tulsi Gabbard just called her own bill...a bill supported by 117 other House Democrats, I should note...un-American.

Now, it's true that Kamala Harris is also a cosponsor of the Senate version of "Medicare for All" introduced by Bernie Sanders, and up until a week ago, I was extremely confused about her own contradictory statements on the issue...and of course Harris has also co-sponsored several other healthcare expansion bills, as I noted back in June. That's quite normal--there's nothing wrong with a member of Congress sponsoring multiple bills on the same topic if they think all of them would be an improvement over where things stand today.

However, Harris has since explained that she's re-thought how to approach Medicare for All and has decided to go a slightly different route, by introducing a version which at least does partially allow for private (or at least semi-private) health insurance policies, in the form of Medicare Advantage plans (which are publicly funded but privately administered).

More importantly, though, Harris never called the "pure" Medicare for All variant "un-American"...and she sure as hell didn't have the chutzpah to do so while she's a sitting cosponsor of the legislation.

What makes all of this all the more sickening is that Gabbard said this in the context of attacking Harris' plan for NOT allowing private insurance, which Harris' plan DOES (sort of), while simultaneously co-sponsoring a version herself which DOESN'T.

The multilayered mendacity here is breathtaking.

Now, maybe Gabbard is planning on releasing her own modified version of H.R. 1384 which would allow for private major medical insurance, just as Harris has. If so, fine...although doing so would completely destroy her own argument against Harris, of course. I don't think that's very likely, though, seeing how Gabbard lists and links to H.R. 1384 on her own campaign website.

This is Trumpian-level gaslighting on the part of Tulsi Gabbard. Everyone appears to have gotten so swept up in their criminal justice exchange that few seem to have noticed this part.

Tulsi Gabbard
Medicare for All