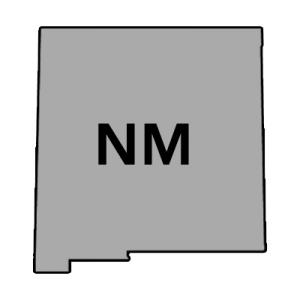 New Mexico’s exchange had completed about 75 percent of their enrollment website when HHS changed the design guidelines in the fall of 2014.  The exchange then applied for a $97 million federal grant to help pay for the website changes as well as other costs, but the grant was denied. Ultimately, it was decided in 2015 that continuing to use Healthcare.gov would be the most fiscally responsible option. And the state has continued to use the federal enrollment platform ever since.

Actually, there's an interesting little side story to the "$97 million grant request" referenced above, which I wrote about over three years ago:

The exchange applied for $97 million to meet the new guidelines and pay some other costs, but CMS denied that request in November.

Here's the backstory: The Republican Governor of New Mexico, Susana Martinez, apparently cost her own state nearly $100 million purely by being unnecessarily rude and sarcastic to the Center for Medicare & Medicaid Services. Seriously:

The second phase build out is a 20-month process that was supposed to start in January 2015 and run through September 2017, when New Mexico’s system would be run entirely in-state. There’s even a nifty timeline of all the things to be done:

(Timeline for implementation of NMHIX, fr. NMHIX board presentation, Jan, 2015)

But when the state submitted it’s application to the federal government for funding, it included letters from state leaders, including Governor Martinez and then-Secretary of Human Services, Sidone Squier.

NMHIX staff told their board in January that the feds specifically cited those letters in their denial.

“Letters attached to the application indicated [the] state was questioning the benefit of the changes that were required,” staff wrote in a January presentation to the board.

...“I am concerned, however,” Governor Martinez wrote, “that New Mexico’s need to apply for this additional grant funding is due to your department’s decision to require changes in our state’s exchange design.” “The amount of funding represented in the application greatly exceeds that necessary to produce our vision for an exchange,” she continued.   She went on to blame the federal agency, saying it had “exacerbated” problems by requiring New Mexico follow federal guidelines in building a one-stop-shop system for all New Mexicans.

In any event, New Mexico gave up their first attempt at a fully independent ACA exchange and has instead piggybacked on HealthCare.Gov for the past five years...but then this happened:

Prior to 2017, state-based marketplaces using the federal enrollment platform were able to use the Healthcare.gov platform for free, while funding and operating the rest of their exchange functions themselves. HHS planned to start charging these states 3 percent of premiums as of 2017, but the fee was gradually phased in (starting with 1.5 percent in 2017 and 2 percent in 2018).

In 2018, BeWellnm (the state-run exchange) paid $5.4 million to the federal government for the use of the HealthCare.gov enrollment platform. In 2019, it’s expected that the exchange will have to pay $10.9 million to use HealthCare.gov. In order to reduce user fees, the exchange board considered the issue during a September 2018 board meeting, and voted unanimously to transition to a fully state-run exchange in time for the 2021 plan year.

This is exactly the same reason that Nevada is moving onto their own full platform starting in 2019, and is why Oregon is seriously considering doing so as well. Ironically, both Oregon and Nevada had their own full exchange platforms for the very first Open Enrollment Period, but both of them had so many technical problems the first time around that they were scrapped. The situation has changed dramatically since then, however; the bugs have all been worked out, and any state should be able to launch their own fully-functional, smoothly-operating exchange "out of the box" with minimal fuss or expense at this point.