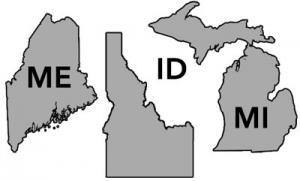 Here's a few articles showing the current state of play:

Finally, there's this blunt assessment by Jesse Cross-Call of the Center on Budget and Policy Priorities:

Meanwhile, in Idaho, I mistakenly reported (based on an erroneous report out of idaho) early last week that "Reclaim Idaho", the grassroots organization which has been working to put ACA Medicaid on the ballot this November in a deep red state, had reached their petition signature goal; it turned out they were still about 1,000 signatures shy.

The good news is that they did indeed meet their target before the deadline after all...and then some!

Idaho is poised to allow a vote on Medicaid expansion after an activist group said it has collected enough signatures to put it on the November ballot.

Reclaim Idaho said it has collected the required 56,192 signatures needed to place the measure on the ballot. The deadline to turn in the signatures is Monday.

According to the group, county clerks need to verify the signatures by June 30 in order for the initiative to be placed before voters.

The initiative would provide coverage for up to 62,000 Idahoans who now fall into a coverage gap, making too much to qualify for Medicaid but not enough to qualify for subsidized health insurance through the state insurance exchange.

...Idaho would join Utah as the second state in the last month where groups have gathered enough signatures to place Medicaid expansion on the November ballot. Groups in Nebraska and Montana are also attempting to gather enough signatures.

(Sidenote: Montana already expanded Medicaid a couple of years back but needs it to be reauthorized; apparently they're planning to go the ballot initiative route.)

Unfortunately, even if they manage to get it passed by the voters...

Even if Idaho voters approve the ballot measure in November, state lawmakers and the governor will have to implement expansion. At least one GOP gubernatorial candidate, Rep. Raúl Labrador, said he would consider fighting it if he is elected and the expansion initiative is passed.

“I think that they need to be informed about what Medicaid expansion would do for the state. If you look at every single state that has expanded Medicaid, they’re spending more money than they expected to spend … and that’s taking away money from all the other needs,” Labrador said during a televised debate last week.

In Idaho, lawmakers and the governor have the power to change or overturn a voter-passed initiative.

I guess the good people of Idaho will just have to use their power to change or overturn their lawmakers and governor, then.

Speaking of GOP governors flat-out defying the will of the voters, that's already happening up in Maine, where ACA Medicaid expansion passed by a wide margin last November:

Obamacare supporters are suing Maine Gov. Paul LePage’s administration to force him to expand Medicaid, accusing the Republican of ignoring a ballot initiative that ordered the state to join the coverage program.

LePage has refused to expand Medicaid nearly six months after 59 percent of the state’s voters approved it in a first-of-its-kind ballot measure. He has insisted he won’t adopt Medicaid expansion unless state lawmakers meet his conditions for funding the program.

“With the goal of getting health care to people as soon as possible, we decided we couldn’t wait any longer,” said Robyn Merrill of Maine Equal Justice Partners, one of the advocacy groups behind the lawsuit.

The lawsuit against LePage‘s administration was expected after the Maine Legislature’s recent session ended without a funding agreement. A LePage spokesperson didn’t immediately respond to a request for comment.

...Roughly 80,000 low-income Maine adults are supposed to qualify for Medicaid benefits starting July 2, according to the ballot measure. The LePage administration skipped an early April deadline to formally notify the federal government it would expand Medicaid.

OK, I think I'm up to speed on the Medicaid expansion situation. Next?