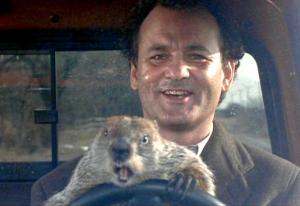 Sorry, I had to clip my toenails today, so I completely forgot...

After the meeting in which the president tries to find areas of possible agreement with GOP leaders, [Republican Speaker of the House Paul] Ryan will hold another vote on repealing the Affordable Care Act. TheWashington Post reported:

The House is scheduled to vote Tuesday on overturning President Obama’s veto of legislation to repeal Obamacare and defund Planned Parenthood. The vote, appropriately scheduled for Groundhog Day, is expected to fail, leaving conservatives to gear up for a final year of budget fights with the president.

Asked about today’s events, White House Press Secretary Josh Earnest told reporters, “Republicans are poised to host another vote in the united states congress today for the 60th time to repeal Obamacare. It’s almost like it’s Groundhog Day, except today it is actually Groundhog Day and they’re doing it again.”

...For the record, estimates vary on exactly how many times Republicans have to repeal all or part of the ACA, but the last time I checked, they were up to 62. In other words, Earnest might have been understating the case a bit.