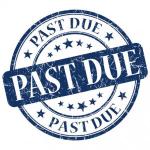 The CMS Dept. has quietly released their latest monthly Medicaid/CHIP enrollment report through the end of May...which happens to line up almost perfectly with what I was expecting: