In other words, I've had a pretty good track record of accurately projecting average premium increases for the upcoming year for five years in a row.

For the 2021 Open Enrollment Period, I've added a new column to the spreadsheets for each state as well as the nation as a whole: The COVID-19 morbidity factor. As I noted the other day:

So far only a handful of carriers have tacked on any substantial rate changes due to expected cost increases from testing & treatment of COVID-19 next year...the general rule of thumb seems to be that the added costs are pretty much gonna be cancelled out by reduced claims from non-COVID healthcare services (delayed/cancelled treatments/procedures, etc).

With that in mind and so many other unknowns, most carriers (so far) seem to be figuring either that these factors will cancel each other out or that there's simply too much uncertainty to even hazard a guess at the impact on their bottom line. As a result, most are settng their COVID morbidity factor at nothing one way or the other. In a few cases (oddly in Michigan this includes Blue Cross Blue Shield/Blue Care Network, which is by far the largest insurance carrier in the state), they don't even mention COVID-19 at all in their actuarial memo, not even to clarify a 0% change from it. Huh.

There's three important caveats to this, however:

Given that the eight states which have posted their preliminary filings so far did so based on data from April or May at the latest...and given how rapidly the COVID pandemic data is changing from day to day...I wouldn't be at all surprised to see some significant changes to many of the filings this year.

With all of this in mind, below is a table tracking the state-by-state preliminary and final rate changes for the 2021 ACA-compliant individual (and sometimes small group) markets. Scroll down for individual state entry links. 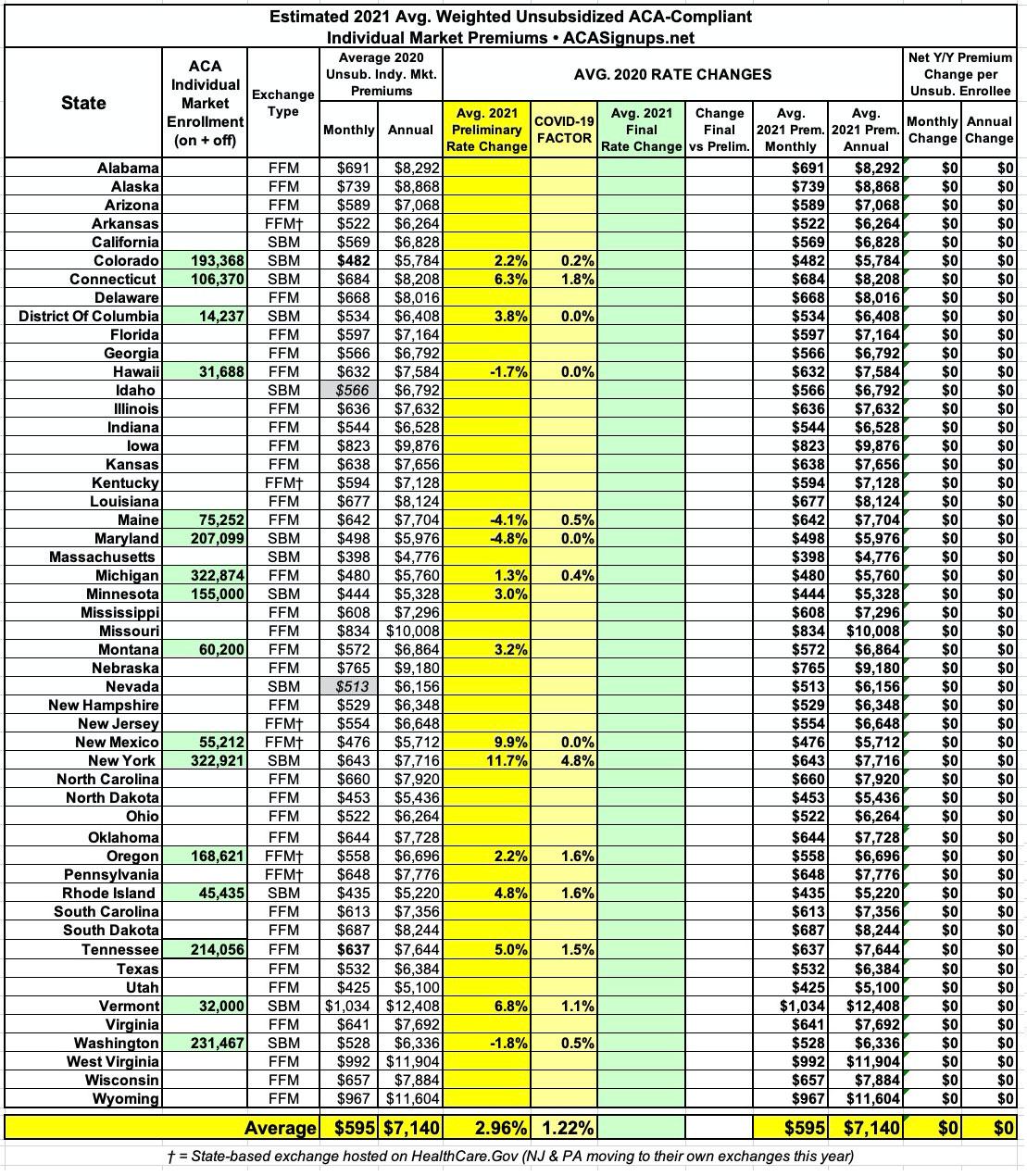 As you can see, so far, the average weighted premium increase on the ACA individual market is around 2.6%, with about 1.5% of that being due specifically to the expected impact of COVID-19 on 2021 premiums. Remember, this isn't about how the pandemic is impacting the carriers bottom line this year, it's about how much they expect it'll impact them next year...which is of course a massive question mark at the moment for even the most skilled actuary.

UPDATE 7/24: As shown above, I've added five more states since this post was originally written (Connecticut, Hawaii, Minnesota, Montana and Tennessee). However, only three of them have information about any COVID-19 impact; Minnesota and Montana's actuarial memos aren't available yet. If you only include the 12 states which have specific COVID-19 data, the average increase is 2.0% with 1.1% of that being COVID-19 specific.

UPDATE 7/31: As shown above, I've updated Tennessee and have added Rhode Island and Colorado, for a total of 16 states. I still don't have COVID impact data for MN or MO). If you only include the 14 states which have specific COVID-19 impact data included, the average increase is still nearly 3.0% but the COVID factor is more like 1.4%.

In the future, use this link for ongoing 2021 Rate Change updates.