UPDATE: How many people will #GetCovered via COVID-19 SEPs? It's complicated. 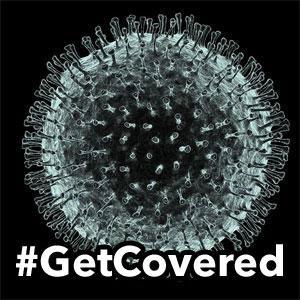 I've written a LOT lately about the dozen state-based ACA exchanges which have implemented COVID-19-specific Special Enrollment Periods for uninsured residents...as well as the two ACA exchanges (Idaho's, which is state-based, and The Big One, HealthCare.Gov, which hosts 38 states) which haven't done so as of yet.

Given how much outrage there's been at the federal government for not opening up HC.gov to a COVID SEP (Idaho has somehow managed to escape notice for making the same decision) by practically every party (even the American Enterprise Institute, which isn't exactly a lefty organization, is calling for one), it's worth taking a look at the states which do have COVID SEPs open to anyone uninsured to see just how many people are actually taking advantage of them.

First, it's important to understand that, as I explained last Friday, around ~8,000 people/day typically enroll in ACA exchange plans on average nationally even during the off-season (that is, outside of the official Open Enrollment Period). This estimate is based on somewhat outdated data, I admit (it's from 2015), but it's the best I have right now. Those ~8,000 people are generally taking advantage of normal ACA Special Enrollment Periods, due to Qualifying Life Events such as:

...and so on. At the same time, around ~9,000 people per day are dropping their exchange coverage for similar reasons in reverse: Turning 65 and moving to Medicaid; getting a new job with employer-based coverage; getting married or divorced; or going to prison/jail or joining the military.

The only way I can figure out what impact the COVID-19 SEP is having is to compare the number of COVID SEP enrollees against what they'd typically be during the same time period. This is a very crude methodology for several reasons, and the data is still pretty sparse, but again, it's the best I can do for the moment. Unfortuantely, of the 12 state-based exchanges which have launched official COVID SEPs, only four of them have released any hard data so far to my knowledge (they happen to be four of the ones which have extended their deadlines).

Here's what I've come up with:

Colorado accounted for 1.5% of all 2020 Open Enrollment Period QHP selections. Assuming exactly 8,000 per day nationally, and further their normal SEP enrollment is representative, you'd normally expect around 117 people to use SEP enrollment per day.

According to their most recent press release from April 2nd extending their COVID SEP deadline:

Since March 20, approximately 5,200 individuals protected their health and safety by signing up for a health insurance plan through this Special Enrollment period. People who enroll during the extended timeframe will have coverage as of May 1.

According to their April 2nd press release also extending their deadline:

“Over the last two weeks, nearly 1,400 residents have been able to enroll in affordable, high-quality health insurance plans thanks to a new special enrollment period offered by Access Health CT,” Governor Lamont said.

Washington state was the first SBE to launch a COVID-19 SEP, back on March 10th. The state accounted for 1.9% of all 2020 OEP selections, so that'd extrapolate out to around 149 per day.

via their extension press release:

Since March 10, more than 4,000 uninsured individuals have requested a special open enrollment with over 2,500 having completed their enrollment for coverage starting April 1.

Maryland just extended their COVID-19 SEP as well. They accounted for 1.4% of all 2020 OEP selections, which would translate into roughly 111 per day.

The enrollment period began Monday, March 16, and will now run through Monday, June 15.

...To date, more than 10,000 Marylanders already have enrolled in health coverage through the Coronavirus Emergency Special Enrollment Period. More than 85% qualified for free coverage (Medicaid) or financial help to lower the cost of a private health plan. Also, more than half of all the enrollees are young adults ages 18-34. This special enrollment is for private health insurance. Those who are eligible for Medicaid may apply any time of year.

On the one hand, this works out to 10,000 / 16 days, or 625 per day...or 5.6x the normal SEP load. On the other hand, it also includes Medicaid enrollment, which eligible individuals can enroll in at any time anyway, with or without a SEP in place, so that's pretty misleading.

That's an extremely wide range...and it's further complicated by other important factors:

While it's very difficult to extrapolate any of this limited data into a national projection, my gut tells me that of these four states, at least, Colorado is likely the most accurate model to go with. If so, it suggests that 3.5 - 4.0x as many people would enroll in ACA exchange QHPs nationally over the next, say, two months if HealthCare.Gov (and Your Health Idaho) were to launch official COVID SEPs as well. If so, that would mean something like 22,000 additional people per day over a 60-day period, or perhaps 1.3 million more than would normally enroll.

If Washington State was closer to the national model, it could be as few as 105,000 additional enrollees. If Maryland was the model (assuming Medicaid wasn't a significant factor, which I'm pretty sure it is), it would be closer to 2.2 million.

Instead, with 39 states being restricted to standard SEPs which require full documentation and jumping through other hoops, it's likely that the number will be lower as the process bottlenecks.

Again, this is all extremely shaky back-of-the-envelope math. For all I know, the other 8 state-based exchanges offering COVID SEPs are enrolling hardly anyone through it...or they could be increasing enrollments tenfold. And maybe 5 million people will still make it through the normal HealthCareGov SEP verification system after all. Keeping my fingers crossed, anyway...

UPDATE: I've received updated numbers from Maryland including a breakout of their exchange enrollments (QHPs) vs. Medicaid. As of yesterday (4/06), they've enrolled:

It's also worth noting that 32% of the COVID SEP enrollees are unsubsidized, which is somewhat higher than Maryland's normal Open Enrollment figure (24% unsubsidized).

UPDATE: I've also heard from Minnesota (MNsure). Minnesota enrolled 110,000 people this year, or just under 1% of all enrollees, so I'd normally expect around 77 SEP enrollments per day. They announced their SEP effective March 23rd, so it's been 14 days, which would normally mean around 1,100 SEP enrollments over that period. However, MNsure says:

That's 1,812 non-COVID SEP enrollments, which suggests that my 8,000/day "normal circumstance" estimate might actually be too low. In any event, around 60% of their SEPs during that period are COVID-specific. Put another way, Minnesota has had 4.2x as many SEP enrollments as I'd normally expect during the 2 weeks in question.

UPDATE: I've also heard from the Nevada exchange. They launched their COVID SEP on March 17th, and report 1,534 QHP selections using it, or 73/day so far. I'd normally expect around 54 per day in Nevada, so that's a 35% increase. Nevada, like Connecticut and Washington State, has a bit of a barrier involved (you have to attest that you didn't enroll during open enrollment, and they they have to confirm that first), which likely explains the lower figures.

OK, so now we have three states (Colorado, Maryland and Minnesota) with "no strings attached" SEPs all posting similar numbers: 3.7x, 3.3x, 4.2x. Across the three, they're averaging around 3.9x as many SEP enrollments as I'd typically expect, which again would be around 23,000 additional enrollees per day, or 1.37 million additional enrollees due specifically to the COVID SEP.

Around 73% of ACA enrollees live in HealthCare.Gov states this year, so based on these estimates, I'd say a good 1.0 million additional people would enroll via HC.gov if they had a 60-day, "no strings attached" COVID-19 SEP than without one. Of course a lot more people will still likely enroll using the normal "coverage loss" SEP, but as I explained the other day, that's gonna get ugly.

UPDATE: Hmmm...MNsure sent me their actual hard SEP numbers since the end of the 2020 Open Enrollment Period (12/23/19). It's kind of interesting...their pre-COVID SEP enrollment averaged 104 per day (higher than my 77 estimate), but also notice the wide range...from as low as 17/day the week right after the deadline (which also included Christmas of course) to as high as 209 in the last week of February...for reasons unknown. The first 2 weeks of COVID SEPs are more like 2.8x higher than the actual pre-COVID numbers:

What really matters is the additional enrollments because of the COVID SEP. In Minnesota's case it looks like an extra ~191 per day, which would extrapolate out to perhaps 20,000 additional SEP enrollments per day nationally, or 1.2 million nationally, or ~876,000 via HC.gov states specifically over a 60-day period.

MAJOR UPDATE 4/9/20: I realize this post is a bit of a confusing mess as I've added updates and corrections. The most important factor I didn't account for is the timing of the SEPs in relation to the growing unemployment numbers. Remember, the launch dates of the 12 SBE COVID SEPs has ranged from March 10th - March 23rd. The first big wave of unemployment insurance filings (3.3 million people) came from people who filed between March 15th - 21st. An additional 6.9 million filed for unemployment the following week (March 22nd - 28th...it was listed as 6.6 million at the time but was revised upwards). And just this morning, it's being reported that another 6.6 million filed last week.

That's a total of over 16.8 million Americans losing their jobs in a 3-week period.

If you assume most people who just lost their jobs wait at least a week or so before getting around to dealing with their health insurance coverage, that means the first 3.3 million didn't start submitting SEP enrollments until around the end of March, and the second wave of 6.9 million didn't start until a few days ago.

All of my assumptions above are therefore, for the most part, based only on the initial 3.3 million who filed for unemployment 3rd week of March.

Below I've compiled the data above into a more coherent format, including SEP launch dates, data thru-dates and the % of the total population each state exchange represents. The start dates ranged from 3/10 - 3/23. The deadlines range from 4/15 - 6/15...but I wouldn't be surprised to see several of the earlier states bump out their deadlines further. I'm therefore assuming either a 60-day SEP (which would run the average through to around May 20th) or a 90-day SEP (around mid-June).

As far as I can tell, the 6 states which have reported data so far are averaging around twice as many enrollments via the COVID-19 SEP as they normally would via all traditional SEPs combined (1,185/day vs. 584/day). However, there's some overlap here--many of those 1,185/day would enroll via a traditional "lost coverage" SEP anyway. For them, the COVID rules simply streamline the process. How much of an overlap? Impossible to know; I'd figure perhaps 50% as a ballpark: 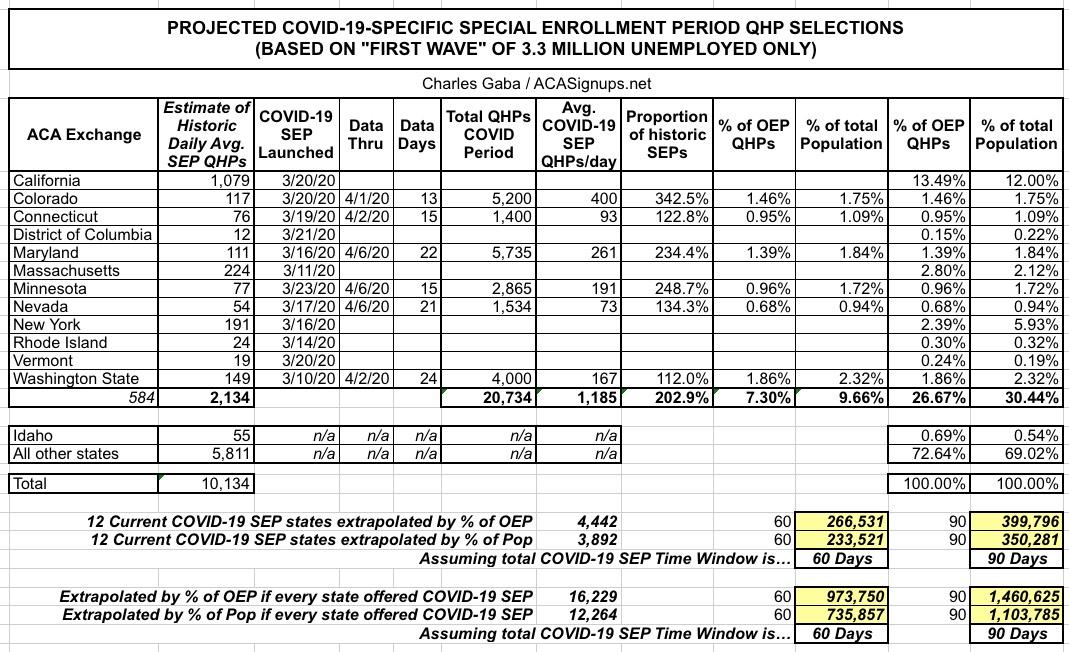 If the spike in unemployed stayed at "only" 3.3 million with a 60-day SEP, based on these data, I'd assume around 250,000 additional Americans would enroll via the COVID SEPs already in place. However, it's up to 16.8 million now...over 5 times as many people have lost their jobs.

If you extrapolate that out, it would become more like:

Of course as I've noted before, most of those newly-unemployed do qualify for a normal SEP anyway due to losing their employer-based health insurance, so some number of people will enroll in one via HC.gov or in Idaho anyway...but the documentation/verification requirements will bog those enrollments down tremendously, so I'd only expect a fraction of this number to actually do so.