What about Cory Booker's healthcare plan? 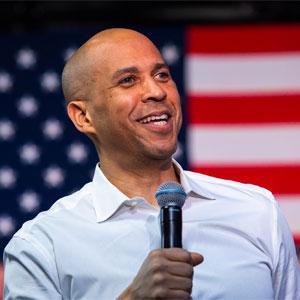 I really should have gotten to all three of them earlier, for which I apologize....especially since at least one of them appears to be pushing a plan very similar to the one I prefer as a long-term goal, Medicare for America. I don't really have time to do a fully-detailed analysis of these right now, but I'm at least highlighting each by cross-posting their proposals. I'll go back and add my own thoughts to these posts propoerly in the near future if I'm able to do so:

In one of the richest countries on the planet, no American should go bankrupt because of medical bills or be forced to choose between groceries and prescription drugs, between paying their rent and seeing a doctor.

As president, Cory will fight for access to quality, affordable and universal health care, end attacks on the Affordable Care Act, and act to bring down prescription drug costs:

Expand eligibility for long-term services and supports to every low and middle-income American and give everyone the choice to live at home.

Currently, an individual can only receive Medicaid assistance for long-term services and supports if she either spends most of her income on her care or has less than a certain level of income (in most states, 222% of the federal poverty line, or $36,541 for a family of two) and has countable assets under $2,000 (or $3,000 for a couple). As a result, people with care needs must often spend down their entire life savings so that they can qualify for Medicaid long-term services and supports (LTSS). Even if they do qualify, states are only required to provide institution-based care and vary greatly in access to home and community-based alternatives, meaning that care options are often effectively limited to nursing homes.

Cory would increase asset limits for long-term services and supports to $200,000 and income limits to 300% of the federal poverty line (approximately $49,380 for a family of two) — ensuring that all low- and middle-income seniors and people with disabilities have access to services through Medicaid. In addition, individuals that exceed the asset and/or income limits would be able to buy into the program, with cost-sharing determined on a sliding scale.

Cory would also offer choices for people requiring long-term services and supports. According to a study by the AARP, 87 percent of adults age 65 and over prefer to stay in their current home and community as they age. But while Medicaid beneficiaries can access institutional care when they need it, not everyone has access to home- and community-based care services. This institutional bias has led to waitlists in excess of 600,000. Cory would move to rebalance long-term services and supports options by requiring that states also offer home- and community-based services to end the waiting lists so that everyone has the freedom to get the care they need in the setting of their choice, including continuing to live at home. Cory will also fight for the Disability Integration Act, to ensure that all people with disabilities have the right to live and access long term services and supports in their homes.

He also puts a heavy emphasis on care workers, which ties in heavily with LTSS:

Pay, train, and empower care workers as the essential workforce that they are.

The people providing care are doing work that is essential to the quality of life for millions of Americans. Yet in overwhelming numbers they struggle with economic insecurity and poverty; half of all home care workers and 37% of those who work in nursing homes rely on public assistance to support their families. Low wages, few if any benefits, irregular schedules, lack of professional development opportunities, and heavy workloads have all contributed to a workforce struggling to make ends meet and a shortage of workers to provide care. It’s simple: until we make these good jobs, we will never meet the growing demand for care. Improving the quality of these jobs is also important for advancing economic security for women and communities of color, as 87% of direct care workers are women and 56% are people of color.

Cory’s plan recognizes that the women and men of the long-term services and supports workforce perform essential work every day and that they should be compensated as such. That means, at a minimum, being paid at least $15 per hour, having access to affordable health care, retirement benefits, paid family and medical leave, and other workplace benefits that provide economic security. For direct care workers in publicly-funded programs, Cory’s plan would increase Medicaid funding and direct the Department of Health and Human Services (HHS) to make improvements to workforce planning to guarantee that fair wages, workforce training opportunities, and benefits like health care, retirement savings, and sick time are part of all long-term services and supports programs. Cory would also require that this workforce have a voice at work by directing HHS to support workers who want to join a union or other worker organizations, including by rolling back the Trump Administration’s rule against voluntary payroll deductions, and ensuring that there is a mechanism, like a workforce standards board, for workers to provide input on the long-term services and supports system, including wage rates, standards, and training programs.

Family members often assume the role of caregiver for loved ones, usually due to a lack of affordable alternatives. In 2013 alone, approximately 40 million family caregivers reported providing care to parents and other adult dependents. In addition to the emotional and physical toll of caring for a loved one, individuals incur significant costs. A 2016 AARP report found that family caregivers spend an average of $7,000 annually on out-of-pocket costs associated with caregiving. This amounts to 17 percent of the average male caregiver’s annual income and 21 percent of the average female caregiver’s income. For Black caregivers, out-of-pocket costs are even more34 percent.

Through his Rise Credit, an expansion of the Earned Income Tax Credit, Cory proposes paying family caregivers for the critical work they do, because traditional wage earners aren’t the only Americans working hard to support their families. The Rise Credit would provide up to a $4,000 maximum credit to caregivers of children and relatives under age 6, children with disabilities, or elderly spouses or other dependents. Under the proposal, qualified caregivers would receive the full benefit if they earn less than $30,000 (or $50,000 for a married couple), with benefits phasing out thereafter.

Family caregivers also face challenges navigating complicated programs and benefits, and accessing the training they need to feel confident in the help they are providing their loved ones. To support family caregivers, Cory would improve access to paid family leave, as well as to training, respite, and case management benefits, including by fully funding the Older Americans Act and passing his In-Home CARE Act.

Medicaid costs are shared between the federal and state governments. In order to limit the impact of the program on state budgets, the new costs associated with the expansion of Medicaid LTSS eligibility and workforce standards for care workers would be financed entirely by the federal government, effectively a 100% “match.” This will ensure that every state can expand access without straining other health care programs.

The cost of the program would be financed by making the tax code more progressive including by reforming the capital gains, estate, and income taxes. In addition, several of its provisions would offer cost savings, as compared to our existing system. For example, ending the “institutional bias” would likely yield significant savings as people move out of more expensive institutional care and into home- and community-based care. Cory’s proposal would also have broader economic impacts; 69% of employed family caregivers report decreasing their hours, taking unpaid leave or rearranging their work schedule, and unpaid caregivers cost employers up to $50 billion each year due to absenteeism, turnover, and schedule adjustment costs.