What about Amy Klobuchar's healthcare plan? 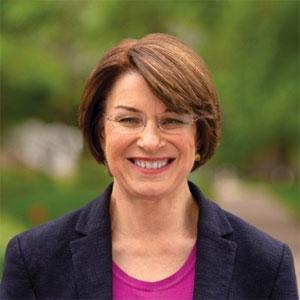 I really should have gotten to all three of them earlier, for which I apologize....especially since at least one of them appears to be pushing a plan very similar to the one I prefer as a long-term goal, Medicare for America. I don't really have time to do a fully-detailed analysis of these right now, but I'm at least highlighting each by cross-posting their proposals. I'll go back and add my own thoughts to these posts propoerly in the near future if I'm able to do so:

Health Care: Amy supports universal health care for all Americans, and she believes the quickest way to get there is through a public option that expands Medicare or Medicaid. She supports changes to the Affordable Care Act to help bring down costs to consumers including providing cost-sharing reductions, making it easier for states to put reinsurance in place, and continuing to implement delivery system reform. And she’s been fighting her whole life to bring down the cost of prescription drugs.

Prescription drugs: When people are sick, their focus should be on getting better, rather than on how they can afford their prescriptions. Yet drug prices are an increasing burden across our country. Amy has been a champion when it comes to tackling the high costs of prescription drugs. She has authored proposals to lift the ban on Medicare negotiations for prescription drugs, allow personal importation of safe drugs from countries like Canada, and stop pharmaceutical companies from blocking less-expensive generics.

Addiction and Mental Health: Amy's dad struggled with alcoholism and she saw the toll that mental health and substance use disorders can take on families and communities. As President, Amy will combat substance use disorder and prioritize mental health, including launching new prevention and early intervention initiatives, expanding access to treatment, and giving Americans a path to sustainable recovery. Her plan will ensure that everyone has the right — and the opportunity — to be pursued by grace and receive effective, professional treatment and help. Read more about Amy’s policies to combat addiction and prioritize mental health here.

Reproductive Rights: When it comes to women’s health, it’s clear that there is a concerted effort to attack, undermine and eliminate a woman’s right to make her own health care decisions. The recent bans in states are dangerous, they are unconstitutional, and they are out of step with the majority of Americans. Amy will continue working to protect the health and lives of women across the country.

As President, Senator Klobuchar will reduce health care costs and expand coverage by:

As President, Senator Klobuchar will tackle the skyrocketing cost of prescription drugs by:

As President, Senator Klobuchar will also make reforms to the health care system by:

In addition, Senator Klobuchar has laid out a plan for her first 100 days that includes executive action she can take immediately to expand access to care and address rising health care costs: