My Half-Assed Tax Credit Explainer: You may qualify for financial assistance in 2020 even if you didn't in 2019! 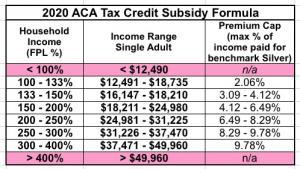 With the 2020 Open Enrollment Period rapidly approaching (it actually kicks off on October 15th in California, and on November 1st in every other state + DC), it's important to keep in mind that many people who didn't qualify for financial assistance in 2019 may qualify in 2020...and in some cases that could mean a difference of thousands of dollars due to how the ACA subsidy formula works and other factors.

First, a refresher on how the ACA formula works for Individual Market enrollees (that is, people who are looking to buy health insurance for themselves and/or their family who don't receive it through their employer, Medicare, Medicaid, CHIP or some other source).

First of all, what is the Federal Poverty Level? Well, that increases a bit every year...and for 2020, it's increasing by around 2.7%: 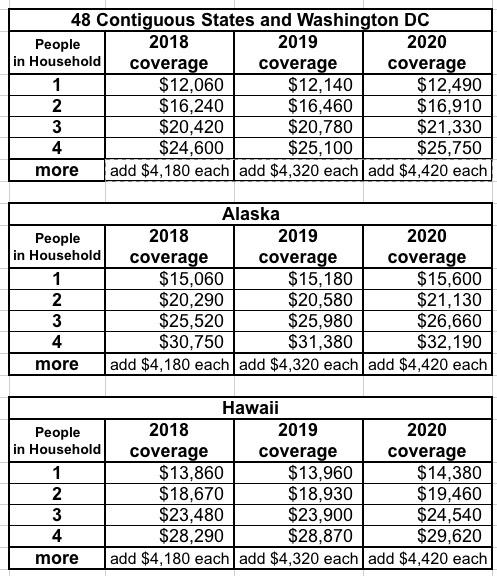 Alaska gets a 25% bump and Hawaii gets a 15% bump over the rest of the country. I presume this is due to the unusually high cost of living in these two standalone states, although it seems to me that New York and California should qualify as well, but what do I know?

OK, so back to the ACA's subsidy formula. 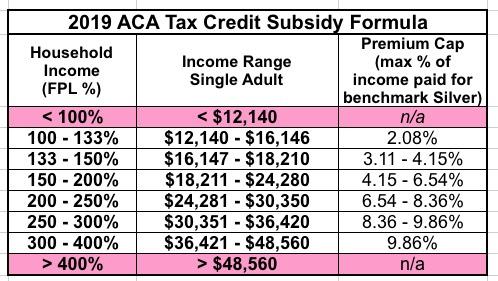 For instance, let's say you're a 40-year old living by yourself in Oakland County, Michigan, and you earn eactly $18,000 this year, or around 148% FPL. You'd qualify for financial assistance if the unsubsidized premium for the benchmark Silver plan costs more than around 4.1% of your income ($738/year, or $61/month). The actual benchmark for a single 40-year old in Oakland County, MI is $325/month, so you'd qualify for $265/month in financial assistance to knock your premium down to $61/month (you'd also qualify for substanital Cost Sharing Reduction assistance to cover most of your deductibles and other out of pocket costs as well, but that's a different discussion).

HOWEVER, for 2020, the table above is changing. Most of this is due to that ~2.7% bump in the Federal Poverty Level, but also notice that the Premium Cap percentages are also slightly lower at each level due to a slight tweak in how that formula is calculated as well. 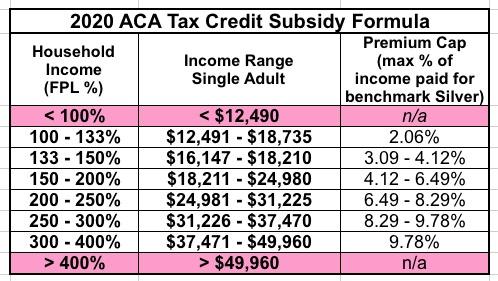 IMPORTANT: Everything here applies to people with household incomes over 138% of the Federal Poverty Level (FPL) in Medicaid expansion states or over 100% FPL in non-expansion states. If you're below 138% FPL in an expansion state, you should qualify for Medicaid. If you're below 100% FPL in a non-expansion state...unfortunately, you're likely going to have a lot of trouble finding affordable healthcare. This is a problem which needs to be fixed by either your state government expanding Medicaid or by federal Congressional action...which, unfortunately, is unlikely to happen before January 20, 2021.

At the lower-income end:

At the upper end range:

However, what if the same guy in our example is 60 years old instead of 40? The unsubsidized benchmark Silver premium increases to $691/month. This doesn't change anything at the lower end of the range, but check out what happens at the upper end:

I know this can all seem confusing, but the bottom line is that tens of thousands of people who earn just a little too much to qualify for ACA tax credits in 2019 may very well qualify for them in 2020...and this could make a dramatic difference in their cost.

It's also important to keep in mind that California has started offering enhanced subsidies to enrollees earning between 200 - 400% FPL, and is extending subsidies to those earning 400-600% FPL (up to $74,940 if you're single). although the 400-600% extended subsidies are far less generous; they max out at 25% of income at the 600% threshold, like so: 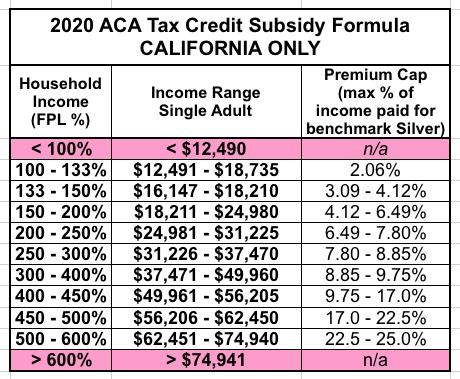 The expanded subsidies in California won't make much difference for most people, but consider a 60-year old single person living in Los Angeles. Their unsubsidized premium is $815/mo.

Massachusetts and Vermont also have their own special, enhanced subsidies available for enrollees earning between 138 - 300% FPL, but those have been in place for years. Washington state is also supposedly expanding subsidies to those earning 400 - 500% FPL, but that isn't set to start until 2021.

BOTTOM LINE: Make sure to visit HealthCare.Gov, CoveredCA.com, or whatever your state's ACA exchange website is and plug in your information to double check to see if you qualify for financial assistance this year! You may be pleasantly surprised.