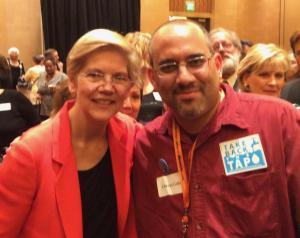 From here, she went on to talk about addressing supposed "low-hanging fruit" like lowering prescription drug prices by importing drugs from Canada, letting Medicare negotiate drug prices, and reducing costs of generics, as well as cracking down on insurance companies. This was likely a veiled reference to a few tenets of her own excellent "ACA 2.0" bill, the Consumer Health Insurance Protection Act, although she's pretty much ignored it since formally re-introducing it in the Senate at around the same time.

Finally, here's what she had to say about achieving universal coverage:

Then, regarding her co-sponsorship of Bernie Sanders' specific M4All bill, which again would be 100% mandatory for nearly 100% of the population, with virtually zero out-of-pocket expenses for anyone, and wth an almost negligible role for private insurance, she said:

...I've also co-sponsored other bills, including expanding Medicaid as another approach that we use. But what's really important to me about this is we never lose sight of what the center is, because the center is about making sure that every single person in this country gets the coverage they need and that it's at a price that they can afford. We start with our values, we'll get to the right place.

I've given Warren high praise for this response before and will do so again here.

In the June debate, however, her response was...different. Of course, it was a different forum and she only had sixty seconds to respond to the question, but still, this was what she said there:

I'm with Bernie on Medicare for all. And let me tell you why. I spent a big chunk of my life studying why families go broke. And one of the number-one reasons is the cost of health care, medical bills. And that's not just for people who don't have insurance. It's for people who have insurance.

In March, Warren had noted that she's also co-sponsored several other bills; the Medicaid-centered version she referenced is Sen. Brian Schatz's "State Public Option Act". She's also the primary sponsor of a robust ACA 2.0 bill, as I mentioned earlier.

By June, however, there wasn't a peep about either of these.

Oddly, for all of her in-depth Plans on every other issue, until a week ago, Warren didn't even mention healthcare reform on the Issues section of her campaign website. Then, this appeared:

Elizabeth supports Medicare for All, which would provide all Americans with a public health care program. Medicare for All is the best way to give every single person in this country a guarantee of high-quality health care. Everybody is covered. Nobody goes broke because of a medical bill. No more fighting with insurance companies.

The basic business model of an insurance company is to take in as much money as you can in premiums and paying out as little as possible in health care coverage.

That leaves families with rising premiums, high deductibles, and fighting with insurance companies to try to get the health care that their doctors say they and their children need.

Insurers protecting their bottom lines restrict your networks of providers and stand in the way when you want to see your doctor or need to see a specialist without going broke.

Medicare for All solves these problems. Everyone can see the doctor they need. Nobody goes broke. And your doctor gets paid by Medicare instead of fighting with an insurance company.

Every American should be able to get the care they need when they need it. This is a goal worth fighting for, and Elizabeth is in this fight all the way. That's why Elizabeth will fight for Medicare for All.

However, the other day she gave a very interesting response to a reporter. I actually missed this; it was called to my attention by Tim Higginbotham for Jacobinmag, which has made no secret of being pretty much in the tank for Bernie:

After the primary debate on September 12, a CBS reporter asked Warren if she’ll be introducing a detailed health care plan of her own. Her response was evasive.

“I support Medicare for All. I think it’s a good plan,” she said, before quickly adding, “I support a lot of plans. Other things that people have come up with, when they’re good plans, let’s do it. This isn’t some sort of contest.”

Higginbotham's article is actually pretty similar to my own, just from the "BernieCare or Bust" perspective. Both of us are left wondering exactly where Warren stands on the issue. The difference is that he's hoping Warren isn't straying from the fold, while I'm hoping that this wording means she's still open to other means of achieving the primary goals as she stated in March: Coverage which is...

...even if it doesn't require Bernies' specific vision in order to achieve it.

And really, those are the two biggest points of contention here: How much of the cost should be baked into taxes vs. out-of-pocket (for which segments of the popualtion)...and how much of it should be mandatory vs. optional (for which segments of the population). Getting ourselves worked into a frenzy over these distinctions seems ludicrous to me...they're important, sure, but not worth tearing ourselves apart over.

Of course, as I keep stressing that any actual Big Healthcare Overhaul Bill which manages to pass through a presumably Democratically-controlled House and Senate in 2021-2022 isn't going to resemble Bernie's vision for M4All no matter what anyway, so the real question goes right back to what I said after the June debate:

I certainly hope her response to that would be "of course!"

The Jacobinmag folks, meanwhile, seems to think she should flatly refuse anything besides his specific bill in that scenario...which would of course be absurd.