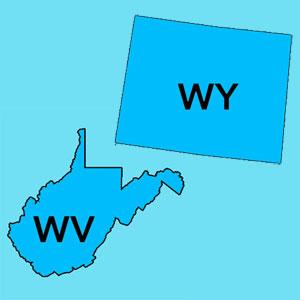 According to the Department of Health and Human Resources, about 159,000 West Virginians are enrolled in Medicaid expansion.

The Trump administration has allowed states to tie Medicaid coverage to work.

West Virginia was one of the first red states to embrace Medicaid expansion back in 2014, and to the best of my knowledge it's been quietly and wildly successful with no complaints to speak of. Trying to mess with it by adding a bunch of complicated (and expensive) administrative hoops just to kick thousands off their coverage was a terrible idea, and I'm glad to see that it's been shelved...at least for now.

Meanwhile, in Wyoming, a similar bill was also killed...and this one was even worse, since unlike West Virginia, Wyoming hasn't even expanded Medicaid in the first place...their work requirement bill would have applied to traditional Medicaid enrollees:

A bill that would have imposed a 20-hour work requirement on those who receive Medicaid has been defeated.

The House of Representatives voted 39-20 to kill the measure that would have removed health insurance if the requirements weren't met. It would have saved the state $5.6 million in Medicaid costs.

Gillette Representative Scott Clem said he disagreed with those who said the bill was trying to hurt people.

"I look at this as a compassionate bill that says we won't let you wallow in self pity, because that's not good for you."

Laramie Representative Charles Pelkey countered that if this population loses its health care coverage, costs go up for everyone because it will lead to an increase in uncompensated care.

It looks like around 60,000 Wyomingites (?) are enrolled in Medicaid in Wyoming...including the elderly, disabled, children, etc., who I certainly hope there would've been exemptions from the work requirement for. Sheesh. It looks like around 18,000 more would receive Medicaid coverage if the state went the other way and expanded the program via the ACA.

Anyway, credit to both WV and WY for...well, for shutting down an incredibly stupid and cruel idea...at least for now.