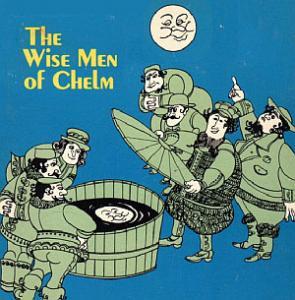 Isaac Bashevis Singer is famous for, among other things, his collection of Yiddish folk tales about The Wise Men of Chelm, a town in Poland which, according to the folk tales, was populated entirely by fools.

One of the stories about the people of Chelm was about a playground located near the top of a cliff. Every once in awhile, a child would fall off the cliff and injure themselves on the ground below.

The Wise Men of Chelm came up with an ingenious solution to the problem: They built a hospital at the bottom of the cliff. That way, the children could be rushed into the emergency room quickly for medical treatment.

I was reminded of this story when reading the following AP article posted moments ago:

Hmmm...$30 million? OK, that's only a portion of how much it'll probably cost to rip up and replace the lead pipes poisoning the city, but it's a start. Great news! Oh, wait...what's that?

...to help pay the water bills of Flint residents facing an emergency over the city's lead-contaminated water supply.

You've got to be shitting me. The water coming through those pipes is still toxic and could continue to be for months or longer. So instead of using the money to actually fix the problem and paying the medical treatment for the 100,000 people you've poisoned, your Big Idea is to issue a credit for the poison that you've been serving up for the past two years??

Well, the residents do deserve a full 100% refund for their suffering, anyway; at least there's that...

...The aid would cover the estimated portion of residential customers' utility bills for water that has been or will be used for drinking, cooking, bathing and washing hands. Customers would still be responsible for paying for water used to flush toilets, water lawns, wash clothes and other purposes.

Holy Crap. This has to be a joke.

"I know I beat you to a pulp last week, Bob...so, in the spirit of generousity, I'm not gonna make you pay me back for the dry cleaning bill to get your blood out of my suit jacket!"

The 21,000 customers, including those who have since moved away, would get a credit for 65 percent of the water portion of their combined water/sewer bill — the part of the bill Snyder's office estimates is used for water that could be ingested or come into contact with skin. The 9,000 residential customers in arrears would be put on a payment plan to catch up on sewer charges and 35 percent of their water fees, potentially over a period of years.

Businesses and other commercial customers would get a 20 percent credit for the water portion of their bill.

Interestingly, the professor who helped expose the lead problem actually has praise for this move...

Marc Edwards, a Virginia Tech professor who helped expose the lead problem in September, said: "It's hard to find moral justification in having (residents) pay for water that is not suitable for consumption nor, until recently, for bathing. This essentially refunds all the money associated with consumption or consumer use. I think it's an amazing gesture of common sense and goodwill, and it corrects an injustice."

...and yes, I suppose it is, except that Snyder isn't exactly doing this out of the goodness of his heart:

Over the weekend, a civil lawsuit — at least the sixth filed so far — was initiated in federal court seeking compensatory and punitive damages and class-action status for approximately 30,000 customers who paid for or were billed for Flint water.

In addition, it's not like Snyder is ponying up the $30 million himself (which he could easily afford to do); that would legitimately impress me. Or he could ask the legislature to reverse the $1.7 billion in corporate tax breaks which they jammed through a few years back for no particular reason; that would easily pay for the 2 years of poison bills and replacing the pipes city-wide. But no, of course not; it's the people of Michigan (not the corporations) who he's asking to foot the bill. Not that I mind ponying up a few bucks myself, of course, but acting like this is some sort of selfless act is pretty naive.

Oh, yeah...not to mention that the water is still too dangerous to use even after it was switched back to the Detroit water system last October:

Residents in Flint, Michigan have been advised to get their water tested after it was revealed that lead levels in some areas are so high that they overwhelm the water filters distributed to citizens.

The Federal Bureau of Investigation said on Tuesday it was joining a criminal investigation of lead-contaminated drinking water in Flint, Michigan, exploring whether laws were broken in a crisis that has captured international attention.

Federal prosecutors in Michigan were working with an investigative team that included the FBI, the U.S. Postal Inspection Service, the U.S. Environmental Protection Agency's Office of Inspector General and the EPA's Criminal Investigation Division, a spokeswoman for the U.S. Attorney's Office in Detroit said.

An FBI spokeswoman said the agency was determining whether federal laws were broken, but declined further comment.

EPA Administrator Gina McCarthy met with officials and community leaders in Flint and told reporters she could not give a timeline for fixing the problem. She said the agency was examining where it may have fallen short, but declined to address the criminal probes.