LATE TO THE PARTY: Graham-Cassidy 2.0 formally released this week 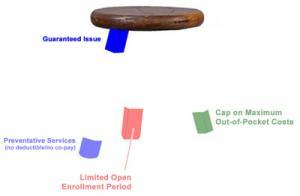 A group of Republicans and Washington D.C. think tanks released a proposal Tuesday that aims to resurrect Obamacare repeal. The consistent chatter around the proposal has drawn ire from the White House and GOP leadership, as the midterms are just months away, and repeal efforts haven’t proved to be winning strategies.

The seven-page whitepaper titled “The Health Care Choices Proposal: Policy Recommendations to Congress” asks lawmakers to scrap the Affordable Care Act (ACA) and replace it with block grants. In other words, the bill would eliminate Obamacare subsidies and Medicaid expansion, and give states a fixed dollar amount so they can set up their own health system.

Yes, this is otherwise known as Graham-Cassidy 2.0, which Kimberly Leonard first wrote about way back in February, and which I wrote updates about in April and May.

The “fresh approach” resembles the Graham-Cassidy bill, one of six failed GOP health bills from last summer that effectively deregulated the insurance market. “States decide how much insurers can charge people who are sick, required benefits, and cost-sharing,” Kaiser Family Foundation’s Larry Levitt said last September of the bill. Had it been enacted, millions of additional people would be uninsured, according to the Congressional Budget Office.

...A major difference between the latest Republican proposal and that of last year’s is that the recent one does not significantly cut Medicaid. Under Graham-Cassidy 2.0, states have to offer “premium assistance” to people enrolled in Medicaid insurance....In other words, the federal government will likely have to foot the bill for the sicklier Medicaid crowd.

Last year’s Graham-Cassidy bill was also criticized for using a formula that penalized states who expanded Medicaid. In this proposal, these states are still losers, tweeted Levitt.

...As the think tanks try to encourage lawmakers to undo the Obama-era health law, people who purchase insurance on the individual market stand to lose. For states to receive block grant funding, they don’t have to require insurers to provide all 10 essential health benefits afforded under the ACA. And insurers can charge older people significantly more.

States and insurers have to follow some rules. For example, under the proposal, no health plan can cover abortion.

For what it's worth, the first version of Graham-Cassidy had four different analyses which projected that 21 - 32 million people (around 10% of the country) would lose healthcare coverage if it went into effect. The estimates came from the Center for American Progress, the Commonwealth Fund, the Brookings Institute and Physicians for a National Health Program.

As for this version (G-C 2.0), Aviva Aron-Dine and Matt Broaddus of the Center on Budget and Policy Priorities (CBPP) just released a new analysis of the expected impact it would have if signed into law:

Overall, New Proposal Would Cause Millions to Lose Coverage

Because the proposed block grant could not replace the ACA coverage programs the plan would eliminate, the Cassidy-Graham bill would have resulted in large coverage losses. CBO was not given time to analyze Cassidy-Graham in full, but its preliminary analysis concluded the bill would cause millions to become uninsured. Drawing on CBO’s analyses of earlier bills, independent analysts at the Brookings Institution estimated that the September 13, 2017 version of Cassidy-Graham would have caused about 21 million people to lose coverage in the years when its block grant was in full effect.[15] That would have resulted in a non-elderly uninsured rate of about 18 percent (about 50 million people), versus 10.7 percent (29 million people) in 2017.[16] (See Figure 1.)

Since last September, Congress enacted one provision of Cassidy-Graham, repeal of the ACA’s individual mandate, as part of the 2017 tax bill. The combination of the new proposal and the already-enacted repeal of mandate would likely result in an even higher uninsured rate than would have resulted under last year’s Cassidy-Graham bill. That’s because, assuming its sponsors do not intend to increase federal deficits, it would likely provide less federal funding for coverage than Cassidy-Graham, for two reasons.

First, Cassidy-Graham funded its block grants in part with the savings from repealing the ACA’s individual mandate. But when Congress repealed the mandate as part of the tax bill, it diverted the resulting hundreds of billions in savings to help pay for tax cuts. That leaves less funding available for the block grants in the new plan.

Second, the new proposal would use some of the remaining resources from repealing ACA coverage programs to pay for a massive expansion of health savings accounts. That would further reduce the funding available for block grants and would do nothing to mitigate coverage losses from eliminating Medicaid expansion and individual market subsidies, although it would provide high-income people with additional tax sheltering opportunities.