Think you'd be safe if ACA provisions were repealed because you have Employer-Sponsored Insurance? Guess again. 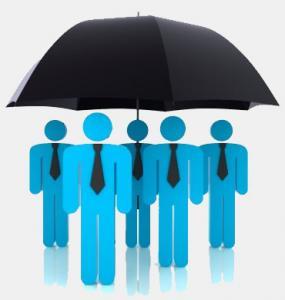 About 90% of my focus here at ACASignups.net is on the two biggest sections of the ACA: The Individual Market (3-legged stool, exchanges, subsidies, etc.) and Medicaid expansion. I tend not to write much about Medicare, "traditional" Medicaid or the Employer-Sponsored Insurance (ESI) market, which mainly consists of the Large Group Market (companies with 50 employees or more) and the Small Group Market (companies with fewer than 50 employees). As it happens, the ESI market covers nearly half the U.S. population (roughly 155 million Americans, give or take).

Under the ACA, individual market policies have to include the following "Blue Leg" provisions to be considered ACA-compliant:

Small Group policies are legally required to cover all six of the above provisions, so if the first two are crossed off, the roughly 13.5 million people enrolled in them would be in just as much danger of seeing their coverage turn to crap as the ~15 million or so on the individual market would.

As for the large group market, four of the six bullets above apply; the ones which don't are, according to Wesley Sanders, the list of 10 EHBs and the 60% minimum AV requirement (he says it actually does apply, sort of, but is calculated differently).

In other words, while repeal of the ACA wouldn't be quite as devastating to the Large Group Market as the Individual market, it would still be substantial:

Small groups would go back to underwriting so their rates would be more variable (lower for healthy, higher for sick). Pre-Ex for up to a year would return for those coming to ESI without prior continuous coverage.

The premium rating provisions wouldn’t be impacted, but the pre-ex protections of the ACA extended to large groups and I believe Sessions is arguing all of 42 USC 300gg should be invalidated which would include the large group protections

Sanders points out that thanks to HIPAA, there's some pre-existing condition coverage for people who maintain continuous coverage after leaving their employer (via COBRA or whatever), but the bottom line is that very few people are guaranteed to work at the same company until they turn 65, and there's plenty of people who will experience a gap in coverage for one reason or another.

Repeal the ACA (or substantial portions of it like the Guaranteed Issue and Community Rating rules, as are currently threatened by the idiotic #TexasFoldEm lawsuit which has been brought by...surprise! 20 Republican Attorneys General and Governors) and it's not just 15 million people at risk...it's about 2/3 of the country.

NoProvisions.com is a website run by a friend of mine. It focuses specifically on the employer market, and the impact of the ACA on it. I strongly invite those with Employer-Based Coverage to check it out and share their stories:

Today, 156 million Americans with insurance through their employers benefit from three little known provisions that were implemented when the ACA took effect in September 2010.

Before September 2010, millions of Americans who thought they were covered by their employers' insurance plans were denied insurance, denied treatment or forced to file for bankruptcy.

156 million Americans have employer sponsored insurance (ESI) but for some reason, most aren't at all afraid about how an ACA "Obamacare" repeal will impact them.