My Barton Fink Reference came true: Carriers want brokers kept in town but out of their sight 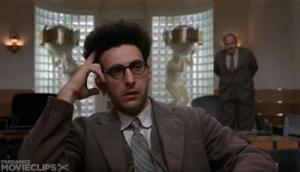 Regular readers know that although I do spend a lot of time updating this website, I do still have to do my day job running a website development firm. As a result, I'm simply not able to keep up with every healthcare-related hot tip which comes my way.

So, when the following link was forwarded to me a few days ago, while I did find out more details from the sender, I didn't happen to get around to actually posting anything about it before today:

Over the past few months, we've seen an acceleration of changes in the health insurance market. UnitedHealthcare is continually evaluating all aspects of the evolving exchanges so that we can provide coverage options that best meet consumers' health care and financial needs.

In response to market changes, it has become clear that we must adjust our commission schedules for our 2016 individual on-exchange business in certain states to better align with the demands of the marketplace. New schedules have been posted on E-Store. The commission changes will be effective for business received as of Tues. Nov. 17, 2015 and after.

...here's what "adjusting our commission schedule" supposedly means in practice for insurance brokers trying to help people enroll in policies for 2016:

Yesterday, only 2 weeks into OEP 2016, United Healthcare attempted to "shut off" enrollment by reducing agent commissions by up to 80% or more in most states. In addition, United removed quoting & enrollment functions for all marketplace plans through agent/broker portals. Apparently, United is seriously concerned about their exposure/losses/enrollment for 2016. This is a major blow to call centers and large web brokers such as Ehealth, who rely on United's broad FFM footprint to enroll business. I believe a lot of this is due to the reinsurance debacle. Also important to note that this is United's 2nd year on the FFM & they experienced some major technical glitches (mostly related to billing) during plan year 2015.

Some Guy, that same evening:

Not Just UHC: Has the Great Insurance Broker Purge begun??

The 2016 Federal Exchange has introduced many healthcare benefit options to the Arizona market. With the rate increases, benefit changes and plans exiting the market, many Arizonans are looking for affordable healthcare coverage. As a result of these market conditions, Phoenix Choice has experienced robust enrollment, more quickly than expected.

Going into OEP, Phoenix Health Plans set enrollment targets, including a goal for a substantial proportion of the enrollments to come through the broker channel. As of November 19th, 2015 that goal has been met. In order to continue to provide high quality health coverage at an affordable price and to sustain our market position, we must make changes to our sales strategy and commission model.

After much consideration, Phoenix Health Plans, Inc. has made a difficult decision to discontinue Phoenix Choice broker commissions for new Marketplace enrollments as of November 19th, 2015. We will pay commission and renewals in accordance with the agent agreement for all Phoenix Choice applications received on or before November 19th, 2015. This decision does not impact commission payment for any of our plans in other states.

Anyway, I have no idea whether this is connected with the UHC situation, but the "no more commissions!" part sure sounds like it's from the same playbook. Like the movie producer character at the end of Barton Fink who insists on keeping Fink under contract but refuses to actually produce anything he writes, the exchange carriers are saying that they want to participate in the exchange...without letting anyone actually enroll beyond a certain threshold.

Some Guy, a few days later:

Broker Purge: My question was rhetorical, but the answer appears to be "Yes".

ACA Navigators don't receive any commission, and are forbidden from recommending any particular insurance carrier over another; they're there to explain what all the lingo means, explain how different variables are likely to affect enrollees (higher deductibles vs. lower premiums; co-pays; out-of-network providers; etc etc) as well as explaining how the actual ACA exchanges work, how to go through the enrollment process, how the federal tax credits and Cost Sharing Reduction works and so forth.

[quoting Steven Warwick of HealthDecisions US:]

And finally, Jay Hancock of Kaiser Health News, this morning:

Stung by losses under the federal health law, major insurers are seeking to sharply limit how policies are sold to individuals in ways that consumer advocates say seem to discriminate against the sickest and could hold down future enrollment.

In recent days Anthem, Aetna and Cigna, all among the top five health insurers, told brokers they will stop paying them sales commissions to sign up most customers who qualify for new coverage outside the normal enrollment period, according to the companies and broker documents.

...Last year, these “special enrollment” clients were much more expensive than expected because lax enforcement allowed many who didn’t qualify to sign up, insurers said. Nearly a million special-enrollment customers selected plans in the first half of 2015, half of them after losing previous coverage.

In addition, Cigna and Humana, another big health insurer, have ceased paying brokers to sell many higher-benefit “gold” marketplace plans for individuals and families while continuing to pay commissions on more-profitable, lower-benefit “bronze” plans, according to documents and interviews.

...By inducing brokers to avoid high-cost members — whether in gold plans or special enrollment — the moves limit access to coverage and discriminate against those with greater medical needs, said Timothy Jost, a law professor at Washington and Lee University and an authority on the health law.

“The only explanation I can see for them doing this is risk avoidance — and that is discriminatory marketing and not permitted,” he said. “When people wonder why we’re not getting millions more enrollees in Affordable Care Act health plans, one reason is, the carriers are discouraging it.”

If insurers are telling brokers they won’t be paid for enrolling people in gold plans, “that to me is pretty discriminatory,” said Sabrina Corlette, research professor at Georgetown University’s Center on Health Insurance Reforms.

But in the end, it's none other than anti-ACA analyst Robert Laszewski who channeled my post (and especially Barton Fink):

What’s unclear is whether insurers intend to resume paying full commissions when open enrollment begins for 2017.

In its Monday letter to brokers, Anthem said it “remains committed” to individual and family insurance. United, however, said last year it might leave that businessaltogether — a drastic move because under federal law it couldn’t reenter for five years.

Few if any carriers want to go that far, said Laszewski.

“They can’t withdraw from the market,” he said. But by adjusting commissions, “they’re doing everything they can to slow it down until it gets fixed.”