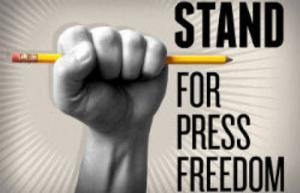 "Don't fall for it. The simple truth is: Yes, full-price, unsubsidized premiums for individual market healthcare policies probably have doubled since 2013...but that's primarily because they have to actually cover healthcare and carriers can no longer cherry-pick who they're sold to.

And of course, the blog entry that comes from is literally titled "New HHS ASPE report is likely 100% accurate...and mostly meaningless."

Pleased to make your acquaintence, Allison. I guess I should feel complimented that you at least visit the website, anyway...

Both my original full quote and the mangled, utterly out-of-context press release were referring to a report issued by the HHS Dept's. Assistant Secretary for Planning and Evaluation (ASPE), which claimed that average premiums for major medical insurance policies on the individual market had increased by 105% from 2013 (the last year before policies had to include ACA protections) through 2017.

The larger point I was making, of course, is that the major reason indy market premiums shot up so much was because the carriers were forced to add Guaranteed Issue and Community Rating to their policies in all states--protections which have now become locked in as being demanded by most of the public. Unsubsidized indy market rates during the same period in the 7 states which already included some form of GI/CR rules before the ACA went into effect showed a very different picture: Across five of them rates only went up about 24%, while if you include the two special cases (New York, which had GI and strict CR (zero age variance), and Massachusetts, which of course already had Romneycare in place), unsubsidized premiums appeared to actually belower than they were in 2013. I'm still a bit shaky about the Massachusetts averages, but the larger point remains.

Of course, as I noted over the course of the next few weeks, it turns out that the ASPE report in question, which I had originally given some benefit of the doubt, to turned out to be even more misleading than I had originally thought. The short version is that when you included all 50 states, the weighted average increase at full price (i.e., unsubsidized) only increased by about 84% nationally...still a lot, of course, but not 105%.

UPDATE: Of course, as I also noted in that link, when you include APTC subsidies, the average net premiums paid by individual market enrollees only went up about 13% between 2013 - 2017...and a chunk of that is due to normal, plain old inflation. The "105%" ASPE report makes a passing reference to the fact that their numbers don't include tax credits in a small footnote, when in fact the subsidies are a critical part of the entire ACA structure, just as they were in Massachusetts under Romneycare.

OK, so why am I bringing this up again today? Here's why:

The Centers for Medicare & Medicaid Services threatened to ban a reporter from participating in the federal agency’s telephone news conferences after he refused to delete three sentences from a published story that apparently had rankled CMS Administrator Seema Verma.

The reporter — Virgil Dickson, Washington bureau chief for Modern Healthcare — believed the agency was making good on its threat on Thursday when, he said, his phone went mute during a CMS press call and a woman’s voice told him he was not allowed to participate. An editor later confirmed with CMS officials that he had been banned from press calls, Dickson said.

...Dickson said he has received no communication from CMS assuring him of future access. Even if he is allowed to participate in future CMS press calls — already typically restricted to a handful of reporters — the attempt to alter a story by threatening to cut off access raises deep concerns among journalists.

The story goes on to detail what exactly ticked off Verma in the first place...

At issue was Dickson’s Jan. 23 story about the abrupt resignation of Brian Neale, an official who oversaw Medicaid and helped move it in more conservative direction.

After providing statements from Verma and Neale, Dickson quoted “industry insiders” who said the departure was prompted by “some sort of disagreement between Verma and Neale that erupted in the past few days.” He also mentioned that one source said Neale had been concerned about the workload. This information appeared more than halfway through the story.

After the article appeared, Dickson received an email from Brett O’Donnell, a communications contractor working for CMS. O’Donnell called reports of a disagreement or workload problems “false speculation” and said it was “irresponsible” to mention them without more details.

Dickson stood his ground, noting that the information came from multiple, reliable sources. But he agreed to speak with Neale for clarification, and subsequently added Neale’s denial of a disagreement.

Completely aside from the chilling pall this move by CMS casts over journalists in general, it really seems like an odd thing to get so worked up about. Either Neale did leave due to a disagreement with his boss/workload issues or he didn't. If he did, the story was accurate. If he didn't (that is, if Dickson's "multiple, reliable sources" turned out to be wrong after all)...I'm not sure I understand why that would cause such a negative reaction by Verma.

People leave their jobs over "disagreements with their boss" and "workload" all the time. I can't fathom why this would be such a major detail even if it wasn't accurate--it's like if he had mentioned that Neale was wearing a blue shirt at the time when it turned out to be green...OK, you got that detail wrong, but what difference does it make?

In any event, the HHS spokesperson had no problem completely butchering my quote to make it sound like I was supporting their assertion that the ACA sucks when in fact I was making the exact opposite point, but will ban reporters if they write (based on multiple reliable sources) that someone left the department due to "a disagreement and/or their workload".

It sure seems like the current HHS/CMS administration has a pretty disturbing view of how to deal with journalists. Remember, this isn't the first time something like this has happened under the Trump Administration...even within the HHS Department:

A reporter in West Virginia who was arrested four months ago after he aggressively questioned Tom Price, the secretary of the Department of Health and Human Services, will not be prosecuted, officials announced Wednesday.

The May 9 arrest of the reporter, Dan Heyman, had stoked concerns about possible efforts to stymie the free press.

In a joint statement released by the Kanawha County prosecutor’s office and Mr. Heyman’s legal team said that the State had determined “after a careful review” that Mr. Heyman had not acted unlawfully. He had been charged with a misdemeanor count of willful disruption of governmental processes.

Mr. Heyman, a reporter for the Public News Service, has maintained that he was simply asking questions of a federal official as that official walked through the West Virginia State Capitol. In another statement released Wednesday, Mr. Heyman said he was “very relieved” by the state’s decision.

“Facing six months of jail time for asking a question as a journalist was pretty troubling,” he said.

As Trudy Lieberman laid out in her story Under Trump, health reporters confront an information blockade at the Columbia Journalism Review last September, Trump's HHS Dept. seems to have a bit of an attitude problem when it comes to the press...

UPDATE: For full clarity/completeness sake, here's the full May 24, 2017 press release from Ms. Marre which took my quote completely out of context: 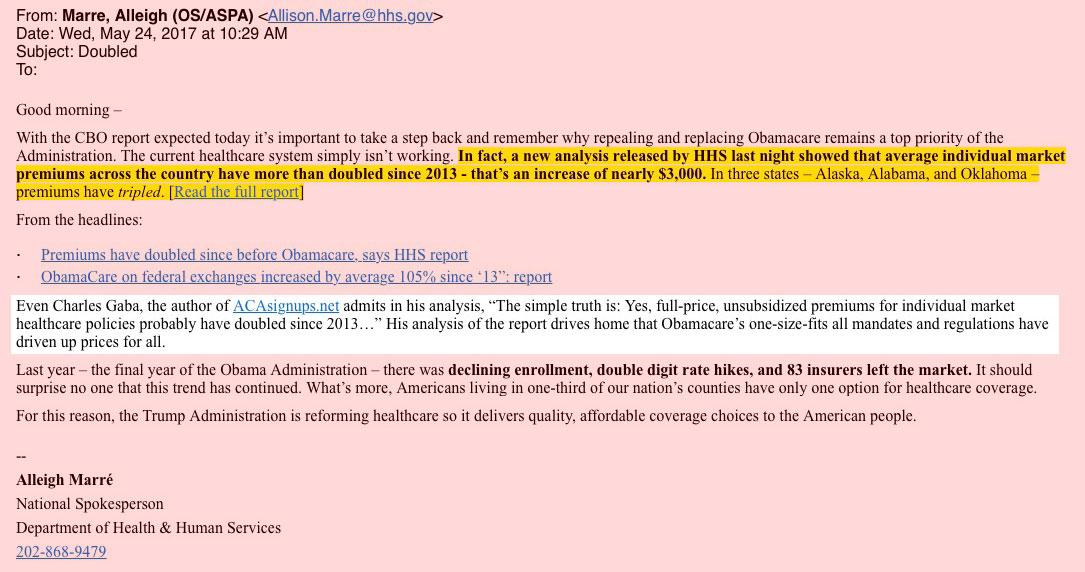