Every week during Open Enrollment, the Centers for Medicare & Medicaid Services (CMS) will release enrollment snapshots for the HealthCare.gov platform, which is used by the Federally-facilitated Exchanges, the State Partnership Exchanges, and some State-based Exchanges. These snapshots provide point-in-time estimates of weekly plan selections, call center activity, and visits to HealthCare.gov or CuidadoDeSalud.gov. 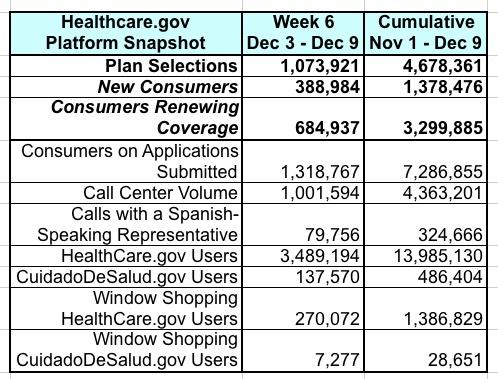 Total active renewals are 3.3 million to date, an increase of nearly 400,000 over last year. That's great news from a shop around/getting the best value perspective, but it also means there's that many fewer current enrollees left who could be renewed (either actively or automatically). Also note that the total pool of current enrollees is down around 400,000 from last year to begin with (HC.gov's 2017 enrollment was 500K fewer than 2016's, which likely translates to around 300K fewer currently enrolled today than last year).

Last year the total number of active renewals via HC.gov ended up being 4.56 million, plus another 1.63 million auto-renewals, or 6.2 million total renewing enrollees. Add on 3.01 million new enrollees and you get the 9.2 million total for 2017.

If you add those 2.6 million to the 4.7 million confirmed total HC.gov enrollees, that's around 7.3 million on the federal exchange by Friday night...plus however many new enrollees are added to the mix:

Some of this could potentially be cancelled out by stronger-than-expected performance on the 12 state-based exchanges. I'm "officially" projecting 2.5 million for them (vs. 3.0 million last year), but it's looking like the SBMs will end up higher than I thought--perhaps 2.7-2.8 million?

OK, what about the state-level breakout? Here's what that looks like through December 9th for the 39 HC.gov states (along with the confirmed enrollment numbers for the other 12 states, which run through varying dates). First, a comparison against the same date last year (as close as possible--every state is within 1-3 days): 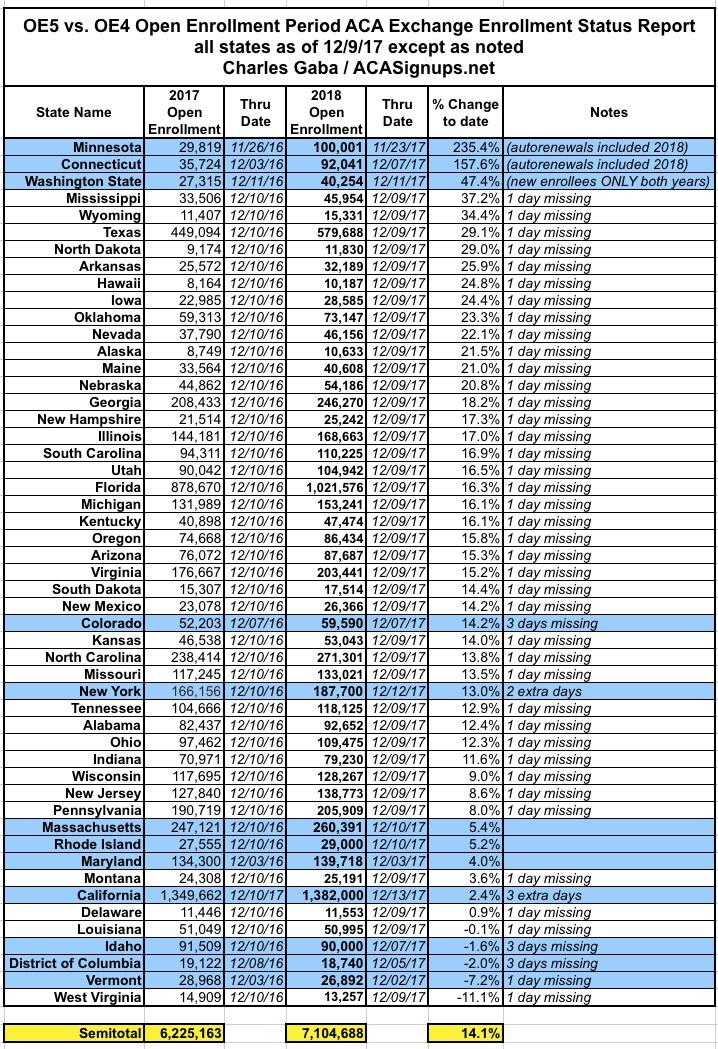 The states have been sorted from highest to lowest. As you can see, the confirmed grand total is just shy of 7.0 million nationally just over 7.1 million nationally with 6 days to go in most states. This compares to 6.15 million at roughly the same point last year (13.4% higher).

If you disregard the special circumstance states at the top (MN & CT started front-loading their auto-renewals this year, while I only have mid-year numbers for new enrollees in both years), red states are in the lead, with Mississippi, Wyoming, Texas, North Dakota and Arkansas each still over 25% ahead of last year's numbers.

At the bottom of the list, 6 states are now slightly behind last year, but 3 of them (CA, ID and DC) are all missing 3 days of data, which can make a big difference. The other three are Louisiana, Vermont and especially West Virginia, which is now down over 11% year over year, presumably due to their "Broad CSR Load" policy (but perhaps not?).

Next, here's how each state is doing as a percentage of last year's TOTAL enrollment: 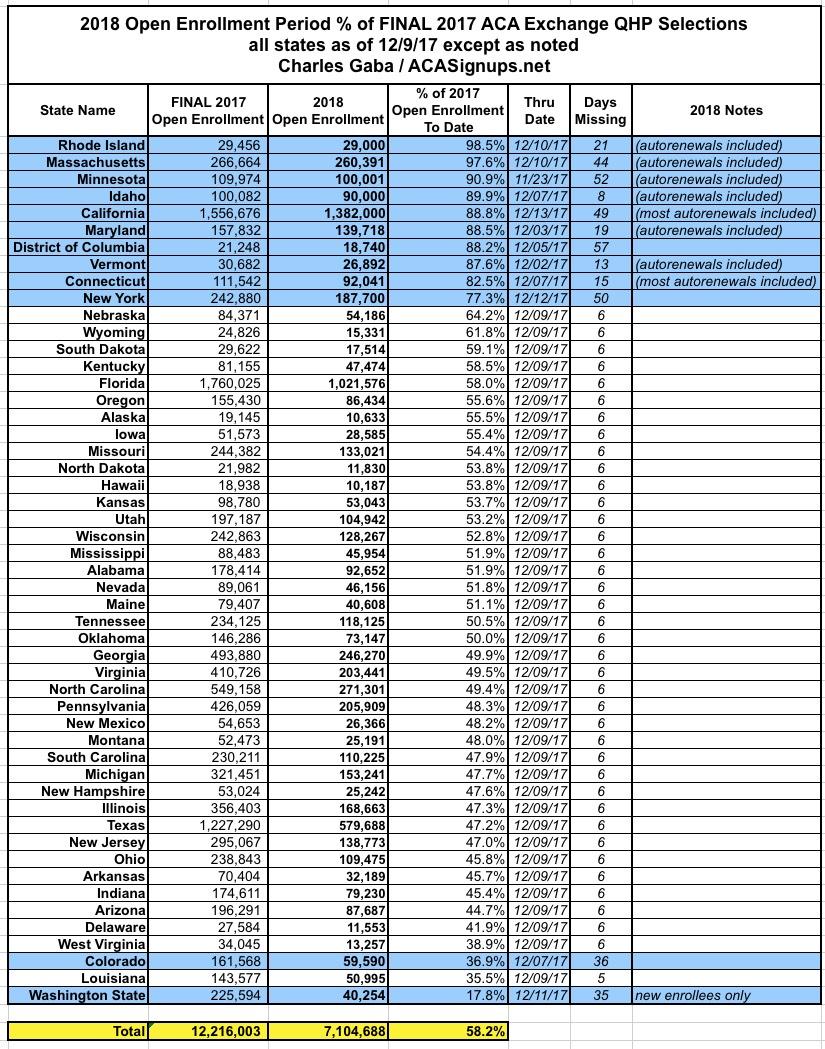 Nationally, confirmed enrollments have reached 7.0 7.1 million people, or 58% of last year's final tally, with the critical final week still missing (and far more than that for some of the SBMs).

At the state level, most of the SBMs have reached more than 80% of their OE4 numbers, but that's mainly because of auto-renewals being front-loaded in many of them. If you disregard those states, New York and DC are at the top of the list (and DC is missing a week's worth of data.

This is rather surprising to me, I admit, for two reasons:

In other words, neither the District of Columbia nor New York State have their exchange enrollment impacted by either the shortened enrollment period or the CSR cut-off.

It would be easy to jump to a conclusion about the significance of this, but I won't know that for sure until the dust settles after January 31st. I'll keep this point in the back of my head, however.

For the HC.gov states, again, the top spots are held by red states, with Nebraska, Wyoming, South Dakota and Kentucky each having reached over 58% of their OE4 numbers as of 12/09. At the bottom of the pack are West Virginia, Colorado and Louisiana, although Colorado has an extended enrollment deadline. I'm disregarding Washington State since they've only released new enrollment data so far.

Anyway, there you have it: 7 million confirmed ACA exchange nationally enrollments so far, although I estimate that it was probably more like 7.2 million as of Saturday night.

Now it's all about The Surge®. 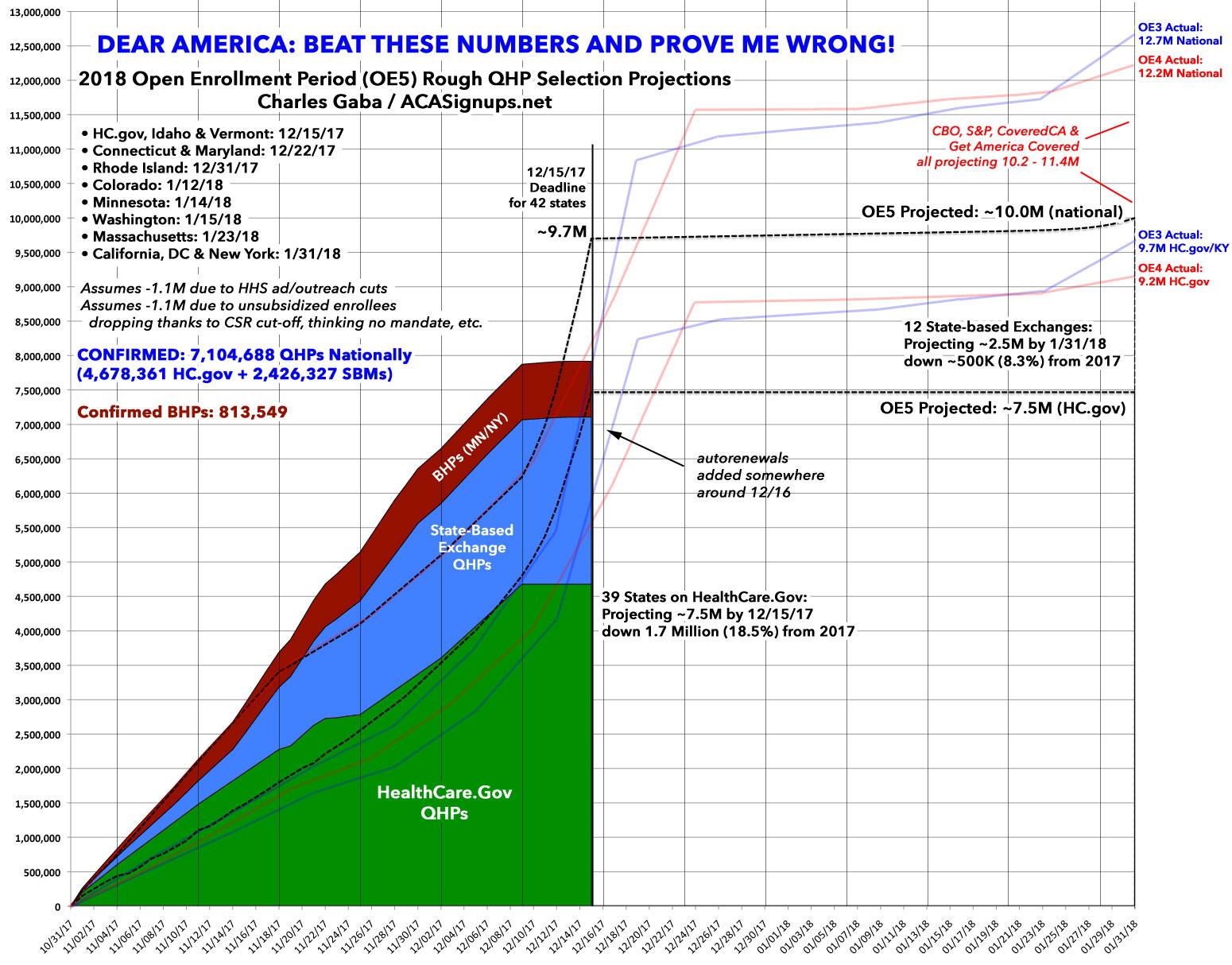