Alaska: Sen. Murkowski has some valid arguments but misses the larger point 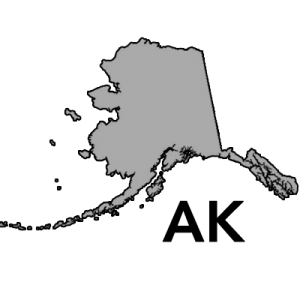 (h/t to nmbrmnstr via Twitter for the heads up)

As part of their Godawful "tax reform" bill, Congressional Republicans have decided to toss repealing of the ACA's individual mandate penalty into the mix, partly because they've always hated it but mainly because doing so would allegedly save the federal government $338 billion over the next decade...which in theory would be enough to keep the total increase in the federal deficit bythe tax bill below the $1.5 TRILLION mark (yes, you read that correctly: $1.5 TRILLION, with a "T").

It's my understanding that if they can't keep it below that threshold, the bill won't go through for some obscure Senate rule reason or another (although apparently White House budget director Mick Mulvaney also stated that they really don't give a crap whether the mandate is repealed or not as long as the larger bill gets passed, so perhaps I'm mistaken about this? Need clarification on this point...)

In any event, needless to say, there's been much heated debate about repealing the mandate, as well as the consequences of doing so. Politically, the GOP can only afford to lose 3 Senators (remember, VP Mike Pence can act as a tie-breaker if necessary), so once again all eyes have fallen on GOP Senators Susan Collins of Maine, Lisa Murkowski of Alaska, John McCain of Arizona and a handful of others.

This evening, Sen. Murkowski authored an OpEd in the Anchorage Daily News in which she tries to explain her rationale for wanting to scrap the mandate. She actually has some valid points, but misses the forest for the trees...and, I should note, is simply factually wrong about two of her claims (although one of them doesn't really matter that much).

Let's get those factual errors out of the way first. In the fourth paragraph, Sen. Murkowski states:

Alaskans pay the highest price for premiums in the country; that is why the number of people enrolled on the exchange in Alaska has shrunk every year since the ACA was passed. People have been forced out of the market by the high cost of insurance, with some often forced to pay a tax because the price of insurance was too high for them to afford.

The bold-faced statement is, quite simply, wrong. Here's the official number of ACA exchange enrollees in each of the 4 Open Enrollment Periods to date since HealthCare.Gov launched in October 2013:

It's possible that Murkowski is looking at March effectuation numbers for each year, which might show a drop-off from 2015 to 2016 as well, I suppose. Anyway, as I said, this is a fairly minor point which I just wanted to correct since it goes directly to the core mission of this website.

As for the rest of her OpEd, she starts out giving high praise to the ACA's accomplishments...

The ACA has helped many people in our state, and across the country. There is no question about that. Some people have been able to buy insurance for the first time in their life, mental health and substance abuse coverage is more accessible now, and insurers cannot arbitrarily deny coverage to those with pre-existing conditions. I do not support taking care away from these people...

...before getting to the heart of the matter:

...but there are many for whom this law has not helped. It is important to emphasize that eliminating this tax penalty does not take care away from anyone. Instead, it provides important relief to those who have been penalized for choosing not to buy unaffordable insurance.

She goes on to note the sky-high prices for unsubsidized enrollees (yes, Alaska's reinsurance program has improved this dramatically for 2018 by lowering unsubsidized premiums 22%, but they were already absurdly high to begin with), and then notes that people who refuse to pay will be subjected to the mandate penalty ($695/adult + $348/child or 2.5% of their household income).

This brings me to the other factual error, and this one is more relevant:

Alaskans pay the highest price for premiums in the country...

A silver plan for a family of four, with a $9,000 deductible, will cost about $2,160 per month in 2018. If this family does not qualify for the advanced premium tax credits, they face the choice of paying almost $35,000 in 2018 just for health insurance premiums, before their insurance really kicks in, or potentially paying a tax of $695 or 2.5% of their income. An individual could be paying around $709 per month for a plan with a $3,000 deductible. With no tax credits, that person would pay over $11,500 per year before insurance starts to help, or pay the tax for not having coverage.

OK, first of all, she's playing a little fast & loose with the deductible--the cost to this family in premiums (which is what she's supposedly focusing on throughout the rest of the article) is $26,000, not $35,000. She throws in the "...before their insurance 'really' kicks in" caveat to justify the $35K figure. OK, yes, it's damned expensive either way, I agree.

However, as Anne Paulson reminds me in the comments below, the claim that "Alaskans pay the highest price for premiums in the country" may be true in 2017...but is simply not true in 2018. Alaska's reinsurance program means average rates are dropping 22% next year, while unsubsidized premiums in other states are going up by an average of around 30%...resulting in Alaska dropping to 4th highest nationally in 2018 no matter how you slice it, according to the Kaiser Family Foundation: 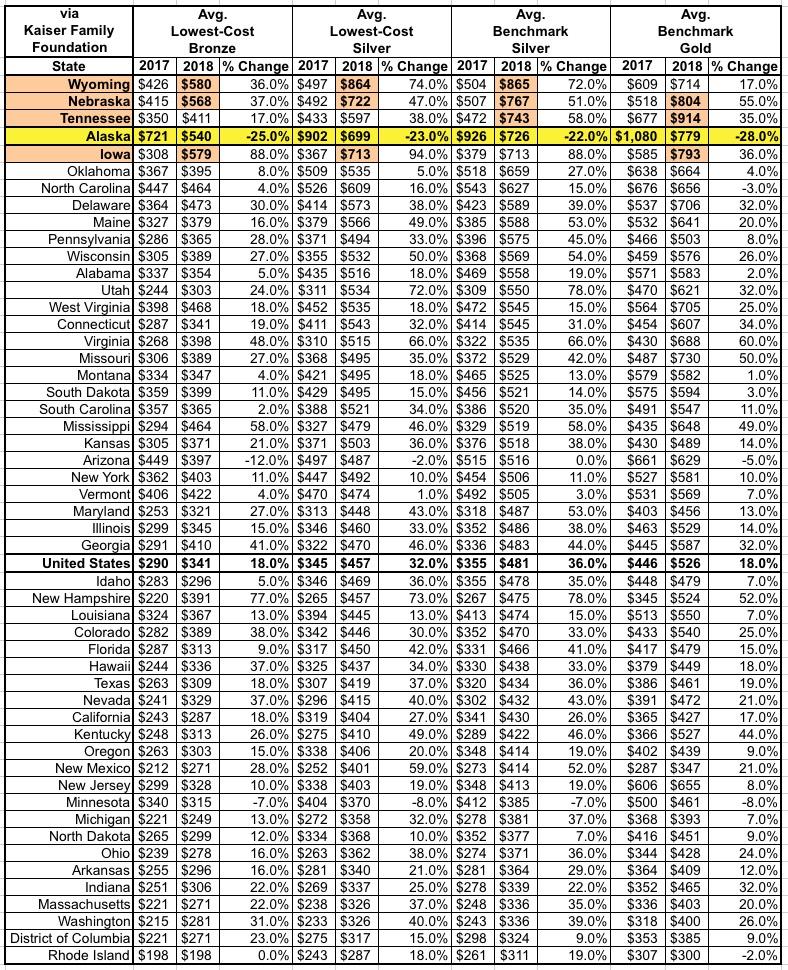 Granted, this isn't something to cheer about too much since a big reason for Alaska's position dropping is the increase in rates in Wyoming, Nebraska and Tennessee, but the point still stands: Effective January 1, 2018, Alaska will not have the highest premiums in the country.

I'm not going to nitpick about the exact figures she chooses; it's possible that she's cherrypicking her example to make it worse than it is, and of course the ACA's hardship exemptions from the penalty is available for some people. Her overall point here is valid, though: For unsubsidized enrollees on ACA-compliant individual market policies, the cost is just too damned high in much of the country. I agree with this 100%.

Of course, the great irony here is that the major reasons for the 30% average premium spike in other states are Donald Trump cutting off CSR payments...along with insurance carriers just being concerned about the individual mandate being repealed in the first place.

HOWEVER, eliminating the mandate penalty, especially in the absence of other significant stabilization efforts, would just make that problem worse.

Yes, if you currently get tax credits, you could still receive those credits. That's true. But again, those aren't (for the most part) the people who are suffering under the current situation; it's the people who aren't receiving tax credits who are hurting. Repealing the mandate wouldn't help a single Alaskan (or resident of any other state) enroll in a health insurance policy...and in fact would raise rates for those policies even further, putting them even farther out of reach.

To her credit, Murkowski does end on a positive note, promoting the Alexander/Murray stabilization bill, which I'm generally in favor of...

Protecting the gains we've made with provisions of the ACA while providing greater control to states and options for individuals is why I have been working for bipartisan solutions to the health care challenges we face. Instead of taxing people for not being able to afford coverage, we should be working to reduce costs and provide options. That is precisely what the bipartisan legislation introduced by Sen. Lamar Alexander, R-Tenn., and Sen. Patty Murray, D-Wash., which I have cosponsored, achieves. While I support repealing the individual mandate, I strongly support enacting the bipartisan compromise Alexander/Murray into law as fast as possible to stabilize our markets, provide more control to states and more choices to individuals.

...but all this would really do is to reverse who's currently being helped and hurt--premiums for unsubsidized enrollees in Alaska would drop by a further 5 percentage points or so...but only for two years, and that would likely be cancelled out by the impact of the mandate repeal anyway. Meanwhile, premiums for subsidized enrollees would actually jump up by a few points as their "bonus" subsidies were reduced back to "normal" levels.

If Sen. Murkowski really wants to help individual market enrollees earning more than 400% of the Federal Poverty Line without harming anyone below that threshold, as she says she does, there's a simple solution to that: Senate Bill 1307, introduced by 7 Senators back in June:

A BILL To amend the Internal Revenue Code of 1986 to expand eligibility to receive refundable tax credits for coverage under a qualified health plan.

This Act may be cited as the “Affordable Health Insurance for the Middle Class Act”.

SEC. 2. EXPANSION OF ELIGIBILITY FOR REFUNDABLE CREDITS FOR COVERAGE UNDER QUALIFIED HEALTH PLANS.

(c) Effective Date.—The amendments made by this section shall apply to taxable years beginning after the date of the enactment of this Act.

BOOM. Problem solved. No Alaskan on the ACA exchange would have to pay more than 9.6% of their household income for a fully ACA-compliant Silver plan no matter what their income is.

This would be done without lowering the subsidies for existing enrollees, without killing the mandate, without disrupting the market further, and with Democratic support.

In fact, how about trying this on for size: How about if the GOP gets to repeal the mandate in return for removing the 400% APTC cap!

If the GOP is correct that the mandate is merely an unnecessary burden which isn't effective anyway, then no one would drop their coverage, right? And at the same time, millions of currently unsubsidized enrollees would suddenly become subsidized, and therefore able to afford to enroll in a comprehensive healthcare policy without breaking the bank. Win-win!

And if they want to throw Alexander-Murray into the mix on top of this, that'd be fine with me as well.