A visual guide to why early enrollment numbers can be deceiving

At first glance, the graph below strongly resembles the Pictured Rocks National Lakeshore attraction in Munising, Michigan, which my family visited over the summer. It's truly gorgeous.

However, what you're looking at is, in fact, a visual breakout of the state-by-state proportions of total Qualified Health Plan selections on the ACA exchange throughout the 2017 Open Enrollment Period, which ran from Nov. 1, 2016 - Jan. 31, 2017. The data comes from the official Public Use Files from the Centers for Medicare and Medicaid. As you can see, most states follow a fairly obvious trend because 39 of them are run through the federal exchange at HealthCare.Gov.

Since all 39 are administered, entered into the system and reported the same way, the only variances between them are their relative population size: Large states are thicker, small states are thinner throughout the entire enrollment period as you'd expect.

HOWEVER, there are 12 states (including two of the largest, California and New York) which operate their own ACA exchanges...and some of them handle their enrollment order, process and reporting quite differently from the rest of the country. This results in some skewing of the numbers early on, making drawing early conclusions difficult.

In addition, remember that for 2017, the Open Enrollment Period was a full 3 months for all 50 states (+DC). A few may have had slightly later interim deadlines (December 23rd for January coverage instead of December 15th, for instance), but otherwise their end dates were pretty much the same. In 2018, however, 42 states have their final deadline on December 15th...but the remaining 9 states have extended their deadlines anywhere from one to six weeks later, with California, New York and DC maintaining the prior Jan. 31st cut-off. This makes predicting the overall flow of 2018 enrollments even more difficult, since there's always a final enrollment surge just ahead of the deadline for every state.

The states are in reverse alphabetical order. Most of the areas are too thin to label easily, but I've added state names to eight of the larger HC.gov-based ones to give a sense of proportion. I've also labelled eight of the state-based exchanges in blue. The missing four (CO, CT, DC & VT) are either too small to see or follow the same reporting pattern as HC.gov, so aren't really relevant here.

The blue state exchanges each have something unusual going on which distorts the first half of the graph:

The point of all this is that yes, it's extremely encouraging to see such a massive groundswell of enrollees in the first week, and yes, this suggests that the final totals will likely be better than my initial, gloomy 10M total projection (~7.5M on HC.gov, ~2.5M on the state exchanges)...but there's still way too much noise in the early few weeks to get a sense of where things are headed. I hope my projections end up laughably pessimistic, believe me, however. 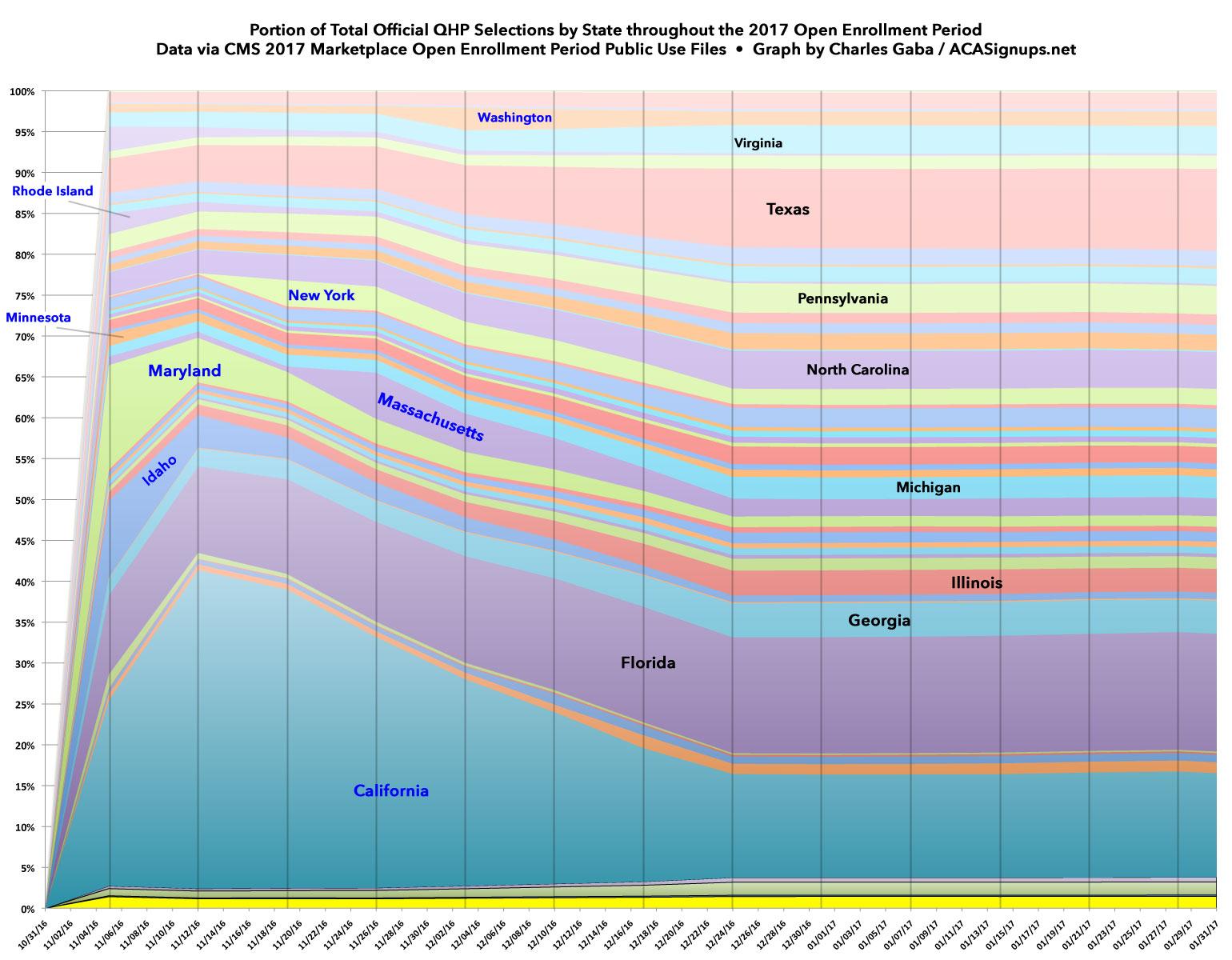