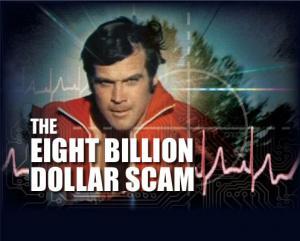 Back in January, I wrote a long rant about High Risk Pools. The general thrust was that in theory HRPs aren't necessarily a horrible idea; on paper they can be made to work...assuming the math adds up and they're properly funded on a permanent basis.

However, I also pointed out that due to the very nature of HRPs (i.e., segregating out a small, highly vulnerable group of people from the rest of society), it's incredibly easy for legislators not to properly fund or maintain them, especially after the initial funding comes up for renewal.

However, just out of curiosity, I did a little back-of-the envelope math to see just what sort of dollar figures would be required in order to properly fund a HRP which would serve those in the individual market. First, I used this study by the Kaiser Family Foundation, which found that about 5% of the population accounts for a full 50% of healthcare spending; the other 95% accounts for the remaining 50%.

As I noted in January:

Now, Ryan himself admits that 8% of people under 65 have "the same type" of pre-existing condition that the questioner has...in other words, batshit-expensive ailments like cancer/etc. 8% of 30 million is 2.4 million people. If it costs $10 billion per year for 875K, that's a good $27.5 billion per year for 2.4 million of them. That's eleven times as much as Ryan's plan is promising.*

Now, here’s the thing: Ryan claims that state-based high risk pools have “worked well”. Perhaps…IF they're properly funded. If Ryan and the rest of the Republicans move the decimal point to the right by a notch, perhaps we can talk.

Even a cursory glance at the math suggests that you'd need at least $28 billion/year to take care of this population properly. But that was just my offhand math. A 2014 Commonwealth Fund study suggested that it would be far more:

Covering the majority of uninsured Americans with pre-existing conditions through a national high risk pool would cost an estimated $178 billion a year, according to a 2014 Commonwealth Fund report.

Now, the Commonwealth study was referring to covering “the majority of uninsured americans", which (at the time) was more like 45-50 million people. In this case we're only talking about 30 million, so let's lop that down by 40% and call it $106 billion. Hell, let's cut it down to an even $100 billion. Per year. To cover "most" of those with pre-existing conditions.

Now, you can certainly argue that the Commonwealth numbers are insane, but it sure sounds like we're looking at anywhere between $27 - $100 billion per year just for these 2.4 million people. The point is, it's orders of magnitude higher than Ryan's $2.5 billion.

The other day,, Topher Spiro of the Center for American Progress did his own back-of-the-envelope math on this:

1: Since there’s no CBO score (!), we did some basic math on Trumpcare’s funding for high-risk pools. IT DOES NOT ADD UP.

3: Assume that only 5% of enrollees have pre-existing conditions that would price them out of the insurance market.

4: This is *really* conservative given that 27% of non-elderly Americans have very serious pre-existing conditions. https://t.co/omd41DCRMu

5: The 5% would translate to 1.5 million enrollees who would be quarantined into high-risk pools.

7: Assume that high-risk pools provide the same quality of coverage as ACA exchange coverage and subsidize the same share of costs.

8: Applying these assumptions to the average claims cost, the average subsidy would need to be $21,000 per person per year.

Note that he assumes only 1.5 million people in this category vs. my 2.4 million, yet the total amount needed would be far higher.

OK, so that brings us to today.

Until now, as Spiro noted, the amount allocated by the AHCA towards potential HRPs is around $130 billion ($115 billion for the "state stability fund"; $15 billion for the "invisible risk pool", whatever the hell that is). It's important to note that this money isn't even guaranteed to go into HRPs; that's just one of the ways it would be allowed to be used by the states. Still, since we have no clue which states would theoretically establish one and which wouldn't, we have to assume, for the moment, that the entire amount would indeed go towards high risk pools.

Now, again, you can certainly quibble about the exact dollar amounts or the exact number of people who would have to be covered, but note this:

AHCA would still be below that, even with this new money.

So let's call the range anywhere from a bare minimum of $200 Billion to as high as $1.0 Trillion over a decade.

And what "new money" is Scott referring to? This:

Top House Republicans scrambling to prevent another collapse of their push to repeal much of President Barack Obama's health care law may have found a way to win over some moderate GOP holdouts.

A respected authority on health care, Upton said the proposal would provide $8 billion over five years to help some people with pre-existing medical conditions pay costly insurance premiums. It comes with many moderates opposing the high-priority legislation, even as GOP leaders press holdouts to back it and push it through the House before the chamber begins a week-long recess scheduled to start Friday.

That would bring the grand total up to...$138 billion total over a decade. Again, even the most absurdly GOP-friendly estimates say this would still fall short...and more realistic numbers suggest that it'd still be underfunded by at least 50%.

Earlier Tuesday, several Republicans said leaders were considering adding money to fund high-risk pools or other mechanisms for helping states ease costs for people with pre-existing illnesses, who are expensive to cover. There's already around $130 billion in the legislation for such assistance, which critics call a fraction of what would be needed for adequate coverage.

I should also note, as Spiro did this morning, that "adequate coverage" itself is a bit misleading as well:

Again, per my January article, here's what he's referring to:

...A small number of states capped or closed enrollment to limit program costs, though enrollment caps were not allowed for HIPAA-eligible individuals. Limiting enrollment, directly or indirectly, was a key strategy to limit the cost of high-risk pools to states. By design, all state high-risk pools experienced net losses – that is, expenses greater than premium revenue.

But hey, they'd receive "access" to coverage "to some degree or another".

In short, don't fall for the $8 Billion Scam. Keep calling today at 866-426-2631. You can also use the Trumpcare Toolkit to contact targeted members of Congress directly.

UPDATE: Oh for Pete's sake...read this by David Anderson of Balloon Juice:

The Upton Amendment is out. It is $8 billion dollars to pay for the late enrollment penalty of people in states who elect to waive non-underwritten guarantee issue so that these people don’t get dropped into the high cost risk pool.

What the hell does that mean? Well, remember that the AHCA would replace Obamacare's $695/year individual mandate penalty for not being covered...with a 30% surcharge for getting covered after a previous break in coverage. Apparently Upton's amendment would pay that 30% penalty for those people, completely defeating the point of having the penalty.

Upton makes a complete hash of any personal responsibility and anti-free rider logic ever advanced in the bill. This is a mess.

When I titled this "The $8 Billion Scam", I was mostly looking for an excuse to use the cute "$6 Million Man" graphic. That is, I originally thought that it was "only" a scam in the sense that $8 Billion isn't nearly enough money to properly cover the number of people with pre-existing conditions it purports to.

HOWEVER, now that the actual language has finally been released (less than 24 hours before it's supposed to be voted on, I should add...so much for "transparency" and "Democrats rammed it down our throats" complaints), it looks very much like even the $8 billion itself is also a scam, in at least two ways.

First of all, I asked a few people today how the funding allocation works. After all, in theory up to all 50 states could request a pre-existing/community rating waiver which would require high risk pools for that $8 billion, right? But not every state will do so...some will, some won't, and the populations involved will vary widely. What happens if only, say, Wyoming (total population: 586,000) were to do so? Does the lowest-population state get the entire $8 billion?? What a windfall, especially since they'd likely only haver perhaps 20,000 people with pre-existing conditions on the entire individual market! That'd be $400,000 apiece! I assumed there was some sort of per-capita formula which would put a cap on how much each state could receive.

Well, no one seemed to know the answer...and now that I've seen the actual text, it turns out that the answers is...there is no formula whatsoever. Apparently HHS Secretary Tom Price can dole out the money however the heck he wants to:

Amendment drafted to H.R. 1628, as amended by self-executing amendments adopted by Rules Committee and Amendment offered by Mr. MacArthur

Add at the end of the section 2202 proposed to be added to the Social Security Act by section 132, the following:

‘‘(c) REQUIRED USE OF ADDITIONAL INCREASE TO CERTAIN WAIVER STATES TO PROVIDE FINANCIAL HARDSHIP ASSISTANCE.—A State shall use the additional allocation provided to the State from the funds appropriated under the last sentence of section 2204(a) only in accordance with such last sentence.

Insert at the end of the section 2204(a) proposed to be added to the Social Security Act by section 132, the following:

‘‘The amount otherwise appropriated under this subsection shall be increased by $8,000,000,000 for the period beginning with 2018 and ending with 2023, to be allocated to States with a waiver in effect under section 5 2701(b) of the Public Health Service Act with respect to the purpose described in paragraph (1)(C) of such section, in accordance with an allocation methodology specified by the Secretary that takes into account the relative allocation of other amounts appropriated under this subsection 10 among such States, and to be used by (and made available under subsection (d), for any year during such period that such waiver is in effect, to) such States for the purpose of providing assistance to reduce premiums or other out-of-pocket costs of individuals who are subject to an increase in the monthly premium rate for health insurance coverage as a result of such waiver.

That's it. That's the entire amendment.

Now, the ACA itself does already grant quite a bit of authoritative leeway to the HHS Secretary when it comes to deciding how to administer the law, which served Sylvia Burwell quite well when trying to deal with an obstructionist Congress, and which already grants Tom Price a similar amount of clout when it comes to bogging down or sabotaging the law. However, this may be along the same lines as that. I'm really not sure.

However, as former CMS Administrator Andy Slavitt just noted moments ago, there's a related issue which is far more disturbing:

This $8B targeted to take care of ppl w pre-existing conditions . . .

doesn't have to be used for ppl w pre-existing conditions. 4

The number of times the words "pre-existing conditions" are used in the bill . . . Is ZERO. 5

Meanwhile, someone please count the times the words "pre-existing conditions" are in the GOP secretly obtained talking points. 6 pic.twitter.com/wAzcGVrDxw

These are part of a longer thread; here's the other key points he makes:

People who vote for this won't have had time to read it. Let alone analyze it. But I will best I can so there can be no EXCUSES tomorrow.7

First of all, high risk pools are terrible and at best provide 2nd tier coverage. In his case underfunded to about 30,000 ppl nationally.8

Second, it's not enough money. And as @AislingMcDL points out in her feed, Fred Upton knows that. 9

3rd, states only get the money if they CUT essential benefits & pre-ex. An incentive 2 cut. And the money goes from taxpayers 2 insurers.10

And now-- the kicker. The $ can go to subsidize healthy people anyway. 11