Now that I've managed to catch up with the "big picture" data dump from today's APSE Enrollment Report at both the national and state levels, it's time to dig into the meat of the report: Demographic Breakdown!

I'm not going to get into everything here, of course; a lot of this stuff is beyond my pay grade (which is to say, zilch, as I'm not paid to operate this site), while other stats just aren't of any particular interest to me, though obviously they may be useful to others. I'm mostly just running through all 81 pages (27 in the main report, 54 in the state-level supplemental) to see what catches my eye.

This entry will focus purely on the main report; I'll look at the supplemental report (which goes into state-level data) tomorrow.

Within the Marketplaces as a whole (all 50 states +DC):

Note: The grand total was actually up to 11.38 million as of a week later (122,000 higher than this report shows). Virtually all of the additional 122K are newly enrolled, so it's more like 8.2 million renewals to 3.1 million new enrollees. From now through 1/31, practically all additional enrollees should be new, with a small number of exceptions such as those who were cut off from their Co-Op plans when the carriers went belly up but who haven't found alternate coverage yet. These people actually have until March 1st to find a new policy due to the 60-day Special Enrollment Period exception for people who's coverage was lost when it wasn't their fault.

However, both of these numbers should improve by the end of Open Enrollment, since younger folks tend to hold off until the last minute to sign up (not just the December deadline, mind you: The final deadline on 1/31). Consider 2014: 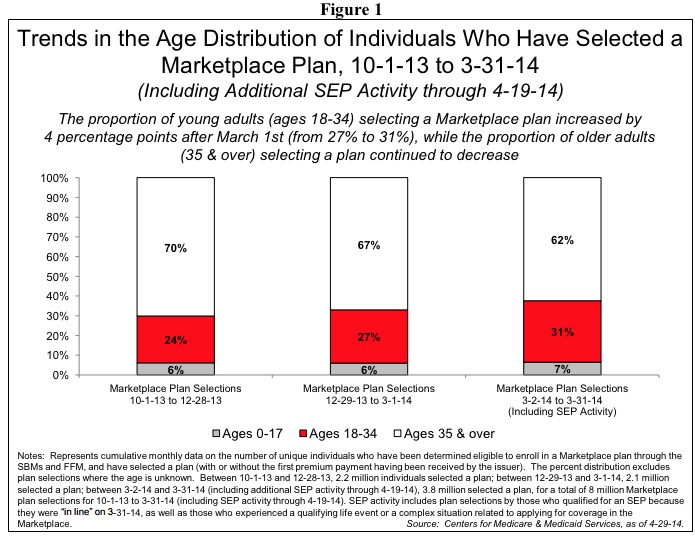 If so, that would bring the total up to:

It's really just a question of whether that "Final Deadline Surge" is a) large enough and b) includes a higher enough percentage of "Young Invincibles" to bump the average up a couple of points.

The discrepancy between the HC.gov and SBM states here is kind of interesting. Over 60% of HC.gov renewals were active, versus only 27% of SBM renewals. I'm guessing the main reason is because 3 of the 11 Co-Ops which failed (thus forcing their enrollees to shop around) were located in SBM states (Colorado, Kentucky and New York), and those three happened to have substantial enrollment numbers. There could be other reasons as well, however.

Within the HealthCare.gov states:

That's pretty impressive: 60% of 60%, which means that 36% of all active HC.gov enrollees switched plans. Unfortunately they don't include similar data for the state-based exchanges.

The next table goes back into the age brackets again (remember that this is only for the HC.gov states; the SBMs could have some variances:

Here you can see that when you combine active and auto-renewals, only 24.5% of all HC.gov renewals were in the 18-34 bracket...while fully 31% of new enrollees to date have been 18-34. As noted above, as long as the January enrollees continue to hit 31% Young Invincibles (and the total number is large enough), the total percentage should nudge about a point or so above last year.

The same table goes into all sorts of other demographics (ethnicity, gender, etc, which isn't really of concern to me here).

This is kind of interesting, as it's a reminder that being under 400% FPL does not guarantee that you'll receive tax credits (remember, 18% aren't receiving financial assistance, but only 3% are over 400% FPL, so there's an additional 15% who are under 400% but don't qualify for credits for whatever reason).

UPDATE: thanks to Andrew Sprung for noting that fully 8% of the HC.gov enrollees don't have any known income level listed, so the numbers are a bit different. More from him on this subject here.