UPDATE: Coming Soon: The Return of the King... v. Burwell??? 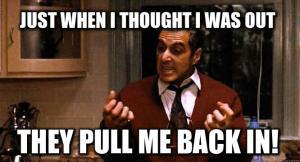 (sigh) Just when you thought it was safe to go back in the risk pool...

Now that the dumbest lawsuit ever to make it to the United States Supreme Court has been kicked to the curb, you might think that it's smooth sailing for the Affordable Care Act, at least legislatively-speaking. You would, of course, be wrong:

The Obama administration and House Republicans are clashing over the healthcare law in court, with the Justice Department blasting a GOP lawsuit as "unprecedented."

House Republicans are suing President Obama over what they call executive overreach, saying Obama is unconstitutionally spending money on an ObamaCare program Congress declined to appropriate money for.

The Obama administration counters it does not need an appropriation because the funds were made permanent and mandatory by the Affordable Care Act. The funds in question are for “cost-sharing reductions” that help insurers lower out-of-pocket costs for low-income people.

The lawsuit raises questions about the separation of powers, with the administration accusing the House of trying to bring the courts into a political dispute between two other branches.

Here's the basics of the case, thanks to Timothy Jost:

The federal District of Columbia district court is currently considering the government’s motion to dismiss in House v. Burwell. This lawsuit, brought by the House of Representatives, challenges as illegal the administration’s payment of cost-sharing reduction payments to insurers without an explicit appropriation, as well as its delay in the effective date of the employer mandate.

Were the House to succeed in this claim, the consequences would be nearly as devastating as those that could follow from King v. Burwell. Nearly 60 percent of enrollees in qualified health plans through the marketplaces are the beneficiaries of cost-sharing reduction payments, which make health care as well as health insurance affordable by reducing deductibles, coinsurance, copayments, and out-of-pocket limits for lower-income enrollees. The government has asked the court to dismiss this case for lack of jurisdiction, as under Supreme Court precedent members of Congress do not have standing to sue to enforce federal laws. The court has held one hearing on this motion and has asked for further briefs and documents.

* UPDATE: I've been informed by JJ Gomez via Twitter that even if it does make it to the SCOTUS, it would likely take longer than that; the appeals process alone apparently takes over a year, so it probably wouldn't show up there until after the next President is inaugurated, so...

The difference this makes can be striking. Let's say that my wife, son and I happened to have a household income of $30,000/year here in Oakland County, Michigan. Our APTC subsidy would be $437/month, meaning that we could get a Bronze plan from Blue Cross Blue Shield of Michigan without having to pay a dime in premiums, which is awesome!

Unfortunately, that plan would also come with a whopping $11,900 deductible, which means I'd have to shell out nearly $12K before the policy would cover a dime of my expenses. Even after that (not that a family with just $30K in total annual income would be able to pony up 40% of that for healthcare expenses anyway), we'd have to pay $30 or $50 co-pays for doctor visits, etc. The only saving grace is that our total expenses would be capped at $12,700, which is small comfort in that scenario. 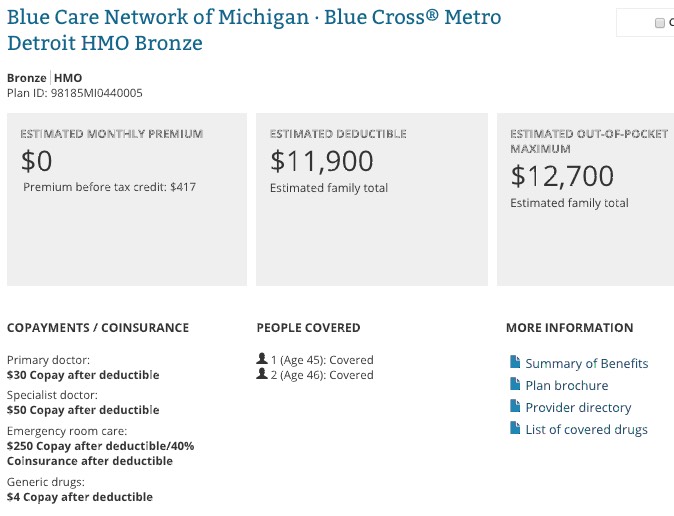 But what if I upgraded to a Silver plan instead? Logic would dictate that this should cost more, since it covers 70% of post-deductible expenses vs. 60% and has a lower deductible, right? Well, without Cost Sharing Reduction (ie, with APTC only), it would look like this: 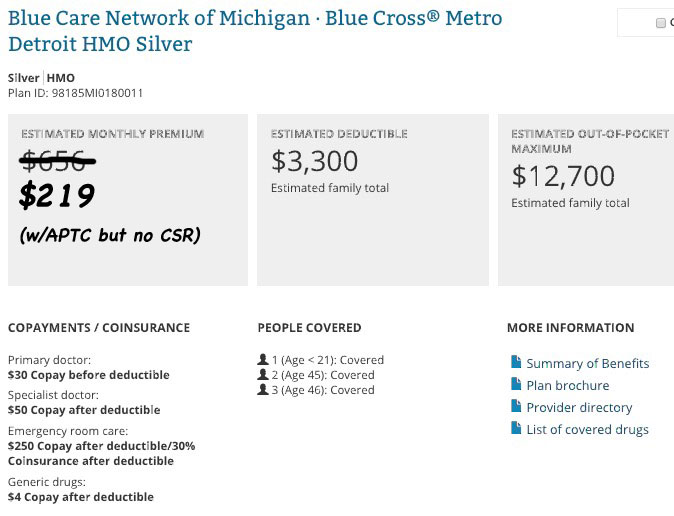 Without CSR, this would be a judgment call for the family in question...the deductible would be a whopping $8,600 lower per year and they'd be covered at 70% vs. 60%...but they'd also have to shell out $219/month (versus zilch), which is still a pretty big burden on a family of 3 only bringing in around $2,500/month to begin with.

HOWEVER, look what happens when you add CSR into the mix: 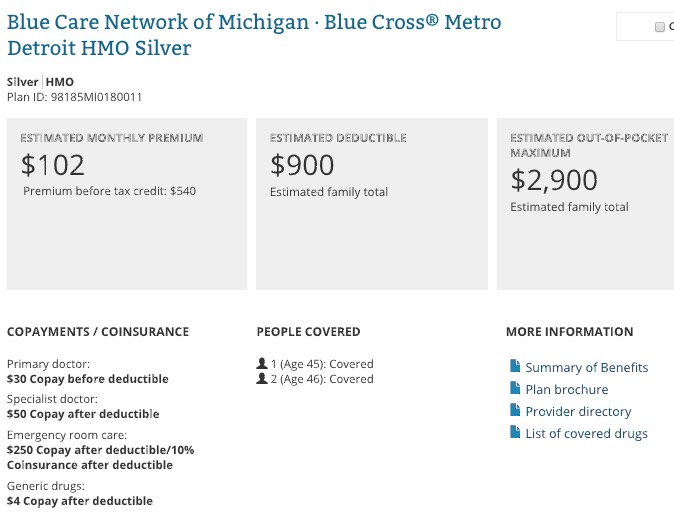 THAT'S more like it. They'd have to come up with $102/month for the premiums, but check out their deductible and maximum out of pocket total: Just $900 and $2,900 respectively.

The Silver/CSR solution may not be the best solution for everyone, even within the 100-250% FPL range; it depends on your specific situation, income, location, the company, network and plan that you're looking at. However, in most cases this can be as much of a (literal) lifesaver as the APTC assistance.

Unlike King v. Burwell, which "only" would have directly injured 6.5 million people across 34 states, if successful, this lawsuit would threaten CSR assistance for millions of enrollees in every state. However, due to the lower income range eligible for CSR (up to 250% FPL vs. 400%) and the limitation to Silver plans (vs. every metal level), the actual number of people impacted would still be lower: Around 5.85 million people as of March (likely slightly higher now...perhaps 5.9 million as of today).

Then again, assuming it does end up snaking it's way up to the SCOTUS by next spring or summer, and assuming total exchange enrollment increases from the current 10.3 million by, say, 20% to around 12.4 million or so, that number could be as high as 7.1 million people by then.

Even worse, in King v. Burwell, you could at least plausibly argue that a small portion of the 6.5 million directly impacted (perhaps a few hundred thousand at the upper end of the subsidy range) wouldn't have been directly hit too badly, since they're receiving much smaller credits against (relatively) larger incomes. If the CSR assistance is removed, pretty much everyone impacted would be seriously screwed, since it's only available to people making less than 250% FPL anyway.

UPDATE x2 7/4/15: Thanks to commentors Robert and BXC for noting this overview of the House v. Burwell case over at Slate, which suggests that even if this one does manage to make it to (and through) the Supreme Court, it may end up being just another big waste of time for the Republicans even if they win:

There are several reasons this lawsuit could amount to a lot of noise, and not much else. First, it's not clear yet that the House actually has the legal standing to sue the administration. It needs to show that, somehow, its own members were harmed by the administration's decision to pay out the subsidies. And while you could say that ignoring the dictates of Congress damages the institution, typically, the courts don't relish the idea of refereeing political disputes between the other two branches of government. If the House loses on that score, the suit is done.

But even if they win the right to argue their case, the House Republicans' argument might be a lot more feeble than it looks, as David Super, a Georgetown University law professor, explained to me. By passing the Affordable Care Act and instructing the administration to pay insurers their subsidies, Super said, Congress effectively appropriated the funds to do it. "The Supreme Court has been very clear that you do not have to have a law that says 'appropriations' across the top. You just need a law directing that the money be spent," he said.

But there are even deeper reasons the case might not in fact be a very effective weapon against Obamacare. If the administration did lose at court, insurers would still be entitled to their subsidy payments under the law. Therefore, they could simply file their own suit against the federal government at the Court of Federal Claims and collect the money owed to them.

In addition to these, I'll note a fourth political point: With King v. Burwell, the Repubican Party could at least try to claim (as implausible as it was) that they had nothing whatsoever to do with the case; after all, technically speaking it was a private citizen named David King whose name was listed as the plaintiff, and the funding/paperwork was actually provided by the CATO Institute, which isn't officially the Republican Party (hah!).

This time around, however, it's the Republicans themselves whose names are on the lawsuit. There would be no conceivable way of them to try and play innocent if they were to "win" this time around.

Anyway, hopefully this one will end up petering out before it ever gets to that point, and avoid wasting everyone's time, energy and sanity again...