10% of the country is now enrolled in ACA-enabled healthcare coverage. 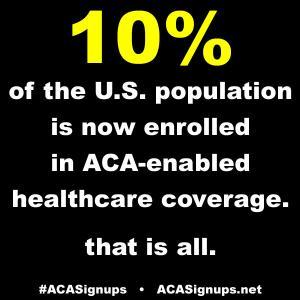 Yesterday I noted that a seemingly minor announcement (HHS tweeting that the final #ACATaxTime tally for the federal exchange from 3/15 - 4/30 ended up being 147,000 people) had a greater significance than that, because tacking that onto the grand national total brought the official tally up to the 12 million milestone.

Personally, this didn't mean much to me because I estimate that the actual total (including unreported numbers from various exchanges) is more like 12.4 million or higher anyway...and on the flip side, the number of people actually paid up with effectuated enrollments is more like 10.1 million, and has been for a month or so now. Still, officially hitting the 12 million mark seemed worth noting, so I did so.

Reporter Philip Bump of the Washington Post's "The Fix" also thought this was noteworthy; he called me up, we talked a bit and this morning he posted a pretty good roundup of the numbers we discussed:

For the first time, the number of people who have signed up for a health-care plan under the Affordable Care Act has reached 12 million, according to Charles Gaba of ACAsignups.net. The milestone is significant largely because it ends in six zeroes. But it's significant for a political reason, too: It means that 3.7 percent of the country has selected a plan in the politically contentious system.

It's a good overview, and Bump correctly notes that when you add the 10.1 million effectuated enrollees to the 12.4 million newly-added Medicaid/CHIP enrollees, you get 22.5 million people fully enrolled in ACA-enabled healthcare plans, or around 7% of the 318 million people in the United States.

That's pretty impressive...except that Bump forgot to include 2 additional numbers (in his defense, the second one never came up in our conversation): Off-exchange ACA-compliant policy enrollees, and SHOP (small business exchange) enrollees.

As for the SHOP enrollments (at least 300,000 people nationally by my rough estimates), those are very much ACA-specific, though they haven’t gotten much press.

Finally, while he does include 12.4 million Medicaid/CHIP enrollees, he left off the additional 950,000 people who were moved onto Medicaid from existing state-funded healthcare programs between 2010 - 2013 (ie, prior to ACA expansion). This, again, is a judgment call since it's really more of a shift from one public program to another than anything. Include these and it's 13.4 million ACA-specific Medicaid/CHIP.

In any event, if you add all three of these into the mix, you get: