BREAKING: 46% of Republicans (& to be fair, 25% of everyone else) has completely lost touch w/reality

A few days ago, YouGov.com posted the results of their own survey about the ACA, which showed pretty much exactly the same results as both the Bloomberg News and Kaiser Family Foundation polls released last week: Obamacare still isn't exactly beloved, but acceptance/approval of the law has been gradually (if grudgingly) increasing ever since the ugly rollout of the ACA exchanges a year and a half ago: 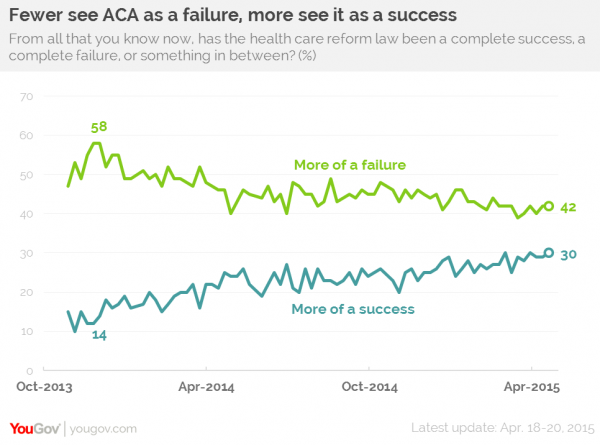 I didn't bother posting about this poll because it seemed a bit redundant; all 3 surveys asked questions in different ways, but the results are pretty consistent across the board.

However, thanks to Jim Drake for bringing to my attention this post by Jonathan Cohn and Mark Blumenthal over at the Huffington Post, which looks at the more #FacePalm-inducing responses to a different question:

But the most revealing part of the YouGov poll was a more specific question about how people perceive the Affordable Care Act’s performance -- specifically, whether respondents think the number of people with insurance has increased, remained the same, or fallen over the last 12 months. 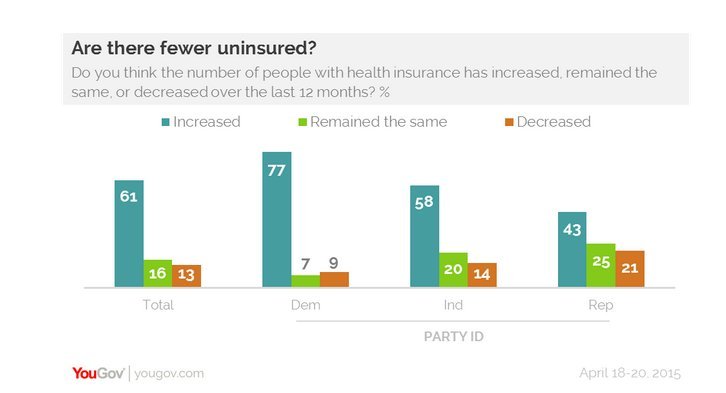 Gallup says the uninsured rate has dropped from 18% to 11.9%? Doesn't matter.

The Urban Institute says the uninsured rate has dropped by 30%? Doesn't matter.

The Congressional Budget Office says 12 million more people had insurance as of the end of 2014? Doesn't matter.

Now, to be fair, about 13% of Democrats/Independents (combined) think the insured rate hasn't changed, and 12% of Dems/Indys are also utterly detached from reality as well, and I'm reading them the riot act just as fiercely as I am to 46% of the GOP.

If anything, I should be even more furious with the 16% of Democrats who are this clueless. I expect today's Republican to be completely ignorant of anything having to do with the Affordable Care Act, but I expect more out of Democrats.

On the other hand, this certainly helps explain some of the other results from YouGov as well as Bloomberg and KFF. Overall, 29% of the public has their information dead wrong...which just happens to match up perfectly with the 29% who are crying REPEAL! over at the Kaiser survey and very close to the 35% in Bloomberg's study.