UPDATED: Could it be?? More former Obamacare opponents singing a different tune now...even in Appalachia!

Last week a self-described "Tea Party Patriot" and "Lifelong Republican" named James Webb posted a video which went viral because he was openly stating that he "might" actually vote for Hillary Clinton next year specifically because he's afraid of a Republican president doing exactly what the GOP has been trying to do for 5 years now: Repeal the Affordable Care Act.

Earlier I posted about a new Bloomberg News poll which shows that only 35% of the population wants to repeal the ACA, while 63% want to either keep it as is or give it a few years to see how it goes with only minor tweaks.

And today, there's a story in USA Today which shows that the tide may finally be turning, even in areas where President Obama himself is considered toxic: Appalachia:

Last year, fast-food worker Melinda Watson echoed the law's unpopularity here — convinced it would kill jobs and create long waits for "horrible" socialized medicine. She bought a subsidized insurance plan on the state exchange only to avoid paying federal penalties. But she soon realized the benefits: going to the doctor regularly and undergoing MRIs for her epilepsy. Her employer didn't cut her hours, as she feared.

"I was really scared at first, with all the gossip," said the 41-year-old granddaughter of a coal miner, slicing tomatoes in the back of a sub shop. "But it's really helped. I've seen a lot of other people who got insurance actually using it, going to the doctor and getting their teeth fixed. Now I've got the opposite fear — that when (President Obama) goes out of office, they'll take it away."

Anyone noticing a trend here?

Don't get me wrong--the USA Today article is not all sweetness and light for the ACA. It goes on to document some of the areas where the law is still causing some issues, and the change of heart is hardly across the board.

Even so, I suspect you can expect more and more stories from folks like Mr. Webb and Ms. Watson to start popping up over the next year or so.

This is exactly what Democrats were hoping would happen about a year ago, before the 2014 election; it looks like it took a bit longer than expected, but apparently it's finally starting to dawn on some people that the ACA hasn't caused the earth to open up and swallow the nation, but instead may actually be, you know, not so bad a thing after all.

UPDATE: As I noted in my update to the Bloomberg News poll entry, the Kaiser Family Foundation has also released their latest monthly tracking poll, and the results support the anecdotal points I've made above: The ACA isn't beloved, but support is definitely tracking upwards, slowly but surely.

While the KFF trend lines date back to the ACA being signed into law back in 2010, I'm more concerned with how people have felt about it since October 2013, when the health insurance exchanges were actually launched. Not only was the the splashiest, most visible part of the law's implementation, it's also important because the ACA's image was hurt badly by the botched technical rollouts and has had to claw it's way back ever since.

Fortunately, that seems to be exactly what's happened. Below, I've zoomed in on just the post-exchange launch period, and have removed everything except for the actual approval rating to make things clearer: 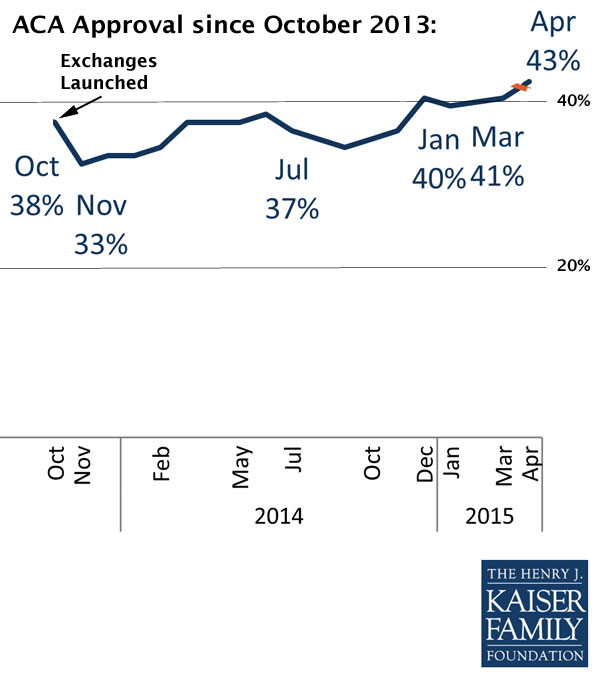 It's slow and steady, but the trend is obvious: After plummeting from October to November 2013 due to the technical mess surrounding the exchange launch, approval has gradually inched it's way up to this month's 43% approval rating nationally.