Just a quickie reminder: If you live in Connecticut, didn't #GetCovered during Open Enrollment and had to pay a non-coverage fee for 2014, starting tomorrow you can join 46 other states (+DC) in the Tax Filing Season Special Enrollment Period:

Who can sign up?
The special enrollment period is for people who are uninsured now, have not had coverage at all in 2015, paid a tax penalty for not having coverage last year, and didn’t find out about that penalty until they did their taxes.

People in that situation can sign up for private insurance plans through Access Health CT, the state’s health insurance exchange, from April 1 through April 30. (People who qualify for Medicaid can sign up at any point in the year.)

Including Connecticut, 45 states (+DC) are cutting off the #ACATaxTime SEP on 4/30. Washington State is cutting things off on 4/17, while Vermont is bumping it out all the way through May 31st.

The remaining 3 states (Colorado, Idaho and Massachusetts) aren't offering any special tax season enrollment period at all, although they (like every other state) are still open for qualifying life event enrollments (getting married/divorced, giving birth, moving to a new state, losing other coverage, etc). 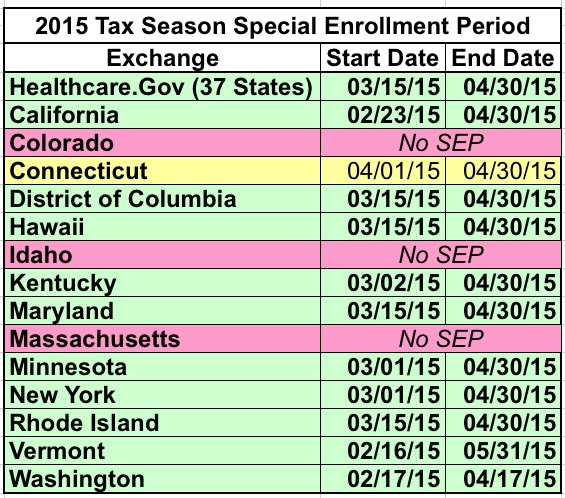