As I noted at the end of April, after climbing at a furious pace every week for months on end, Michigan's implementation of the Affordable Care Act's Medicaid expansion provision (aka "Healthy Michigan") plateaued at around 600,000 enrollees back in February, and then bobbled around the 600K level for several weeks straight. As I noted at the time, I'm still checking this figure weekly, but it has never deviated far from that number--sometimes a bit higher, sometimes lower.

As of June 30th, it stood at 606,779. 600K seems to be the level that ACA Medicaid expansion can be expected to stay at for the forseeable future.

Michigan: What's up with my home state re. King v. Burwell?

So, with all the fuss & bother over the imminent King v. Burwell decision, what's the deal here in the Wolverine state?

Well, first of all, here's what's at risk if the Supreme Court rules for the plaintiffs, Congress fails to pass a simple tweaking of the law to resolve the issue and the state administration fails to "establish" an exchange which passes muster with regard to the minimum legal definition required: 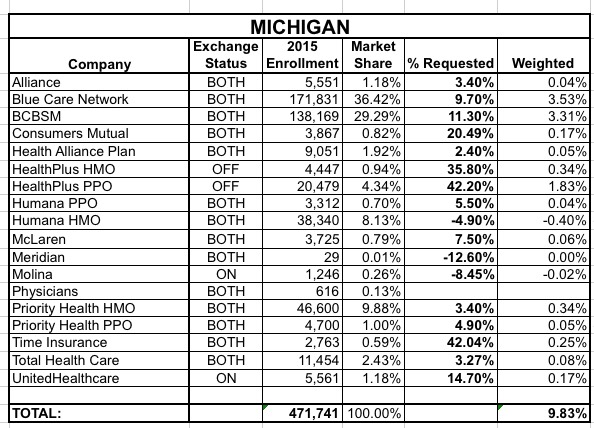 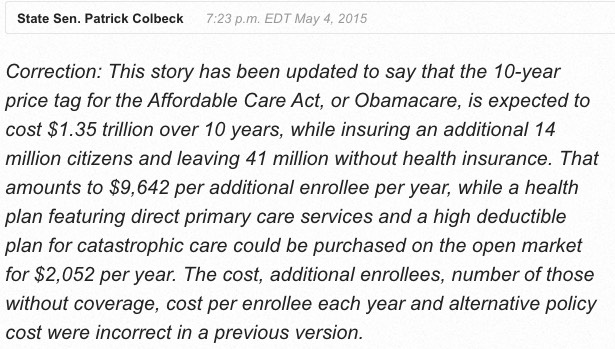 After months of never-ending growth, "Healthy Michigan", aka MI's implementation of the Affordable Care Act's Medicaid expansion provision, has officially stabilized at around 600,000 enrollees:

The reason it's bobbling around the 600K mark, of course, is because of normal "churn" as people move onto/off of the program as they gain/lose jobs, move into/out of the state, give birth/lose family members and so forth.

Michigan: Detroit News does the right thing but still has to take digs at Obamacare

A few weeks ago, the Detroit News posted a story gushing praise all over Michigan's implementation of the Affordable Care Act's Medicaid expansion provision, known locally as "Healthy Michigan", and somehow managed to not mention the ACA once until the 9th paragraph...and even then, failed to explain the connection between the two (as in, HM only exists because of ACA).

A couple of days ago, the editiorial board of the News posted an editorial which correctly calls for the renewal of Healthy Michigan, which requires a federal waiver once a year (I think) in order to continue because it includes modifications from simply increasing the eligibility threshold to 138% of the Federal Poverty Level.

Michigan: ACA Medicaid expansion FINALLY tapped out: Drops back down to 573K

For months now, Michigan's implementation of the Affordable Care Act's Medicaid expansion provision has defied expectations, enrolling far more than the 477K - 500K expected. A couple of weeks ago it managed to break the 600,000 mark, peaking at 603,681 people, and I've been wondering for quite awhile when the growth might finally stop.

The answer appears to be, "the first week of April":

Check out this story from the Detroit News about the success of Michigan's implementation of the Medicaid expansion provision of the Affordable Care Act, aka "Healthy Michigan":

Detroit — On the eve of the first anniversary of the Healthy Michigan Plan, Gov. Rick Snyder said Tuesday more than 603,000 Michiganians have enrolled since the expanded Medicaid Program launched on April 1, 2014.

Mazel Tov!! Over 600,000 Michiganders enrolled in a program enabled by and paid for by Obamacare! I'm sure they'll mention that in the 2nd paragraph, right?

The number exceeds by more than 100,000 people the two-year enrollment projections made prior to the program’s launch. The Healthy Michigan Plan provides health insurance to low-income working people for a minimal cost.

OK...maybe not. Perhaps the third paragraph?

And there we have it: The "Healthy Michigan" program, the Wolverine State's implementation of ACA Medicaid expansion, has broken the 600,000 enrollee mark:

At this point, I've stopped even trying to come up with cutesy headlines. Michigan's ACA expansion program, for which supposedly only 477,000 people were supposedly eligible, now claims that over 588,000 Michiganders have enrolled in the program:

As I noted the other day, there may be a plausible explanation for this:

I have a ton of ACA-related stories cluttering up my in-box again; here's some of the more interesting ones, all regarding ACA Medicaid Expansion:

For months now, I've been a bit obsessed with figuring out how my home state's Medicaid expansion enrollment has managed to reach as high as 21% more people than were supposedly even eligible for the program. Estimates last year ranged from 477,000 - 500,000, yet enrollment in Healthy Michigan (Gov. Snyder's name for Obamacare Medicaid Expansion) currently sits at a whopping 579K, less than 1 year into the program.

Michigan: "ACA Medicaid Expansion begins to learn at a geometric rate. It becomes self-aware at 2:14 a.m..."

Yup, Michigan's ACA Medicaid expansion is still continuing to grow, although it does seem to be slowing down at last:

Again, for the record, the prior estimates of how many Michiganders are even eligible for the program ranged from 477K - 500K. We're 16 - 21% above that now.

Back in December, I noted that Michigan's implementation of the ACA's Medicaid expansion provision had achieved an impressive 99.4% of it's theoretical maximum enrollment. Official state administration estimates pegged the number of Michiganders eligible for the program at around 477,000, and as of 12/08/14, enrollment had hit 474K.

Other estimates had Michigan's eligible population as being higher--perhaps 500,000, so I didn't think too much of it at the time. Besides, population shifts, changes in the economy and so forth could mean that an estimate from last spring had shifted up or down a bit.

Even so, as the official enrollment total broke 500K, then 510K, then 530K, I noted each increase, with increasing curiosity about the discrepancy.