Three types of stupid in 60 seconds. 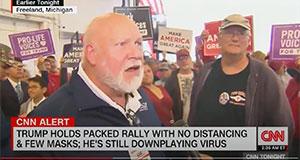 Around 5,500 Trump supporters showed up at an aircraft hanger in Freeland, Michigan (Saginaw County) to hear Donald Trump speak. The almost entirely white crowd may have been outside, but they were tightly packed and few were wearing masks. CNN's Jim Acosta (who did wear a mask properly, over both his nose and mouth) interviewed some of the attendees to ask why they weren't doing so, and the responses are...quite telling (click thru for the actual video):

Acosta: "Why are you guys not wearing masks?"

First Guy: "I have one with me...it's my prerogative."

Acosta: "But why not wear one to stay safe?"

First Guy: "I have a hard time understanding people when they talk, so that's why I don't wear one."

Acosta: "But you can hear me right now?"

The first interviewee apparently thinks you're supposed to wear a facemask over your ears, not your mouth and nose. Seriously, his point is that wearing a mask does tend to slightly muffle people's voices, thus making it difficult for him to hear other people when they wear a mask...except that he then says that he can hear Acosta (who is speaking in a normal tone of voice with loud music blaring in the background) just fine, completely negating his "justification".

More to the point, this guy isn't calling COVID-19 a "hoax" or "overblown"...he obviously has some concerns about it or he wouldn't have brought a mask at all. He just seems to be under the impression that a virus is only a threat when there's no one else nearby who he wants to have a conversation with...when, in fact, that's actually when he (or the other person) is most at risk.

Acosta: "Sir, can you tell me, why are you not wearing a mask?"

Second Guy: "Because there's no COVID. It's a...it's a fake pandemic, created to destroy the United States of America."

Acosta: "But the President said to Bob Woodward that there is a virus, the Coronavirus, and that it is deadly."

Ah. This is the classic "QAnon" mass delusional type of Trumpster. First he says COVID-19 doesn't exist at all, that it's a hoax (a lie perpetuated by Donald Trump last spring). Then, when confronted by the revelation a few days ago that Donald Trump openly admitted back in February that yes, the COVID-19 pandemic is very real and very deadly (before going on to publicly call it a hoax in March), this MAGA poster child shows how far gone down the rabbit hole he is: Trump has done such a good job of screwing up his brain that he doesn't even believe Trump when Trump himself contradicts the very delusion which Trump instilled in him in the first place.

Immediately after that, of course, he falsely claims that fewer than 10,000 people have died of COVID-19 (which means he just admitted that yes, it's real and deadly) and that the other 190,000 who've died of COVID-19 actually died from some other "mortality".

Of course that's not what the CDC said at all:

Last week, data from the Centers for Disease Control and Prevention (CDC) revealed that only 6% of people who died of COVID-19 actually have COVID-19 on their death certificate. This has led to accusations that the agency has “back-pedalled” on the number of deaths caused by COVID-19.

The conspiracy theory spread over the weekend, with “Only 6%” trending widely on Twitter. Even President Trump jumped on board, retweeting the suggestion that the CDC had updated its records to show that only 6% of US deaths linked to COVID-19 were genuine.

The original post from "Mel Q” was copied from someone else's Facebook post, which claimed that the CDC had "quietly" updated its numbers "to admit that only 6%" of people listed as coronavirus deaths "actually died from Covid," since "the other 94% had 2-3 other serious illnesses." It was later taken down by Twitter for violating rules of the platform.

The truth is, the data was part of the CDC’s latest regular update to a public statistics page on the pandemic—and it wasn’t published any “quieter” than normal.

...“Many clinicians will list the physiologic process which caused death,” says Dr. Braunstein. “For example, 55,000 of the death certificates had ‘respiratory failure’ listed as cause of death—we know that this is one of the most common mechanisms by which COVID-19 leads to death. We also know that in over 160,000 of the 180,000-plus deaths caused by COVID-19 in the US, COVID-19 was one of the diagnoses that was listed on the death certificate, and was felt to be the trigger for mortality.”

The CDC has never hidden the fact that pre-existing health conditions can cause people to experience serious complications from COVID-19.

If you look beyond the 6%, you’ll learn that as of August 22, there were 161,392 death certificates that listed COVID-19 as a cause of death. And if you do the math, you’ll see that in 94% of deaths with COVID-19, other conditions are listed in addition to COVID-19, including chronic conditions like diabetes or hypertension as well as acute conditions that occurred as a result of COVID-19, such as pneumonia or respiratory failure.

If a hurricane causes a tree branch to fall on your head and kill you, the official cause of death will likely be listed as "brain hemmorhage caused by blunt object" or something like that, not "hurricane"...but your death was still caused by the hurricane. If someone dies after being shot with an AR-15, the "cause of death" may technically be "massive amount of blood loss due to tissue perforation" or whatever...but they were still shot to death.

Moving on to the third interviewee:

Acosta: "Does it worry you guys at all to be in this crowded space with all these people?"

Third Guy: "I'm not afraid. The Good Lord takes care of me. If I die...I die! We gotta get this country moving. We can't...what're ya gonna do, wear masks and stay inside for another year? Huh? Where'll that get us?"

Welp. I at least give this guy a point or two for honesty: He believes COVID-19 is real, and he believes it's deadly. He just doesn't give a shit. And as the first guy said above, that's his prerogative.

The problem here is that he also doesn't give a shit about anyone else. If he gets infected, he's likely to infect numerous other people around him. Case in point, this August 7th wedding in Maine:

At least 147 Covid-19 cases are now linked to an August wedding reception in Maine, a state CDC spokesman said Saturday.

Three people connected to the outbreak have died of the virus, Maine Center for Disease Control and Prevention spokesman Robert Long told CNN.

The wedding was held in Millinocket on August 7. Since then, the cases have spread to a nursing home and a prison, both more than 100 miles away from the venue.

The state had 4,667 cases of coronavirus and 134 deaths through Friday, according to the Maine Covid-19 website.

As an aside, the irony here is palpable: I attempted to upload the video clip above to YouTube (so that I could embed it directly into this blog post)...and it was almost immediately flagged and removed by YouTube. Not for copyright violations, but because...

On the one hand, this is one of the problems with algorithm programs...they can't tell when something is being posted ironically or not. On the other hand, I'd rather YouTube err on the side of viewers not grasping that the crap being spouted in this clip is incorrect​​​​​​​, so fair enough.