FOLLOW-UP: How many would likely #GetCovered in YOUR HC.gov state via a #COVID19-specific SEP? 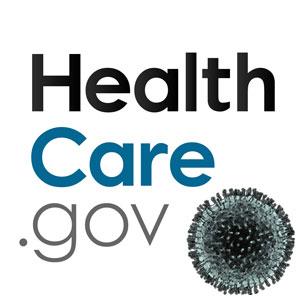 Yesterday I ran an exclusive analysis based on existing COVID-19 Special Enrollment Period (SEP) data to figure out a) roughly how many Americans are likely to enroll in ACA exchange coverage using this SEP in the twelve states offering one, and b) how many additional Americans would likely #GetCovered via ACA exchange policies in the other 39 states which don't currently have a CV19 SEP in place.

As I've explained before, while pretty much anyone who loses their employer-based health insurance is automatically eligible for a normal 60-day Special Enrollment Period regardless of what state they live in, under the current pandemic/mass layoff situation, the standard "loss of coverage" SEP is a red tape nightmare under Trump Administration regulations since you have to provide hard-to-get documentation of your status and have it verified by CMS, which can take weeks.

Some of the millions of newly-uninsured living in HealthCare.Gov states will no doubt utilize the standard "coverage loss" SEP regardless (historically, I estimate around 3,300 people gain exchange coverage this way every day in those states), but we're looking at nearly 17 million losing their employment in the past 3 weeks...the vast majority of whom are also losing their healthcare coverage in the process. The normal SEP system isn't designed for that massive surge and is no doubt causing as much confusion and chaos as the overwhelmed unemployment insurance systems in some states.

In short, the federal ACA exchange (HealthCare.Gov) absolutely needs to launch an official COVID-19 SEP which doesn't require documentation / verification of coverage loss. The simplest policy would be to simply open it up to anyone currently uninsured who'd otherwise be eligible to enroll during Open Enrollment.

You can check out all the wonky methodology and number crunching in my original post, but in the end I concluded that:

Today I'm going one step further and attempting to break out that estimate by state. Three important caveats:

Given Idaho's situation, there's really no way for me to hazard a guess at how much of a difference a "full" SEP would make, so I'm setting the state aside.

With that in mind, I've prepared two sets of estimates: One which only assumes the first ~5.6 million to lose their jobs, and one which assumes the full 16.8 million to file for unemployment over the 3-week period...which happens to be exactly 3 times as many.

To continue the example above: California holds 12% of the U.S. population...but only 6.4% of March 21st unemployment claims. This jumped to 17.7% for March 28th, however, and comes in at 14.0% for the two weeks combined. They haven't posted the third week (thru April 4th) yet.

By contrast, my own state of Michigan only holds 2.3% of all ACA exchange enrollments, but filed 4.4% of the first unemployment wave and 5.1% of the second wave, or 4.9% between the two.

I've therefore broken out both the "low" and "high" totals (~593K and ~1.78 million) using a different methodology based on what portion of total unemployment claims each state holds.

Here's what all four estimates look like. The totals based on actual Open Enrollment numbers are slightly higher than my estimates yesterday due to the actual state-based exchange data not quite matching my assumptions, but it's pretty close (603,000 - 1.81 million). The totals based on two weeks of unemployment filings are lower at both the low and high ends: 570,000 - 1.61 million...but again, still within ten percent: 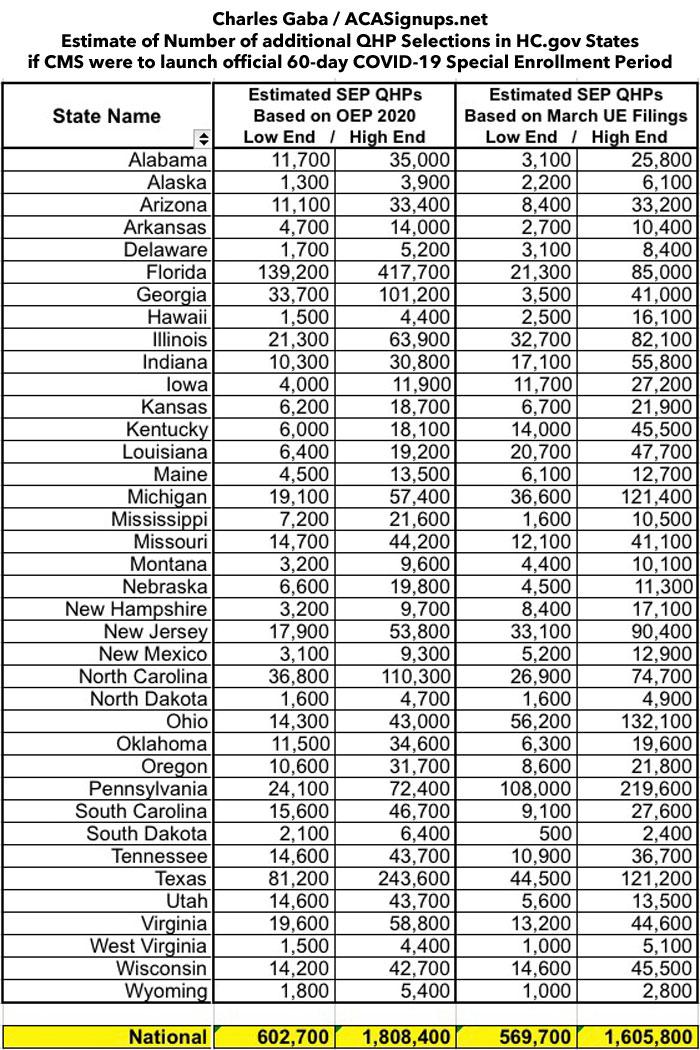 As you can see, Michigan ranges from around 19,000 - 57,000 using the first methodology...but 36,000 - 121,000 when based on unemployment figures, since our "shelter at home" crackdown was issued on March 23rd (and various significant levels of shutdowns had already been issued in the week or so before that).

Conversely, Florida ranges from 139,000 - 417,000 based on Open Enrollment figures...but only 21,000 - 85,000 based on unemployment figures. Why? In large part because Florida Governor Ron DeSantis didn't issue his "shelter at home" order until April 1st...and prior to that, he'd only issued relatively weak, minimal shutdown orders until then. Of course Florida also has the problem of a horrific nightmare of an unemployment filing system as well, so some of the discrepancy could simply be people not even being able to file in the first place. Both of these factors make it likely that Florida's pool of those eligible for a "lost coverage" SEP will grow dramatically over the coming weeks...

UPDATE 4/16: Welp. My estimates above are already out of date. The latest unemployment filing report just came out and we're now up to a whopping 22 million Americans losing their jobs in the past four weeks. Instead of a range of 600K - 1.8 million via HC.gov states, I'm making my old high-end estimate the new low-end estimate. That means my new range now runs from 1.8 million - 2.35 million.

I've gone back and downloaded the third week's report (through April 4th) from BLS, and have updated my calculations and estimates accordingly: