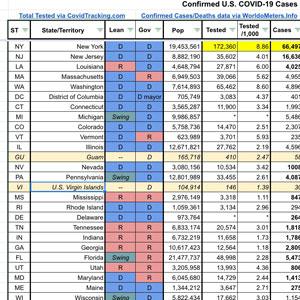 Nearly seven years ago I made my mark in the world by becoming known as the Obamacare Enrollment Guy here at ACASignups.net.

I’m still posting updates, of course, but lately, about 95% of what I’m writing about and analyzing, like everyone else in the country, is related to the ongoing COVID-19 pandemic.

As I noted back on March 11th, this time around I’m not the one doing the hard work of actually gathering the data itself. Several other outlets/organizations have taken up the grim task of keeping a running tally of how many people have tested positive for coronavirus, how many are hospitalized, how many have died and how many have recovered.

Two of the most popular and reputable sources I've found so far are WorldoMeter and The COVID Tracking Project. Worldometer seems to have more up-to-date data on confirmed cases and deaths from the virus, while the COVID Tracking Project also keeps track of how many people have actually been tested total (including negatives). They also keep tabs on pending test results and hospitalizations.

What I have done is to create an ambitious spreadsheet which puts the corresponding data from both sites together, with a few additional twists:

I'm quite serious. On March 27th at 10am, I cynically Tweeted out the following:

Problem with this is that Trump will FLOOD red states with money, equipment and resources after starving the blue states. #MAGA will praise him for it. Then again, he’s failed to do so for swing state Michigan so far because we have a Dem Governor, so... https://t.co/ULELuUcxqc

MA received 17% of requested medical supplies from the Trump admin. ME: 5%. CO: 1 day's worth.

FL got everything they requested. + an identical shipment the next week. oh, and a 3rd is on the way.

Sure enough, as you can see, so far the first 15 states or territories on a per capita confirmed case basis are either solidly Democratic, have a Democratic Governor (Louisiana, Michigan, Pennsylvania) or are considered “irrelevant” by Trump from an Electoral College POV (Guam, US Virgin Islands). As of today, the first fully Republican-controlled state is Mississippi.

Even from a cold-hearted political POV you might think Trump would be sucking up to Michigan and Pennsylvania since they’re swing states...but his pettiness and ego won’t let him do so: They both have Democratic governors who are refusing to kiss his ass, therefore they must be "punished" in his view.

Swing states with Republican governors, on the other hand, are a different matter: He’s already giving Florida more than they asked for, and my guess is that he’ll be generous with Mississippi, Georgia, Indiana (Pence’s home state!) and Tennessee in the coming weeks as well if they start moving up the per capita case chart.

By default the spreadsheet is sorted by per capita confirmed cases (the yellow column header in the middle). To sort it differently:

I plan on updating the spreadsheet with a new worksheet every evening, which will let me pull the data from the previous day into the daily % increase columns

I pray this will be a short-lived project, because if it's necessary for as long as ACASignups.net itself has, we're in serious trouble. :(