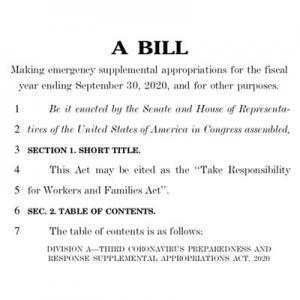 Dave Anderson brought this to my attention in the big "Take Responsibility for Workers and Families Act" coronavirus stimulus/relief bill being rolled out today as an alternative to the Senate Republican's "$500 billion corporate slush fund" bill being pushed by Mitch McConnell.

If you scroll allllllllll the way down to Pages 1,088 - 1,090, there are two provisions which relate directly to the Affordable Care Act's Advance Premium Tax Credits for exchange enrollees:

SEC. 103. RESTORATION OF LIMITATIONS ON RECONCILIATION OF TAX CREDITS FOR COVERAGE UNDER A QUALIFIED HEALTH PLAN WITH ADVANCE PAYMENTS OF SUCH CREDIT.

‘‘(i) IN GENERAL.—In the case of a taxpayer whose household income is less than 500 percent of the poverty line for the size of the family involved for the taxable year, the amount of the increase under subparagraph (A) shall in no event exceed the applicable dollar amount determined in accordance with the following table (one-half of such amount in the case of a taxpayer whose tax is determined under section 1(c) for the taxable year):

b) EFFECTIVE DATE.—The amendments made by this section shall apply to taxable years beginning after December 31, 2019.

This provision is less noteworthy than it appears. It basically puts caps on how much of their financial subsidies ACA exchange enrollees have to pay back to the federal government when they file their taxes the following year if they underestimate their annual income when they enrolled in coverage. In other words, let's say you're a single adult who earns, say, $30,000/year (around 240% FPL). The benchmark Silver ACA exchange plan is $600/mo at full price. You enter $30,000 as your projected income and thus qualify for $400/mo in subsidies ($4,800) on the benchmark Silver plan, bringing your premiums down to around $200/mo (8% of your income).

But what happens if you screwed up and underestimated your income? Let's say you end up earning $40,000 the following year instead of $30,000. That means you earned 320% FPL and "should" only have qualified for $355/mo in subsidies ($4,260). You have to pay back the $540 difference when you file your taxes the following spring.

(c) EFFECTIVE DATE.—The amendments made by this section shall apply to taxable years beginning after December 31, 2020.

If the table above looks familiar, there's a reason for that: It's a revised version of Rep. Lauren Underwood's "Health Care Affordability Act of 2019" bill, aka the #KillTheCliff bill.

It's actually somewhat more generous than Underwood's version for those earning less than 400% FPL. Here's the two side by side:

I'm all for this bill, of course--I met with over a dozen House staffers back in January specifically to push for them to support it, with some success--but it'll be interesting to see if it makes it through both the House and Senate under the circumstances.

Normally I'm not a fan of squeezing in "wish list items" into "must-pass" omnibus bills, but killing the ACA's subsidy cliff and making the subsidy formula more generous is extremely relevant to the ongoing COVID-19 pandemic crisis, so I'm completely onboard with it being included here.