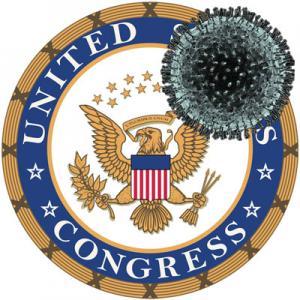 Last week I noted that House Democrats introduced the Families First Coronavirus Response Act, which includes a whole mess of important measures to deal with the economic and public health crisis fallout of the global pandemic. This act is by no means all that's needed, but it's an important start. The bill included, among other things, additional/emergency funding for:

FMAP stands for Federal Medical Assistance Percentages. It's basically the percentage of the cost of Medicaid which is paid for by the federal government (with the balance being paid for by the states). This percentage varies widely from as low as 50% in 12 states to as high as 78% in Mississippi:

This calculation is based upon a formula which compares individual state income to the continental United States income in order to determine ratios the federal government will utilize in assisting each state under the Act. This section also provides that no state's ratio will go lower than 50% or higher than 83%.

Anyway, Section 109 (page 118 of the legislative text) clarifies that the FMAP threshold would be bumped up by 8 percentage points during the designated emergency period for every state, as well as DC, Puerto Rico, American Samoa etc.

Well, after some tweaks & modifications, the bill passed with rare bipartisan support in both the House (363 to 40, with 1 voting "present" and 26 not voting at all) and then, yesterday, the Senate (90 to 8, with 2 Senators not voting at all).

I'm not sure about most of the changes, but I do know that the FMAP increase was shrunk down a bit; instead of 8 percentage points, in the end it's 6.2 points. However, there's another important provision noted by Joan Alker:

States get 6.2% increase in their match rate, but during the period of the emergency they cannot terminate ANYONE on Medicaid for any reason.

They can not raise premiums or impose new barriers to coverage like work requirements.

Sure enough, here's the relevant text of the bill as passed and, yes, signed into law by Donald Trump already:

(a) In General.—Subject to subsection (b), for each calendar quarter occurring during the period beginning on the first day of the emergency period defined in paragraph (1)(B) of section 1135(g) of the Social Security Act (42 U.S.C. 1320b–5(g)) and ending on the last day of the calendar quarter in which the last day of such emergency period occurs, the Federal medical assistance percentage determined for each State, including the District of Columbia, American Samoa, Guam, the Commonwealth of the Northern Mariana Islands, Puerto Rico, and the United States Virgin Islands, under section 1905(b) of the Social Security Act (42 U.S.C. 1396d(b)) shall be increased by 6.2 percentage points.

(1) eligibility standards, methodologies, or procedures under the State plan of such State under title XIX of the Social Security Act (42 U.S.C. 1396 et seq.) (including any waiver under such title or section 1115 of such Act (42 U.S.C. 1315)) are more restrictive during such quarter than the eligibility standards, methodologies, or procedures, respectively, under such plan (or waiver) as in effect on January 1, 2020;

(3) the State fails to provide that an individual who is enrolled for benefits under such plan (or waiver) as of the date of enactment of this section or enrolls for benefits under such plan (or waiver) during the period beginning on such date of enactment and ending the last day of the month in which the emergency period described in subsection (a) ends shall be treated as eligible for such benefits through the end of the month in which such emergency period ends unless the individual requests a voluntary termination of eligibility or the individual ceases to be a resident of the State; or

(4) the State does not provide coverage under such plan (or waiver), without the imposition of cost sharing, during such quarter for any testing services and treatments for COVID–19, including vaccines, specialized equipment, and therapies.

That's huge. Technically speaking, the states can keep doing the above things, it's just that they'll lose the 6.2 point federal funding bump if they do so...and as I noted before, that'd amount to hundreds of millions of dollars or even several billion dollars for each state.

For the record, here's the 40 House & 8 Senate members who voted against the bill...all of whom are Republicans: