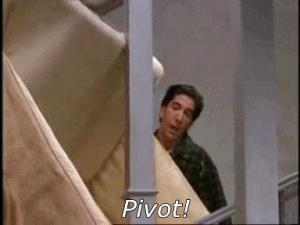 For what it's worth, while it pains me to make the comparison, that does sound eerily close to people who kept saying to take Trump "seriously but not literally" on any number of his more outlandish-sounding campaign promises in 2016.

As an aside, as of this writing Bernie's bill only has 15 cosponsors...including Kamala Harris and Elizabeth Warren, both of whom have backed away from it to some degree or another since. The House version has a more impressive 119 cosponsors at the moment, but that's still only 54% of those needed. For comparison, the House ACA 2.0 bill (H.R. 1884) has 161 total cosponsors. Obviously the bill would pick up some additional votes if a President Bernie, Speaker Pelosi & Senate Majority Leader Schumer put their full forces behind it and it was actually put on the floor...but it would also likely lose some support as well.

Anyway, today, freshman New York Congresswoman and social media sensation Alexandria Ocasio-Cortez followed up by basically admitting that the whole "Medicare for All or Bust!" thing is likely to be hooey after all:

Anyone who thinks electing Sen. Bernie Sanders (I-Vt.) president means that Medicare for All would become law has an unrealistic view of lawmaking. And it’s not just health care. Every component of his agenda that requires Congress would be a tough slog. But what even more sophisticated voters might not understand is how resigned some of the most liberal voices in Congress are to their inability to get items like Medicare for All.

Ocasio-Cortez ― one of the most outspoken advocates for Medicare for All ― said she thought voters understood there was an “inherent check” on the president’s ability to actually change things like our health care system. And she argued that the realities of governing were actually an argument for someone like Sanders, as he’d be able to push Democrats and resulting changes further left.

But Ocasio-Cortez is also realistic about how far even a President Sanders could actually move Congress.

“The worst-case scenario? We compromise deeply and we end up getting a public option. Is that a nightmare? I don’t think so,” she said.

Ocasio-Cortez stressed that just getting a public option for health care wasn’t the left’s ultimate goal. But she also said she wasn’t here to railroad other members with differing viewpoints on health care ― she just thinks it helps to have a president who has a more ambitious platform than Congress so that Democrats could stretch what’s possible.

The thing is, I'm not criticizing AOC for anything here--she's absolutely correct about all of it.

However, as I noted in a thread which received some buzz yesterday in response to Grim, before the above article was published:

I'm well aware of how the Overton Window works. I know there's a big difference between the poetry of campaigning and the prose of governing. I also know that Bernie Sanders understands the distinction--he's been a member of Congress or a Senator for 30 years, for God's sake. My problem with Bernie--and with a significant chunk of his supporters--is NOT that they push for Big Sweeping Progressive Reform. I may not think his "pure" M4All bill is the right solution to push at this particular time, but I'm perfectly fine w/them pushing for it.

No, my problem with him & a chunk of his base is that they SNEER and INSULT and ATTACK anyone ELSE who acknowledges how the sausage is actually made--that there's sometimes a difference between what you campaign on in the primary, what you campaign on in the general, what you actually push for once you're in office, what you're personally willing to accept, and what you're actually willing to SIGN INTO LAW once something IS passed through the House Committees, Senate Committees, full House & full Senate.

Some M4All activists openly acknowledge that they're only pushing M4All because they want to negotiate down from there. I respect that even if I disagree with the strategy because I think it's gonna prevent them from ever being in a position to negotiate ANYTHING.

What I can't respect is treating OTHERS who ALSO acknowledge that policy is the art of compromise as if it's a dirty word. When Warren admitted it'll take at least two major bills passed a few years apart, she was crucified...when Bernie admits the same thing, he's a genius??

There's an old Bloom County which illustrates how a certain contingent of Bernie/M4A supporters have been approaching the debate until now (click for higher-res version):

As for the "Overton Window" strategy itself (starting off with an extreme demand with the understanding that it will be negotiated down to half a loaf), I actually agree with it...up to a point.

President Obama was often accused of "starting negotiations on the 50-yard line"...which is to say, may people criticized him for "negotiating with himself" before he even began to negotiate with Republicans on various policies, and I think that's a fair assessment in some cases.

HOWEVER, while it's true that you shouldn't start negotiations on the 50-yard line, you do at least have to be inside the stadium in the first place.

In the case of healthcare reform, Bernie isn't going to be in any position to negotiate starting in the end zone (ie, his "pure" Medicare for All bill with zero premiums, zero deductibles, zero co-pays, zero coinsurance, 100% actuarial value, 100% universal coverage (including undocumented immigrants), 100% comprehensive care (including federally-funded abortion) and so on unless he actually wins the Presidency and is able to get 60 Senators to vote for it and at least 218 Representatives to vote for it and a Supreme Court which won't strike down the whole thing and a bunch of other stuff...and some of that simply isn't going to happen under any circumstances.

However, it goes further than that, as explained in this excellent thread by a union contract negotiator:

But that's not the worst case scenario. This question is analogous to a misunderstanding of contract negotiations that a number of people have, and I spent most of my union career trying to explain...

The thinking is that because negotiations involve give and take, if you ask for the sky, you will end up with a better bargain in the end. But that ignores the role of power and leverage in negotiations, and treats it as if it were a card game.

But a maximum demand, without the power and leverage to move it at the table, can just expose the weakness in your negotiating position, and leave you with less, not more.

Moreover, maximum demands often become implicit over-promises to your base, leaving them severely disappointed. That will only be accentuated if you are also not able to achieve the more realizable goal, because your strategy so overextended your leverage to obtain concessions.

Smart negotiations requires careful calibration between your demands and your power and leverage to extract them. Another way to approach this would be to say that a public option is all that could be won in a post-2020 election Senate.

This is especially the case, if you leave the filibuster intact and so need 60+ votes, as Sanders wants. Best case scenarios now have Democrats with 52-53 seats, including anti-M4A seats.

If one started out with a public option as realistic goal for 2020, then you could work on questions of how to make it strong. A fight worth having is whether one would have to opt out of public option, as opposed to opt in.

An opt out would put public option in a much stronger position, while taking away the 'people should be able to choose' argument.

Here's the problem: What if you walk into your bosses' office demanding a million dollar raise?

If you do that, then not only are you not going to get your $5,000 raise...there's a good chance you won't receive any raise at all...and a small chance you'll be fired on the spot.

P.S. I also gotta wonder if these folks will do any soul searching or self reflection now?

Why do you keep making this about intent? Intent in the law can take you from manslaugher to homicide, but either way someone is dead.

The effect of not supporting Medicare for all is that people will die. And it is fair and honest to point that out.

I’ve had two friends die because they didn’t have access to healthcare. If you oppose m4a, you do want people to continue to die. #m4a #facts