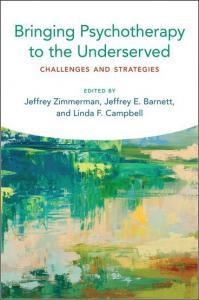 OK, technically I'm officially a published author of half of one chapter of an academic textbook.

Nearly two years ago I was contacted by an online friend of mine, Gordon Herz, PhD of Forward Psychology Group, LLC, asking whether I'd be interested in co-authoring a chapter for an academic text being published by Oxford University Press. I'd never done anything like this before, but decided to give it a shot, and after some revisions and editing, voila, here it is:

Bringing Psychotherapy to the Underserved examines the challenging problem of providing psychotherapy services to underserved, often marginalized populations, both within and outside of the US. The book begins by addressing systemic factors that prevent certain populations from accessing services (health system issues, issues relating to the military, and natural and man-made disasters). Expert contributors then addresses those underserved due to discrimination (ethnic minorities, the economically disadvantaged, sexual and gender minorities, and so on).

The following section of the book focuses on populations in transition and in undeserved locations (civilians and refugees of war, immigrants, and those in rural areas). Next are addressed those people who are often overlooked, such as children, older adults, and those with intellectual and developmental disabilities. Each of these chapters discusses the scope of the problem, barriers to service delivery, creating cultural competency, effective strategies and empirically-supported treatments, and future steps. The book closes by addressing ethical and research challenges relevant to bringing psychotherapy services to these groups.

Dr. Herz actually did most of the work. I just rambled on with a light overview of the pre- and post-ACA health insurance landscape, but if it helps some readers get a few of the basics straight, I'm glad to hear it!

As a nice little bonus, our chapter is the very first one, setting the stage for the rest of the book.