Watch a top candidate running for the Democratic Presidential nomination issue a strong argument in favor of a robust Public Option. 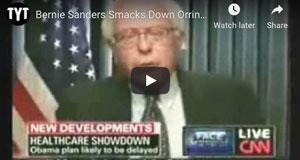 Nope. This is none other than Senator Bernie Sanders of Vermont from July 2009, issuing a strong and vigorous argument in favor of adding a Medicare-like Public Option to the U.S. healthcare system to offer a "level playing field" and "fair competition" with private insurance.

I've cued up the video to the relevant starting point, but if it starts at the beginning for some reason, scroll up to 4:55 in. It runs until around 6:13.

Here's the transcript of Bernie during the section in question:

“No one is talking about a government-run healthcare system. No, they’re not. What they’re talking about is a public option that will compete and give people the choice! The choice of whether they want a public plan or a private plan! Why are you afraid of that? If the private plans are so much better, people will go into the private plan. If the public plans are more cost effective, more reasonable, if people prefer a Medicare-type program they’ll go into that. Why are you afraid of the competition?

...This is a level playing field, and I think that it’s interesting that the health insurance people, who are spending a million dollars a day lobbying Congress, putting huge amounts of money into campaign contributions are afraid of that competition. I think that the American people are sick and tired of the private health insurance companies who’ve been ripping them off for years, and they want to see some competition."

The icing on the cake? As you may have noticed, this clip (from CNN when Lou Dobbs was still on the network) was salvaged and highlighted by repulsive misogynist Cenk Uygur of The Young Turks.

Public Option
Medicare for All
2020 Election